Yet another study shows the damage that zero-calorie sweeteners pose to the gut microbiome. About 20% of people above age two in America consume two diet soft drinks per day.  A majority of diet soda drinkers are women. Multiple clinical have shown have detrimental health effects related to non-nutritive sweeteners (NNS), as seen with sugar, even when doses below the acceptable daily intake (ADI) limit determined by the FDA. Is normal intake of NNS enough to negatively affect health of women, their infants and children?

For the first time, scientists exposed pregnant and lactating mice to sucralose and acesulfame-K – a common combination in soda, sports supplements and other sweetened products – and found their pups developed harmful metabolic and gut bacteria changes. Though, this latest study is an animal study, this new data, published in Frontiers in Microbiology, is enough to remind women of childbearing age, pregnant women and lactating women to avoid regular consumption of  sucralose and acesulfame-K in beverages, foods and personal care products.

The problem with non-nutritive sweeteners

“Non-nutritive sweeteners are generally believed to be safe when used in moderation,” says Dr. John Hanover, a glycobiologist and senior author of the study at the U.S. National Institute of Diabetes and Digestive and Kidney Diseases (NIDDK), part of the National Institutes of Health.

“However, sweetness itself seems to some extent mimic the effects of sugar – triggering insulin secretion, inflammation and changes to the gut microbiome – which promote fat storage and type 2 diabetes,” Hanover adds.

Since sweeteners are known to be passed on in small amounts via the placenta and breast milk, the researchers asked whether similar metabolic and microbiome changes occur in offspring following maternal sweetener intake. They fed mouse moms one of three sweetener solutions throughout pregnancy and lactation, and analyzed the effects on their pre-weaned pups. The solutions contained a mixture of sucralose and acesulfame-K at the ‘acceptable daily intake’ (ADI), double the ADI, or a control (water). The ADI is the maximum consumption deemed safe in humans based on toxicology studies.

“Sweeteners are often used in combination, partly because a blend can reduce the unpleasant bitter taste that some consumers experience,” explains Dr. Kristina Rother, Chief of the Section on Pediatric Diabetes and Metabolism at NIDDK. “Combining sweeteners might also amplify the metabolic and microbiome effects – so we used the typical pairing of sucralose and ace-K to maximize the applicability of our results,” said Dr. Stephanie Olivier-Van Stichelen, formerly at NIDDK and now Assistant Professor at Medical College of Wisconsin.

Analysis of blood, feces and urine from a total of 226 pups confirmed that both sweeteners are transmitted prenatally – and as predicted, affect the metabolism and microbiome of the offspring.

“Our results showed dose-dependent effects of sweetener exposure,” the 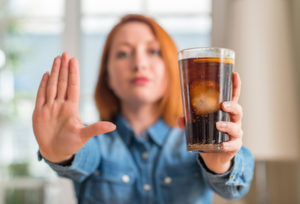 researchers report. Of note, the degree of metabolic change was far greater in the 2xADI than the ADI group. What’s more, further changes in sweetener-exposed pups – including lower weight and fasting blood glucose – only became prevalent in the 2xADI group. However, the microbiome changes were drastic even at the acceptable daily intake level.

Current recommendations for artificial sweetener use during pregnancy state that they may be used in moderation – except for saccharin, which should be avoided entirely. However, artificial sweeteners are now found in more products than ever – including mouthwash, toothpaste, and medicines, as well as food and drink – and since labels do not specify the amounts of added sweeteners, it is impossible to accurately track our intake.

“The results of the study highlight yet another potential health impact of zero-calorie sweeteners,” says Olivier-Van Stichelen.

Dr. Hanover concludes: “The perinatal period is a critical developmental stage for the microbiome and emerging detoxification systems in the rodent and human neonate alike, and our study defines potentially adverse consequences of early exposure to sweeteners. Therefore, based on our findings, zero-calorie sweeteners warrant further investigation in humans in this critical developmental window.”