As researchers learn more about fasting and dietary carbohydrate restriction, there is greater 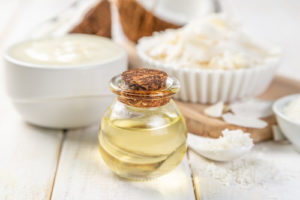 interest in ketones, β-hydroxybutyrate (β-HB) and acetoacetate (AcAc), which are produced by the liver in restricted eating conditions. In this study, published by Frontiers in Nutrition, researchers assessed the relationship between the change in plasma ketones, and octanoate, decanoate and dodecanoate in plasma total lipids during an 8 hour metabolic study day.

The following are the primary medium-chain fatty acids:

Previous studies using ketogenic therapies or diet, supplements or IV infusion, have shown beneficial effects on cognitive outcomes. A better understanding of the plasma medium-chain fatty acids (MCFA) and ketone response to various medium-chain triglycerides (MCT) could potentially help improve the formulation of ketogenic MCT supplements and might also provide a way of evaluating the compliance of patients and participants taking such supplements in clinical trials, especially in an older population experiencing cognitive decline.

Ketones provide up to 80% of the brain’s energy requirements during long-term fasting. Aside from energy or carbohydrate restriction, a common way to increase plasma ketones is by the ingestion of MCT, which provides MCFA, i.e., saturated fatty acids of 6–12 carbons in chain length. Mammalian milk, coconut oil and palm oil contain various types of MCFA. MCFA are considered ketogenic because they are more rapidly metabolized than long-chain fatty acids.

Unlike long-chain fatty acids (≥14 carbons), which are absorbed via the lymphatic system and incorporated into circulating chylomicrons before reaching the liver, 8 and 10 carbon MCFA reach the liver directly via the portal vein. Eight-carbon MCFA are also more rapidly oxidized compared to long-chain fatty acids, because they cross the mitochondrial inner membrane without carnitine-dependent transport.

Methods/ For clarity, in this study, the abbreviations—C8, C10, and C12—are used when referring to the dietary supplement provided, whereas the full names—octanoate, decanoate, and dodecanoate—are used when referring to the plasma levels of these MCFA. In this study, subjects consumed the first 20 ml dose of the homogenized test oil is taken with breakfast and a second 20 ml dose is taken 4 h later without an accompanying meal. A total of n = 9 people (n = 7 men and n = 2 women) completed all the tests except for C10 (n = 8).

On each metabolic study day, participants arrived at 7:30 a.m. after a 12 h overnight fast and a minimum of 24 h without alcohol intake. A forearm venous catheter was inserted and a fasting baseline blood sample was withdrawn (Time 0). At about 8 a.m., participants received the standard breakfast during which they also consumed the test or CTL drink. The breakfast consisted of two pieces of toast with raspberry jam, a piece of cheese, and two scrambled eggs (total of 470 calories, 19.5 g of fat, 24.2 g of protein and 55 g of carbohydrate). Four hours later (at about noon), a second dose of the test drink was given but with no other food. Water was available ad libitum throughout the study day.

Venous forearm blood samples were taken in EDTA tubes as baseline (pre-dose) and every 30 min during the 8 h study period, with the first post-dose sample taken 30 min after the test drink was consumed. Blood samples were centrifuged at 2846 G for 10 min at 4°C and plasma stored at −80°C until analyzed.

The objectives of the present study were to assess:

Results / This study demonstrates that there is a significantly greater ketogenic effect in humans of an oral dose of C8 compared to C10 or C12. This is due to a difference in their effect on ketogenesis, and not to substantially different increases in the levels of octanoate, decanoate or dodecanoate in plasma total lipids after an oral dose of these MCT.

Also shown here is that in relation to changes in plasma MCFA, C8 has a significantly stronger dose response effect on plasma ketones than C10 or C12.

How Does Eating a Meal Affect Ketogenesis?

The design this metabolic study allowed for the researchers to evaluate the effect of consuming a meal on the plasma ketone and MCFA responses to the test substances. Here is what they found:

Conclusion/ The C8 was the most ketogenic supplement evaluated in these one-day metabolic tests. The C10 was poorly ketogenic but may promote glycolysis and lactate release in astrocytes, which could improve mitochondrial function and contribute to an anti-epileptic effect by inhibiting the α-amino-3-hydroxy-5-methyl-4-isoxazolepropionic acid (AMPA) receptor. Further research is needed to determine whether there are biological effects of C8, C10, or C12 in humans independent of their effects on ketogenesis.