Age-Related Immunity Loss May be the “Graying” of T Cells, says Harvard Research 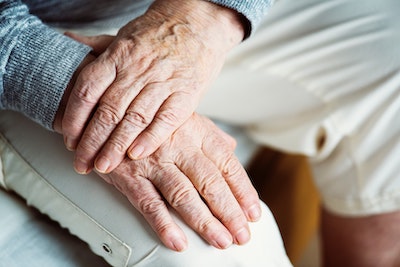 Age-related immunity loss is more than evident in the elderly who suffer more serious complications from infections and benefit less from vaccination than the general population. Scientists have long known that a weakened immune system is to blame but the exact mechanisms behind this lagging immunity have remained largely unknown. Now research led by investigators at Harvard Medical School suggests that weakened metabolism of immune T cells may be partly to blame.

The findings, published Dec. 10 in PNAS and based on experiments in mouse immune cells, pinpoint a specific metabolic pathway called one-carbon metabolism that is deficient in the aged T cells of rodents. The work also suggests possible ways to restore weakened immune function with the use of small-molecule compounds that boost T-cell performance.

We believe our findings may help explain the basic malfunction that drives loss of immune defenses with age,” said senior study author Marcia Haigis, professor of cell biology in the Blavatnik Institute at Harvard Medical School. “If affirmed in further studies, we hope that our findings can set the stage for the development of therapies to improve immune function.”

The role of T cells in the immune system is twofold: attacking illness-causing cells like bacteria, viruses and cancer and “remembering” past invaders—the body’s way of ensuring that it can spot a threat and mount a rapid defense during subsequent encounters with the same pathogens. In a healthy person, T cells circulate in the blood and quietly scan the body for threats using proteins on the cell’s surface. If a T cell encounters another cell it deems dangerous, the T cell undergoes activation, a molecular cascade in which it switches from surveillance mode to attack mode. The activated cells then rapidly replicate to build an army and destroy the enemy. 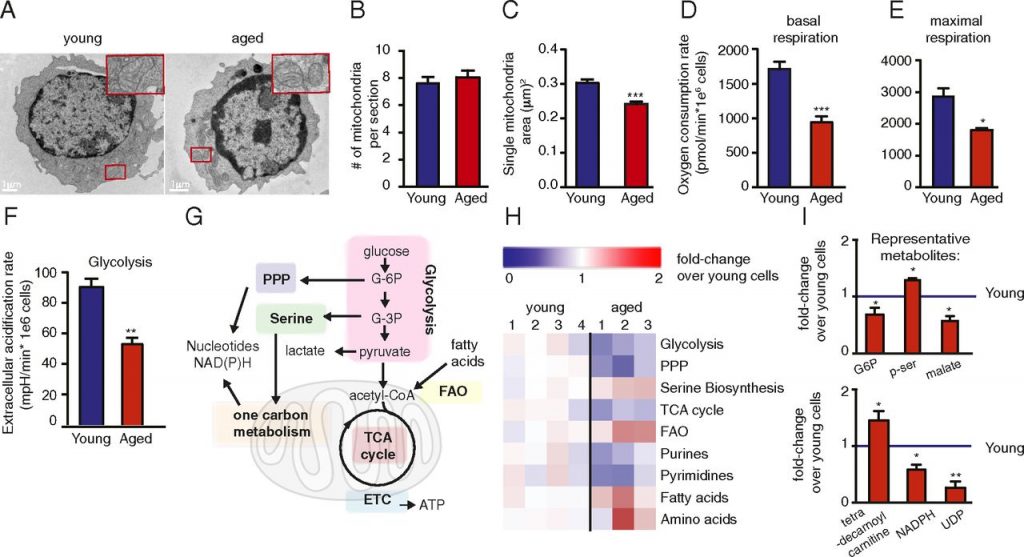 First, the researchers looked for overall differences between old and young T cells. They isolated T cells from the spleens of young and old mice and noticed that, in general, older mice had fewer T cells (see Figure 1).  Next, to gauge the cells’ immune fitness, the researchers activated the T cells by mimicking signals normally turned on by pathogens during infection. The older T cells showed diminished activation and overall function in response to these alarm signals. Specifically, they grew more slowly, secreted fewer immune-signaling molecules and died at a much faster rate than young T cells. The researchers also observed that aged T cells had lower metabolism, consumed less oxygen and broke down sugars less efficiently. They also had smaller than normal mitochondria, the cells’ power-generators that keep them alive.

It was as if these older immune cells had lost their “appetite” and their ability to process fuel into energy, Haigis and her colleagues observed.

To pinpoint the metabolic pathways behind this malfunction, the scientists analyzed all the different proteins in the cells, including those that might be important for coaxing a T cell from dormancy into a fighting state. The team found that the levels of some 150 proteins were lower-than-normal upon activation of the aged T cells, compared with young T cells. About 40 proteins showed higher than normal levels in aged versus young T cells. Many of these proteins have unknown functions, but the researchers found that proteins involved a specific type of metabolism, called one-carbon metabolism, were reduced by nearly 35 percent in aged T cells.

One-carbon metabolism comprises a set of chemical reactions that take place in the cell’s mitochondria and the cell cytosol to produce amino acids and nucleotides, the building blocks of proteins and DNA. This process is critical for cellular replication because it supplies the biologic material for building new cells.

The team’s previous work had shown that one-carbon metabolism plays a central role in supplying essential biological building blocks for the growing army of T cells during infection. So, the scientists wondered, could adding the products of this pathway to weakened T cells restore their fitness and function?

The researchers caution that while encouraging, the effects were observed solely in mouse cells in lab dishes rather than in animals and must be confirmed in further experiments.

Conclusion / T cell-mediated immune responses are compromised in aged individuals, leading to increased morbidity and reduced response to vaccination. Finding new ways to boost T cell immunity in the elderly is key for enhancing their immune competence. In this work, the researchers performed a systematic analysis of proteins and metabolites in young versus aged T cells. Metabolic rewiring occurs in young T cells following stimulation but is dampened in aged T cells. Moreover, they show that aged T cell functions can be enhanced by metabolite addition.