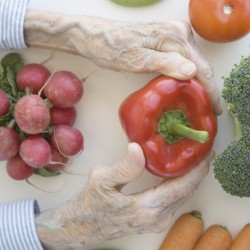 A new study from Baylor College of Medicine shows that findings supplementing GlyNAC, a combination of glycine and N-acetylcysteine, corrects glutathione deficiencies in humans with HIV, thus reversing premature aging, and could have implications beyond HIV, pending further investigations.

Premature aging in people with HIV is now recognized as a new, significant public health challenge. Accumulating evidence shows that people with HIV who are between 45 to 60 years old develop characteristics typically observed in people without HIV that are more than 70 years of age. For instance, declining gait speed, physical function and cognition, mitochondrial aging, elevated inflammation, immune dysfunction, frailty and other health conditions are significantly higher in people with HIV when compared to age- and sex-matched uninfected people.

At Baylor College of Medicine, endocrinologist Dr. Rajagopal Sekhar, associate professor of medicine-endocrinology, and his team have found themselves in the right place at the right time to study premature aging in people with HIV. For the last 20 years, they have been studying natural aging in older humans and aged mice in the Section of Endocrinology, Diabetes and Metabolism of the Department of Medicine.

Sekhar’s years-long expertise, knowledge and interest in metabolic disorders affecting HIV patients and a parallel track investigating non-HIV people have resulted in a better understanding of why we age.

“The work presented here, published in the journal Biomedicines, builds a bridge between laboratory bench and bedside by showing proof-of-concept that supplementing people with HIV specifically with a combination of glycine and N-acetylcysteine, which we call GlyNAC, as precursors of glutathione, a major antioxidant produced by the body, improves multiple deficits associated with premature aging,” said Sekhar.

Why is Aging Accelerated?

“The free radicals produced during fuel burning in the mitochondria can be compared to some of the waste products produced by a car’s combustion engine, some of which are removed by the oil filter,” Sekhar said. “If we don’t change the oil filter periodically, the car’s engine will diminish its performance and give less mileage.”

Sekhar and his colleagues have been studying mitochondrial function and glutathione for more than 20 years. Their findings, and those of other researchers, have shown that glutathione is the ultimate natural antioxidant.

Interestingly, compared to those in younger people, glutathione levels in older people are much lower, and the levels of oxidative stress are much higher. Glutathione levels also are lower and oxidative stress is higher in conditions associated with mitochondrial dysfunction, including ageing, HIV infection, diabetes, neurodegenerative disorders, cardiovascular disorders, neurometabolic diseases, cancer, obesity and other conditions.

“When the mitochondrial batteries are running low on power, as a medical and scientific community, we do not know how to recharge these batteries,” Sekhar said. “Which raised the question, if the levels of glutathione were restored in cells, would the mitochondria be recharged and able to provide power to the cell? Would restoring mitochondrial functioning improve conditions associated with mitochondrial dysfunction?”

Restoring glutathione in cells was not straightforward because glutathione cannot work if taken orally for the same reasons that diabetic patients cannot eat insulin. It would be digested before it reached the cells. Also, providing glutathione in the blood cannot correct glutathione deficiency because every cell makes its own.

“Glutathione is a small protein made of three building blocks: amino acids cysteine, glycine and glutamic acid. We found that people with glutathione deficiency also were deficient in cysteine and glycine, but not glutamic acid,” Sekhar said. “We then tested whether restoring deficient glutathione precursors would help cells replenish their glutathione. But there’s another catch, because cysteine cannot be given as such, we had to supplement it in another form called N-acetylcysteine.”

In past studies, Sekhar and his colleagues determined that supplementing GlyNAC, a combination of glycine and N-acetylcysteine, corrected glutathione deficiency inside the cells of naturally aged mice to the levels found in younger mice. Interestingly, the levels of glutathione and mitochondrial function, which were lower in older mice before taking GlyNAC, and oxidative stress, which was higher before GlyNAC, also were comparable to those found in younger mice after taking GlyNAC for six weeks.

In past clinical trials, Sekhar provided GlyNAC to small groups of people to correct a nutritional deficiency, and produced encouraging evidence supporting further studies of the value of this approach to restoring mitochondrial function in clinical trials.

In the current study, Sekhar and his colleagues conducted an open-label clinical trial that included six men and two women with HIV, and eight age-, gender- and body mass index-matched uninfected controls, all between 45 and 60 years old. The people with HIV were on stable antiretroviral therapy and had not been hospitalized for six months prior to the study.

The results are encouraging. GlyNAC supplementation for 12 weeks improved all the deficiencies indicated above. Some of the improvements declined eight weeks after stopping GlyNAC.

“It was exciting to see so many new beneficial effects of GlyNAC that have never been described before. Some of the most encouraging findings included reversal of some measures of cognitive decline, a significant condition in people with HIV, and also improved physical strength and other hallmark defects,” Sekhar said.

The salient findings are:

(3) Several accrued benefits receded 8 weeks after stopping GlyNAC. These findings could have implications for premature aging in PWH, and are discussed below.

“It was encouraging to see that GlyNAC can reverse many of these hallmark defects in people with HIV as there is no current treatment known to reverse these abnormalities. Our findings could have implications beyond HIV and need further investigation,” Sekhar said.

Overall, these findings in HIV patients provide proof-of-concept that dietary supplementation of GlyNAC improves multiple hallmarks of aging and that glutathione deficiency and oxidative stress could contribute to them.

Encouraged by these results, Sekhar has continued his investigations by testing the value of GlyNAC supplementation for improving the health of the growing older population, and has completed an open label trial, and another NIH-funded, double-blind, placebo-controlled trial in older adults.

“The results from these recently completed trials support the findings of the HIV study,” said Sekhar, who is currently the Principal Investigator of two NIH-funded randomized clinical trials studying the effect of GlyNAC in older humans with mild cognitive impairment, and with Alzheimer’s disease.

Conclusion/ This study suggests that GSH deficiency is associated with several defects linked to premature aging in HIV patients, and provides proof-of-concept that supplementing GlyNAC improves multiple key defects associated with premature aging in PWH including GSH deficiency, oxidative stress, impaired mitochondrial fuel oxidation, elevated inflammation, endothelial dysfunction, insulin resistance, genomic damage, strength, and cognitive defects. Dietary supplementation of GlyNAC could be developed as a simple, safe, and effective nutritional strategy to improve cellular aging and health of PWH. The results of this study supports the need for future trials to assess the effects of longer durations of GlyNAC supplementation and withdrawal in PWH, as well as in healthy individuals.