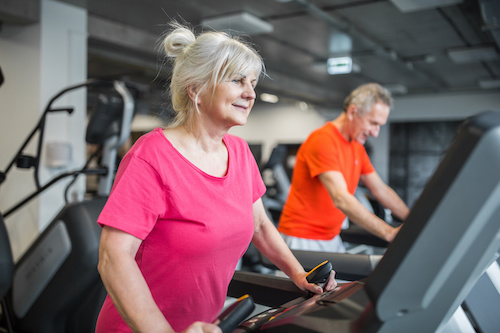 University of Iowa researchers found that a single bout of exercise improves cognitive functions and working memory in some older people. In experiments that included physical activity, brain scans, and working memory tests, the researchers noted that participants experienced the same cognitive benefits and improved memory from a single exercise session as they did from longer, regular exercise.

“One implication of this study is you could think of the benefits day by day,” says Michelle Voss, assistant professor in the Department of Psychological and Brain Sciences and the study’s corresponding author. “In terms of behavioral change and cognitive benefits from physical activity, you can say, ‘I’m just going to be active today. I’ll get a benefit.’ So, you don’t need to think of it like you’re going to train for a marathon to get some sort of optimal peak of performance. You just could work at it day by day to gain those benefits.”

Previous research has shown exercise can confer a mental boost. But the benefits vary: One person may improve cognitively and have improved memory, while another person may show little to no gain.

Limited research has been done on how a single bout of physical activity may affect cognition and working memory specifically in older populations, despite evidence that some brain functions slip as people age.

Voss wanted to tease out how a single session of exercise may affect older individuals. Her team enrolled 34 adults between 60 and 80 years of age who were healthy but not regularly active. Each participant rode a stationary bike on two separate occasions — with light and then more strenuous resistance when pedaling — for 20 minutes. Before and after each exercise session, each participant underwent a brain scan and completed a memory test.

In the brain scan, the researchers examined bursts of activity in regions known to be involved in the collection and sharing of memories. In the working-memory tests, each participant used a computer screen to look at a set of eight young adult faces that rotated every three seconds — flashcard style — and had to decide when a face is seen two “cards” previously matched the one they were currently viewing.

After a single exercise session, the researchers found in some individuals increased connectivity between the medial temporal (which surrounds the brain’s memory center, the hippocampus) and the parietal cortex and prefrontal cortex, two regions involved in cognition and memory. Those same individuals also performed better on the memory tests. Other individuals showed little to no gain.

The boost in cognition and memory from a single exercise session lasted only a short while for those who showed gains, the researchers found.

Benefits are Longer Lasting than Realized

“The benefits can be there a lot more quickly than people think,” Voss says. “The hope is that a lot of people will then keep it up because those benefits to the brain are temporary. Understanding exactly how long the benefits last after a single session, and why some benefit more than others, are exciting directions for future research.”

The participants also engaged in regular exercise, pedaling on a stationary bike for 50 minutes three times a week for three months. One group engaged in moderate-intensity pedaling, while another group had a mostly lighter workout in which the bike pedals moved for them.

Most individuals in the moderate and lighter-intensity groups showed mental benefits, judging by the brain scans and working memory tests given at the beginning and at the end of the three-month exercise period. But the brain gains were no greater than the improvements from when they had exercised a single time.

“The result that a single session of aerobic exercise mimics the effects of 12 weeks of training on performance has important implications both practically and theoretically,” the authors write.

The researchers note their study had a small participant pool, with a homogenous population that excluded anyone with chronic health conditions or who were taking beta-blockers.

To address those limitations, Voss has expanded her participant pool in a current, five-year study to confirm the initial findings and learn more about how exercise alters older people’s brains. The participants are healthy older individuals who are not physically active, similar to the participants’ profile in the study’s results reported here.

A study of older Australians has found a morning bout of moderate-intensity exercise improves cognitive performance like decision-making across the day compared to prolonged sitting without exercise.

Furthermore, the study showed that a morning bout of exercise combined with brief light-intensity walking breaks to frequently disrupt sitting throughout an 8-hour day can boost your short-term memory compared to uninterrupted sitting, according to the study published in the British Journal of Sports Medicine.

The ‘Brain Breaks’ study, led by the Baker Heart and Diabetes Institute and The University of Western Australia, also shows that the distinct responses in cognitive performance to exercise versus exercise and sitting breaks point to different patterns of physical activity being able to enhance distinct aspects of cognition.

The study of more than 65 males and females aged 55 — 80 years examined the effects of acute morning exercise on a treadmill with and without brief 3 minute walking breaks during an 8-hour day of prolonged sitting, and assessed aspects of cognition and concentration including psychomotor function; attention; executive function such as decision-making; visual learning and working memory.

Central to mediating the benefits of exercise on learning and memory is brain-derived neurotropic growth factor, a protein which plays an important role in the survival and growth of information-transmitting neurons in the brain. The results demonstrated that this protein was elevated for 8 hours during both exercise conditions, relative to prolonged sitting.

Physical activity researcher, Michael Wheeler says the study highlights that uninterrupted sitting should be avoided to maintain optimal cognition across the day, and that moderate-intensity exercise such as a brisk walk should be encouraged for the daily maintenance of brain health.

He says the study also reveals that not all aspects of cognition respond in the same way to a given dose of exercise and that it may be possible to manipulate the pattern of activity across the day to optimise specific cognitive outcomes.

“With an ageing population which is looking to live healthier for longer, these studies are critical to people enjoying a productive and satisfying quality of life,” Wheeler says.

“This study highlights how relatively simple changes to your daily routine could have a significant benefit to your cognitive health. It also reveals that one day we may be able to do specific types of exercise to enhance specific cognitive skills such as memory or learning.”

Michael J Wheeler, Daniel J Green1, Kathryn A Ellis, et al. Distinct effects of acute exercise and breaks in sitting on working memory and executive function in older adults: a three-arm, randomised cross-over trial to evaluate the effects of exercise with and without breaks in sitting on cognition. British Journal of Sports Medicine., 2019 DOI: 10.1136/bjsports-2018-100168