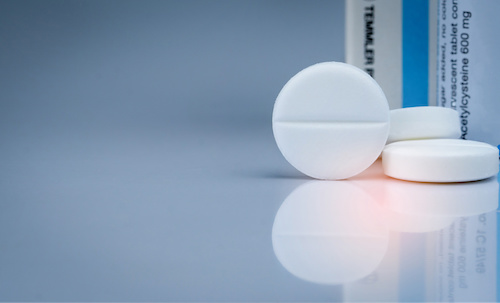 N-acetylcysteine (NAC), the naturally occurring molecule that replenishes antioxidants, shows improved brain metabolism and self-reported improvements in cognitive function in patients with multiple sclerosis, according to a study published in the journal, Frontiers in Neurology.

The study found improvements in brain metabolism, particularly in areas that support cognition such as the frontal and temporal lobes in patients with multiple sclerosis. In addition, patients reported qualitative improvements in their cognitive and attention focusing abilities. The study was performed by the Department of Integrative Medicine and Nutritional Sciences, as well as the Departments of Neurology and Radiology, at Thomas Jefferson University.

Current treatments for multiple sclerosis are generally limited to trying to slow the progression of the disease by preventing new brain lesions from occurring. However, these approaches do not help the neurons that have already been affected by the disease process. While the primary event of multiple sclerosis results from an immunological process that targets the white matter, the actual damage to neurons may be due in large part from oxidative stress caused by the immune reaction. NAC is an oral supplement, and also comes in an intravenous form that is used to protect the liver in acetaminophen overdose.

Several initial studies have shown that NAC administration increases glutathione levels in the brain. Because glutathione is an antioxidant, researchers have proposed that it could reduce the oxidative stress from the immune reaction, though it’s unclear whether it would improve the function of neurons. The current study tested this by tracking cerebral glucose metabolism on positron emission tomography (PET) brain, as a proxy for normal neuronal function.

“This study is an important step in understanding how NAC might work as a potentially new avenue for managing multiple sclerosis patients. The NAC appears to enable neurons to recover some of their metabolic function,” says senior author on the paper Daniel Monti, MD, Chairman of the Department of Integrative Medicine and Nutritional Sciences and Director of the Marcus Institute of Integrative Health at Thomas Jefferson University.

Researchers evaluated 24 patients with multiple sclerosis who continued their current treatment and were placed into two groups – the first group received a combination of oral and intravenous (IV) NAC for two months (in addition to their current treatment program); and the second group, the control patients, received only their standard-of-care treatment for multiple sclerosis for two months. Patients were not blinded. Those patients in the active group received 50mg/kg NAC intravenously once per week and 500mg NAC orally 2x per day on the non IV days.

All patients underwent brain scanning using FDG PET imaging which measures the amount of glucose metabolism in the neurons throughout the brain. This test was used to determine the level of neuronal recovery. Patients were evaluated initially and after two months of either receiving the NAC or standard of care therapy. Patients were also evaluated clinically using several different measures of brain function and quality of life.

“This is an exciting study that suggests a natural molecule such as NAC may help improve brain metabolism and symptoms in patients with multiple sclerosis,” says corresponding author and neuro-imaging expert Andrew Newberg, MD, Professor and Director of Research at the Department of Integrative Medicine and Nutritional Sciences. The investigators hope that this research will open up new avenues of treatment for multiple sclerosis patients.

The data suggest that FDG PET findings can help elucidate the clinical effects of MS lesions by determining the extent to which they cause neuronal dysfunction, something that cannot be determined simply by observing the presence of the lesion. Thus, it is our hope that this methodology of using FDG PET may be useful for future studies of MS therapies in general as well as those targeting oxidative stress in particular.

Conclusion/ The current study using FDG PET imaging suggests that NAC might positively impact cerebral glucose metabolism in MS patients, and this appears to be associated with improved symptoms related to cognition and attention. The next level of inquiry with a larger randomized, double blind, placebo controlled efficacy trial is warranted. In addition, objective measures of cognition and attention will be needed to further assess the impact of NAC on these symptoms in MS patients.