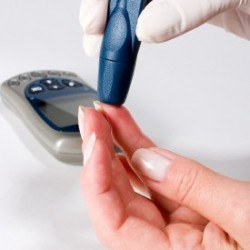 Diabetic patients taking the natural product goldenseal while taking the prescription drug metformin may be unwittingly sabotaging efforts to maintain healthy blood glucose levels, as reported in a study published in the journal Clinical Pharmacology & Therapeutics.

Metformin was included in a cocktail of selected drugs given to participants in a clinical study led by scientists at Washington State University’s College of Pharmacy and Pharmaceutical Sciences. The study sought to determine the impact of goldenseal on specific drug transporters, proteins that facilitate absorption or expulsion of drug molecules in different tissues such as the intestine, liver and kidney.

“After six days of taking goldenseal, participants had about 25 percent less metformin in their bodies, a statistically significant change that could potentially impact glucose control in patients with type 2 diabetes,” said the study’s first author James Nguyen, a Ph.D. candidate in pharmaceutical sciences and recent Doctor of Pharmacy graduate. He said the finding serves as a caution to health care providers and patients that over-the-counter natural product use can lead to unwanted drug interactions, which may lead to negative health outcomes.

Goldenseal is commonly used to self-treat digestive issues such as diarrhea and constipation, which are side effects of metformin. Goldenseal is also often combined with echinacea for self-treatments of the common cold and other respiratory tract infections.

Goldenseal is one of several natural products being studied by the researchers as part of the National Institutes of Health-funded Center of Excellence for Natural Product Drug Interaction Research as a Washington University led multidisciplinary effort to develop standardized approaches for studying interactions between natural products and pharmaceutical drugs.

The researchers note that gaps exists in understanding interactions between potential drug and natural products prior to entering the market.

“Our work in this goldenseal study helps lay the foundation for establishing best practices for studying these interactions, with a particular niche in transporter-mediated interactions,” Paine said.

One of the overarching goals of this recently published study was to determine whether established FDA basic mathematical models for predicting transporter-mediated drug-drug interactions could be used to successfully predict natural product-drug interactions.

These findings will help the researchers refine these models to increase prediction accuracy of future natural product-drug interaction studies. As follow-up to the research, Nguyen plans to conduct studies to determine the mechanism by which goldenseal alters metformin absorption. Based on the data, he said that this appears to happen in the intestine and may be driven by the transporter OCT1. This research could eventually lead to the discovery of other natural product-drug interactions involving goldenseal and drugs transported by OCT1.

Conclusion/ Results indicated that goldenseal altered intestinal permeability, transport, and/or other processes involved in metformin absorption, which may have unfavorable effects on glucose control. Inconsistencies between model predictions and pharmacokinetic outcomes prompt further refinement of current basic models to include differential transporter expression in relevant organs and intestinal degradation/metabolism of the precipitant(s). Such refinement should improve in vitro‐in vivo prediction accuracy, contributing to a standard approach for studying transporter‐mediated natural product‐drug interactions.