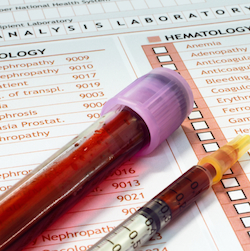 Could a cancer blood test for eight cancers cost the same as a single cancer test? Yes, say researchers from Johns Hopkins. In a widely reported study, researchers from the Sidney Kimmel Comprehensive Cancer Center at Johns Hopkins designed a multi-analyte blood test that can detect the presence of pancreatic cancer as part of a panel of eight common cancers (pancreas, ovary, liver, stomach, esophagus, colorectum, lung and breast), as reported in the online edition of Science.

The CancerSEEK test evaluated more than 1,000 patients with one of eight common cancers. These included 93 patients with stage I to I-III pancreatic cancer who were enrolled in the study and compared with 812 healthy control individuals with no known history of cancer, high-grade dysplasia, autoimmune disease, or chronic kidney disease. Scientists were able to identify 72% of these patients with pancreatic cancer.

The test utilizes combined assays for genetic alterations and protein biomarkers and has the capacity not only to identify the presence of relatively early cancer, but also to localize the organ of origin of these cancers. Genetic mutations drive the growth of cancer cells, and dying cells shed some of this mutated DNA into the blood. These so called liquid biopsies of blood-borne tumor DNA can reveal, for example, whether a patient’s cancer should respond to a specific drug.

But detecting the scant DNA released by early stage tumors is still challenging. In blood samples from 1005 patients with eight types of tumors that had evidently not yet metastasized, the test detected between 33% and 98% of cases, depending on the tumor type (see graph, below). The sensitivity was 69% or higher for ovarian, liver, stomach, pancreatic, and esophageal cancers—all types that are difficult to detect early.

The test rarely found cancer that wasn’t there. Only seven of 812, or less than 1%, of healthy controls tested positive. And the test, called CancerSEEK, narrowed the origin of the cancer to two possible sites in about 80% of patients. The team, which is applying for patents on CancerSEEK, estimates the cost at less than $500 per sample. “That’s a very attractive number,” says molecular pathologist Anirban Maitra of the MD Anderson Cancer Center in Houston, Texas, because it is in the range of other cancer screening tests such as colonoscopy. 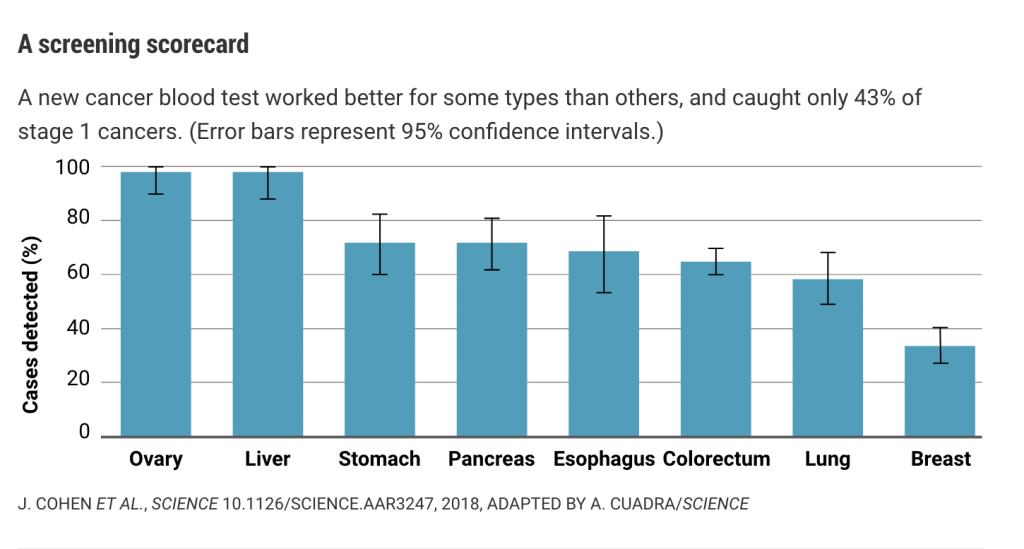 “The potential this has for pancreatic cancer is unprecedented,” says Anne Marie Lennon, M.D., Ph.D.,

Associate Professor of Medicine, Director, Pancreatic Cyst Center of the Ludwig Center at the Johns Hopkins Kimmel Cancer Center.  “We know that in 80-85 percent of pancreatic cancer cases, it’s detected too late, leaving the patient with few options. Developing a blood screening test for pancreatic cancer has been an urgent goal, because catching the disease early will be the way we get to long-term survival.”

The test results for pancreatic cancer were very promising. The sensitivity of the detection method was 70% and the specificity was greater than 99%. Sensitivity and specificity are terms used to evaluate a clinical test. Sensitivity is the ability of a test to correctly identify those with the disease (true positive), whereas test specificity is the ability of the test to correctly identify those without the disease (true negative). New blood tests for cancer must have very high specificity; otherwise, too many healthy individuals will receive positive test results, leading to unnecessary follow-up procedures and anxiety.

STUDY SIGNIFICANCE
This study lays the conceptual and practical foundation for a single, blood screening test for multiple cancers that could be offered as part of routine medical checks. The estimated cost for the test will eventually be less than $500 which is comparable to or lower than other screening tests for single cancers, such as a colonoscopy. To actually establish the clinical utility of CancerSEEK and to demonstrate that it can save lives, prospective studies of all cancer types in a large population will be required, which the Lustgarten Foundation is currently helping to fund.