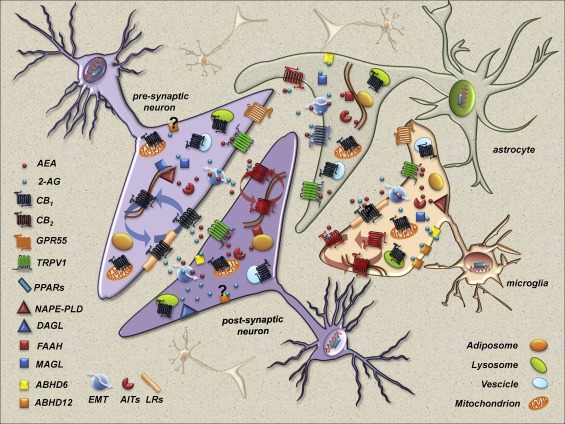 Multiple sclerosis is the most common inflammatory demyelinating disease of the central nervous system, caused by an autoimmune response against myelin that eventually leads to progressive neurodegeneration and disability. Although the knowledge on its underlying neurobiological mechanisms has considerably improved, there is a still unmet need for new treatment options, especially for the progressive forms of the disease.

Both preclinical and clinical data suggest that cannabinoids, derived from the Cannabis sativa plant, may be used to control symptoms such as spasticity and chronic pain, whereas only preclinical data indicate that these compounds and their endogenous counterparts, i.e. the endocannabinoids, may also exert neuroprotective effects and slow down disease progression.

Here, this study, published in  Progress in Neurobiology, reviews the preclinical and clinical studies that could explain the therapeutic action of cannabinoid-based medicines, as well as the medical potential of modulating endocannabinoid signaling in multiple sclerosis, with a link to other neuroinflammatory disorders that share common hallmarks and pathogenetic features. Full text available at the end of this summary.

In this study you will learn:

1. Inside-Out and Outside In Models of MD immunopathogenesis:

“Though the immune-mediated neuroinflammation hypothesis has dominated MS research for over 50 years, recent evidence seems to point to a neurodegenerative and microglia-centered process, according to which MS is primarily a neurodegenerative disease that starts in the brain, and then develops because of inflammation (Kassmann et al., 2007, Lassmann et al., 2012). This has led to the current “inside-out” and “outside-in” models of MS immunopathogenesis, whereby in the first model the immune response that destroys myelin and leads to BBB breakdown is driven by a dysfunction of brain cells, whereas in the second model a dysfunction residing in the periphery leads to BBB damage, myelin disruption and axonal death (Tsunoda and Fujinami, 2002, Stys et al., 2012).”

2.The Role of Cannabinoids and Endogenous Counterparts:

“Since preclinical data show that cannabinoids also exert anti-inflammatory properties and neuroprotective effects (Chiurchiù et al., 2015a), it is hypothesized that these substances may limit progressive neurodegeneration in MS (Pryce et al., 2003, Jackson et al., 2005, Witting et al., 2006). Here, we will review the role of cannabinoids and their endogenous counterparts (i.e., the endocannabinoids, eCBs) in MS, their mode of action and preclinical and clinical significance, as well as how their pharmacological modulation could be useful to treat other neuroinflammatory diseases.”

“In addition to CB1 and CB2, cannabinoids and eCBs can exert their effects engaging other non-CB receptors, including the transient receptor potential vanilloid 1 (TRPV1) channel, expressed mainly in peripheral tissues, including peripheral sensory neurons, epithelial and endothelial cells as well as immune cells (Xia et al., 2011). Other targets are peroxisome proliferator-activated receptors (PPAR) α and γ (Pistis and Melis, 2010) that belong to a family of nuclear receptors whose role is mainly to control lipid metabolism; and orphan G protein-coupled receptor GPR55 (Moriconi et al., 2010).”