SPECIAL REPORT: Why Americans are Pushing for Alternatives to PPIs 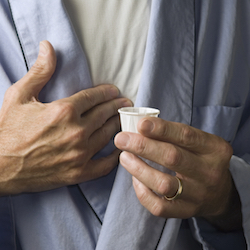 Patients and physicians are getting heartburn on how best to treat digestive health issues. Though the use proton pump inhibitors (PPIs) has dramatically risen in the last decade, opinions are quickly changing on how to best treat

Increasingly, patients and physicians say there must be a better way. New research shows that when a more holistic approach is taken, many patients see better relief of symptoms. This puts integrative-care providers in a unique place to find causal factors and introduce alternative treatments. But doctors warn, the over prescribing and self medicating of PPIs, is a problem that warrants attention.

By sales alone, it would seem that the state of America’s gut health is in dire need of help. For instance, outpatient visits with documented PPI prescriptions increased from 30 million in 2002 to 95 million in 2009.3 However, a significant number of American’s being prescribed PPI’s do not have any indications of gastrointestinal complaints or diagnosis. As many as 62.9% of people taking PPI’s in 2009 had no documented gastrointestinal complaints, gastrointestinal diagnoses or other indicated reason for their use, according to the data.

These numbers do not reflect over the counter sales. Digestive health experts are beginning to take notice and call for action and alternatives.

“It will not surprise me very much to open a journal in the next couple of years and find that PPIs have been linked to global warming,” chided Ronnie Fass, MD, at a Digestive Disease Week meeting in 2011.5 Kidding aside, at the time Fass said, “It is not only patients who are looking for alternatives,” he continued. “I am now hearing from physicians who ask me if there is another approach to therapy. Pressure may be not only coming from patients and physicians, but also from regulators, particularly about the use of escalating doses of PPIs.” Fass is the chief of gastroenterology, Southern Arizona VA Health System, Tucson, and a member of the Gastroenterology & Endoscopy News Medical Advisory Board.

Four in every ten Americans reports digestive health issues, according to data from Neilson and NMI’s most recent report, Opportunities in Digestive Health, 2015.6 As concerns rise about the increasing use of PPI’s, warranted and perhaps unwarranted, integrative care is proving a viable alternative.

Integrative care centers across America report a 59% success rate for gastrointestinal disorder treatments, with food, nutrition and supplements accounting for the bulk of therapy protocols. Chronic pain was only other condition with a higher success rate, according to the report Integrative Medicine in America: How Integrative Medicine is Being Practiced in Clinical Centers Across the United States, Bravewell Collaborative, 2012.7 SEE FIGURE 1. 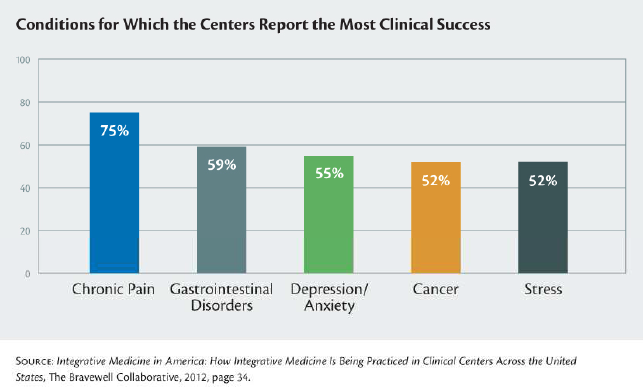 “While previous studies have suggested that patient/provider interactions can affect a wide range of symptoms, most of them compared high-quality conventional visits with those in which the providers intentionally limited their interactions. No previous studies have looked at the effects on GERD-related symptoms, and there is little data comparing conventional visits with those of complementary and integrative providers,” said Michelle Dossett, MD, PhD, MPH, of the Benson-Henry Institute, corresponding author of the paper.

The study included 24 individuals with a history of chronic symptoms at least three times per week for the month preceding the study. Patients were divided into two groups: 1. Conventional visits included questions about patients’ GERD-related history, symptoms, and treatments; 2. Expanded visits, which averaged around 25 minutes longer, featured additional questions about symptom-related sensations, food cravings or aversions, weather-related effects and non-gastrointestinal symptoms. Patients in both groups were also randomized to receive either Acidil, an over-the-counter homeopathic medicine for heartburn and other gastrointestinal symptoms, or a placebo.

In the end, participants in the expanded physician visit had greater improvement in GERD and other gastrointestinal symptoms than did those receiving the conventional visit. Interestingly, the study’s results could not identify which aspects of the expanded visit led to the improvement. Researchers noted that neither the “participants’ beliefs and expectations about treatment nor their perceptions of the physician’s empathy had an effect on their reported symptoms.” Symptom severity could not be attributed to whether participants were taking Acidil, likely because the study was too small to evaluate the drug’s effectiveness.

“The results of this study provide unique preliminary data on the importance of the patient/physician relationship, an ingredient in health care that is often overlooked,” said senior author Gloria Yeh, MD, MPH, of the Beth Israel Deaconess Department of Medicine. Dossett added, “Since all of the visits in this study were performed by a single provider, a next step will be to determine whether other providers trained in the expanded visit model can achieve similar results and whether these results will last long term.

What’s the Trouble with PPIs?

Heartburn and GERD affects about 20 million Americans, with one in every 14 using PPIs, such as omeprazole. 9 To date, adverse study research on PPI’s is limited to population studies rather than probability research through clinical trials. Nonetheless, concerns including heart attack risk, are leading to a shunning of PPIs as a first line treatment for GERD and heartburn.

In Nov. 2014, the FDA agreed to blackbox warnings on packages of both prescription and over the counter PPIs, in response to a 2011 petition and lawsuit by the non-profit group Public Citizen.10 The FDA acknowledged the following drug-interactions and adverse events:

Risk Data on the Rise for PPIs

New research may present FDA with more PPI side-effect data to chew on. The most recent large data-mining study on PPIs showed an increased risk of heart attacks by 16-21 percent, according to research from Stanford School of Medicine.11 “These drugs may not be as safe as we think,” said Nicholas Leeper, MD, the study’s senior author and an assistant professor of vascular surgery and of cardiovascular medicine.

This research supports an earlier 2013 study in Circulation by John Cooke, MD, PhD (then a professor of cardiovascular medicine at Stanford) and his colleagues, which found that PPIs ignite “a cascade of biochemical reactions that led to diminished nitric oxide levels in endothelial tissue.”12 They concluded that PPIs impede the production of nitric oxide in the endothelial cells that line all of the nearly 100,000 miles of blood vessels in an average adult’s body.

While Stanford is calling for more research, the FDA supported warnings, data on overuse and the recent heart concerns speaks for itself. American’s overuse of PPIs, whether prescribed or purchased over-the-counter, is a problem that warrants a solution. A blog column written by board certified surgeon under the pen name, Skeptical Scalpel, summed it up in Physician’s Weekly:13

“I can’t count the number of outpatients I see who say they are on PPIs for GERD or ‘gastritis’ but have never had a proper workup to establish those diagnoses. I have no idea how to stop the wholesale use of PPIs by primary care MDs, gastroenterologists and people who self-medicate. Sadly, Skeptical Scalpel concluded, “It may be hopeless.”

Integrative care physicians are perfectly aligned to give hope to both the Skeptical Scalpel and patients looking for immediate alternatives to PPIs.