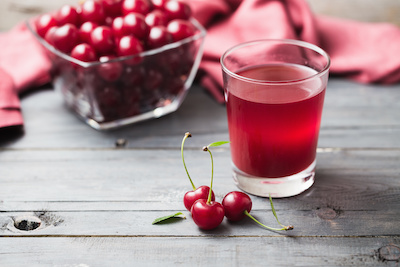 Montmorency tart cherry juice, made from the most abundant cherries in the United States, has long been coveted by gout 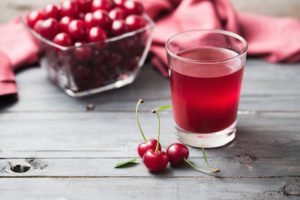 sufferers, athletes for exercise recovery, and those seeking a good night’s sleep. Now there’s evidence that this polyphenol-rich beverage may help improve cognitive performance in older adults and reduce insulin resistance. Each study concludes that tart cherry juice’s ability to reduce blood pressure plays a role in both health issues.

In a study published in the journal Food & Function, researchers at the University of Delaware found daily intake of Montmorency tart cherry juice improved memory scores among adults, ages 65 to 73 years. In this randomized-controlled trial, 34 participants were assigned to consume either 16 ounces (480 mL) of Montmorency tart cherry juice or the same amount of a placebo drink, half in the morning and half in the evening, every day for 12 weeks.

All participants were generally healthy (not heavy smokers, no prior diagnosis of heart disease, diabetes, cancer, psychiatric disorders, etc.), were not taking any medications that could affect brain function and were asked to maintain their regular diet and physical activity levels for the duration of the study. Before and after the 12-week trial, researchers analyzed cognitive function and subjective memory scores via a series of questionnaires and tests.

“Cognitive function is a key determinant of independence and quality of life among older adults,” said lead author Sheau Ching Chai, assistant professor of behavioral health and nutrition at the University of Delaware. “The potential beneficial effects of tart cherries may be related to the bioactive compounds they possess, which include polyphenols, anthocyanins and melanin. They may also be related to tart cherry’s potential blood-pressure lowering effects, outlined in a previous study we conducted in the same population, as blood pressure can influence blood flow to the brain.”

Compliance rate throughout the 12-week trial was high (94.2%), suggesting tart cherry juice twice a day was a manageable addition to these participants’ daily routine.

Conclusion/ Daily tart cherry juice consumption may improve cognitive abilities. This may be through anti-oxidative and anti-inflammatory properties of tart cherry and its ability to lower BP. Further research is needed to confirm these findings.

In a second study, researchers looked at the effects of tart cherry juice for metabolic syndrome (MetS). The study, published in the Journal of Functional Foods, compared acute supplementation of Montmorency tart cherries in capsule (MTCC) and juice (MTCJ) forms in MetS humans, as potential prophylactic interventions against cardio-metabolic diseases.

In an acute, single-blind, placebo-controlled, randomised, crossover trial, eleven participants with MetS (49 ± 12 years; 6M/5F), consumed one bolus of MTCC, MTCJ or placebo (PLA) on different occasions. Blood-based and functional cardio-metabolic biomarkers were measured pre-bolus and up to 5-hour post-bolus.