Myocardial Injury in Patients With COVID-19 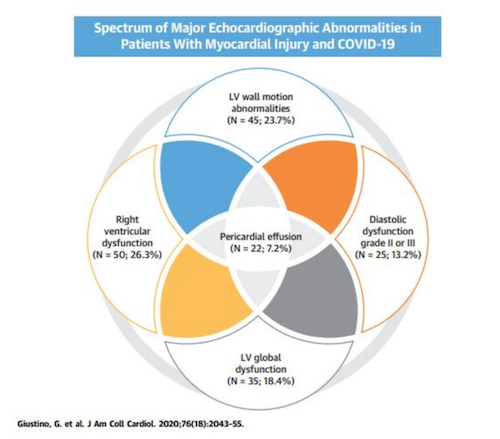 A new study by researchers at Icahn School of Medicine at Mount Sinai identifies different types of cardiac structural damage experienced by COVID-19 patients after myocardial injury that are associated with deadly conditions including heart attack, pulmonary embolism, heart failure, and myocarditis. These myocardial abnormalities are associated with higher risk of death among hospitalized patients.

The findings, published in the Journal of the American College of Cardiology, offer new insights that may help doctors better understand the mechanism of cardiac injury, leading to quicker identification of patients at risk and guidance on future therapies.

The international, retrospective study expands on Mount Sinai’s previous research showing that myocardial injury (heart damage) is prevalent among patients hospitalized with COVID-19 and is associated with higher risk of mortality. That study focused on the patients’ levels of troponin–proteins that are released when the heart muscle becomes damaged–and their outcomes (higher troponin levels mean greater heart damage).

“This is one of the first studies to provide detailed echocardiographic and electrocardiographic data in hospitalized patients with COVID-19 and laboratory evidence of myocardial injury,” explains first and corresponding author Gennaro Giustino, MD, Cardiology Fellow at The Mount Sinai Hospital. “We found that among COVID-19 patients who underwent transthoracic echocardiography, these cardiac structural abnormalities were diverse and present in nearly two-thirds of patients.”

Scope and Diversity of Myocardial Injury

The study went on to look at in-hospital mortality and troponin elevation. It shows that troponin elevation was 5.2 percent among patients who did not have heart injury, compared to 18.6 percent for patients with myocardial injury but without echocardiographic abnormalities, and 31.7 percent for patients with myocardial injury who also had echocardiographic abnormalities. Researchers adjusted for other major complications from COVID-19 including shock, acute respiratory distress syndrome, and renal failure.

“Our study shows that an echocardiogram performed with appropriate personal protection considerations is a useful and important tool in early identification of patients at greater risk for COVID-19-related cardiac injury, who may benefit from a more aggressive therapeutic approach earlier in their hospitalization,” says corresponding author Martin Goldman, MD, Arthur M. and Hilda A. Master Professor of Medicine (Cardiology) at the Icahn School of Medicine at Mount Sinai.

“Additionally, because this is a new disease with lingering symptoms, we plan on following these patients closely using imaging to evaluate the evolution and hopefully resolution of these cardiac issues.”

“Echocardiograms have shown to be invaluable in providing critical information on patients who present with multiple cardiac complaints. Echocardiography is the only imaging modality that can be taken to the bedside and safely used for patients including those on ventilators,” says Lori Croft, MD, Associate Professor of Medicine (Cardiology) at the Icahn School of Medicine at Mount Sinai and Director of the Echocardiography Laboratory at The Mount Sinai Hospital. “Our findings will help guide care of Covid-19 patients during a critical time.”