Naked Mole Rat, “You are My Detox Hero,” by Kara Fitzgerald, ND 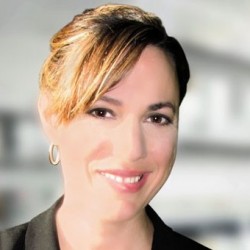 By Kara Fitzgerald, ND / There’s no disputing hairless mole rats are homely at best, hideous at worst. They’re wrinkled, beady-eyed, hairless (except for whiskers), subterranean rodents with massive protruding front teeth. When German naturalist, Eduard Ruppell, spotted one in Africa in 1842 he mistakenly described it as diseased. Poor little NMR. 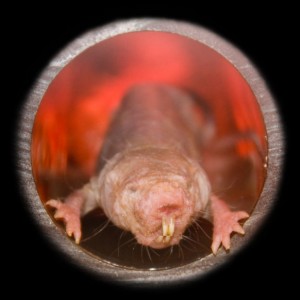 But NMRs don’t need your pity. Learn a little more about these guys, and their beauty emerges: they tolerate oxygen deprivation better than Houdini. They live forever, feel no pain, and they don’t get cancer.

They live healthily well into their rodent-year 90s, still reproducing, and participating in NMR society. They maintain muscle mass, fat mass, bone density, cardiac health and neuron numbers (watch out American Academy of Anti-aging Medicine). Rumor has it that by the time they’re 90, naked mole rats have read all the classics, speak six rodent languages and have mastered at least three instruments, including the French horn.

Some advice: Don’t get into a hot pepper eating contest with a Naked Mole Rat. They feel no pain – seriously. While naked mole rats have the nerve fibers that transmit pain, they make none of the pain neuropeptide Substance P. This ensures that they don’t experience the burn of acid like we do, enabling them to live comfortably in a low oxygen, high CO2 environment. (C02 is acidic – think of the feeling of soda bubbles on your lip or in your nose.) They also don’t mind capsaicin – the hot stuff in peppers — even directly injected into their hairless little foot.

But what makes NMRs so super-cool? They don’t get cancer. In fact, you can spike an NMR with all the cancer cells and cancer-inducing toxins that you can think of, and NO RESPONSE. You can nail them with ray beam after ray beam of ionizing radiation, and NO response. It doesn’t even seem to induce DNA damage. And, they rapidly render toxic metals harmless. Far more is required to kill an NMR cell than a mouse cell.

Really? Vast swaths of NMR DNA are devoted to DETOXIFICATION and DNA REPAIR genes. These cute little buggers protect their DNA which then in turn produce lots of detox proteins, which protect them from toxin exposures. This is probably why they sail through life into their 90s, all happy and healthy. They break down bad cells (autophagy) and problem proteins (using the ubiquitin proteasome system) rapidly. 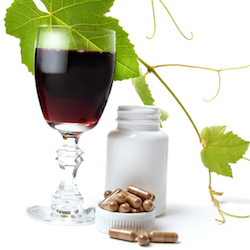 A few more plot twists: NMRs tolerate a ton of oxidative stress for a long time (20+ years) without impairment. That’s right – no aging, no disease (so long free radical theory of aging). They also have SHORT telomeres and low telomerase activity, which flies in the face of our understanding that LONG telomeres and high telomerase activity are associated with longevity. To those of you gulping down your resveratrol-laced red wine hoping for the fountain of youth through robust telomere preservation: maybe the more primary effect is on glutathione activity?

And finally, the subterranean NMRs are naturally very vitamin D deficient.* What can we learn from these ungainly subterranean masters of the universe? As we speak, pharma is embracing the NMR, attempting to coax out their secrets in hopes of new blockbusters for pain, longevity, and anticancer therapy.

Perhaps DETOXIFICATION is THE fundamental issue in wellness.

But how do we integrative clinicians think about using the wisdom of NMR physiology? Well, off the top of my head, I’d say we should continue our focus on detoxification, detoxification, and detoxification, as a fundamental issue to wellness. Even if it is an area still deemed emerging. I’ll take the risk.

Where is my glass of red wine? I’m heading underground.

*NOTE FROM THE AUTHOR: “I very liberally borrowed from the much better, reference article on naked mole rats, entitled Underground Supermodels, by Dr. Thomas Park in the June, 2012, issue of Scientist Magazine. In fact, I have been carrying that issue around in my roller bag since June intending to author this blog. I can finally take it out.” Gen Comp Endocrinol. 1993 Jun;90(3):338-45.