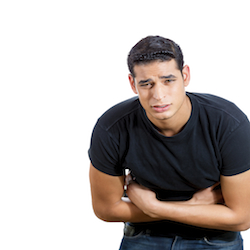 A simple blood test for food intolerances could go a long way in relieving patients of uncomfortable and potentially dangerous gastro-esophageal reflux disease (GERD) symptoms. This study presents a unique and non-invasive testing method to identify food intolerances, which could reduce symptoms by as much as 50%, without the use of proton pump inhibitors. Research By Michele Caselli, Giovanni Zuliani, Francesca Cassol, Nadia Fusetti, Elena Zeni, Natalina Lo Cascio, Cecilia Soavi and Sergio Gullini, Published in World Journal of Gastroenterology, Dec.2014. 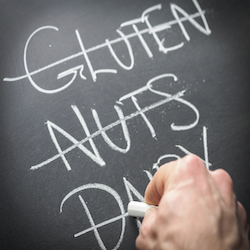 presents itself as a chronic relapsing disease course. The etiopathogenesis of GERD remains largely unknown even though up to 20% of the adult population in Western Countries is affected by reflux symptoms on a weekly basis. Notably, at least 50% of GERD patients remain on continuous medical therapy, which may predispose individuals to an increased risk of cancer.

This study suggests a simple leukocytotoxic test, based on the optical evaluation of leukocytes in a blood sample that has come into direct contact with specific food substances, may provide a diagnostic tool for treatment. This pilot study reveals that undiagnosed food intolerances, identified by this test, may help significantly reduce the incidence of GERD.

The patients in this study included only non-responders to PPI therapy or partially responders (i.e., patients experiencing only slight reduction of symptoms after 4 wk of treatment or having an initial response to PPI treatment but with relapses of symptoms during the 4 wk of PPI treatment) were recruited.

1. Fasting blood samples were taken from each of the 38 patients.

2. Leukocytotoxic test was performed by incubating the blood with a panel of 60 food items to be tested.

3. A “true” diet excluding food items inducing moderate-severe reactions, and a “control” diet including them was developed for each patient.

4. Then, twenty patients received the “true” diet and 18 the “control” diet; after one month (T1) symptoms severity was scored by the GERD impact scale (GIS).

5. Hence, patients in the “control” group were switched to the “true” diet, and symptom severity was re-assessed after three months (T2). 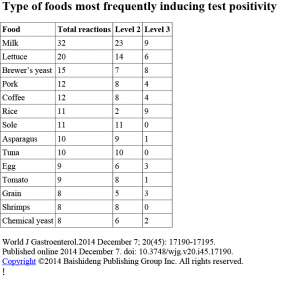 The leukocytotoxic test is based on the optical evaluation of leukocytes in a blood sample that has come into direct contact with specific food substances. On the basis of leukocytes observation, degrees of reaction to the food extracts are rated according to the following scale: level 0 = negative, level 1 = slightly positive, level 2 = moderately positive, and level 3 = highly positive. These levels correspond to (1) the state of the leukocytes, which react by swelling, then developing vacuoles, and finally deteriorate; and (2) the total number of leukocytes that react.

Currently, the dedicated task forces consider these tests to have a poor clinical specificity and sensitivity. The researchers hypothesized that the most important reason might be the very high frequency of mild positive results. Therefore, the researchers decided to exclude level 1 of the scale, directly starting from level 2. In this way, they could demonstrate a strong difference between GERD patients and controls, and the test-based exclusion diet resulted effective in all patients.

1. This preliminary data seem to suggest that pathogenetic mechanisms related to food intolerance may play a role in the etiopathogenesis of GERD. The modifications of the GIS score from T0 to T2 in the two groups of patients clearly shows that the entity of reduction in the “true” diet group at T1 is equal to the reduction observed for the “control” group at T2. This observation seems to confirm the effectiveness of “true” test-based diet in reducing the impact of GERD symptoms of about 4%-50%.

Conclusion /  The results suggest that, although not all GERD symptoms might be attributed to food intolerance, this pathogenetic condition may play a role in GERD symptoms development. Thus, test-based exclusion diets may be considered an effective and cost-effective therapeutic tool, poor of adverse events, and particularly indicated when PPI treatment is not effective or not indicated. When considering only the moderate-severe reactions, the leukocytotoxic test appears to be effective in identifying the food substances whose exclusion is associated with clinical improvement of GERD symptoms.