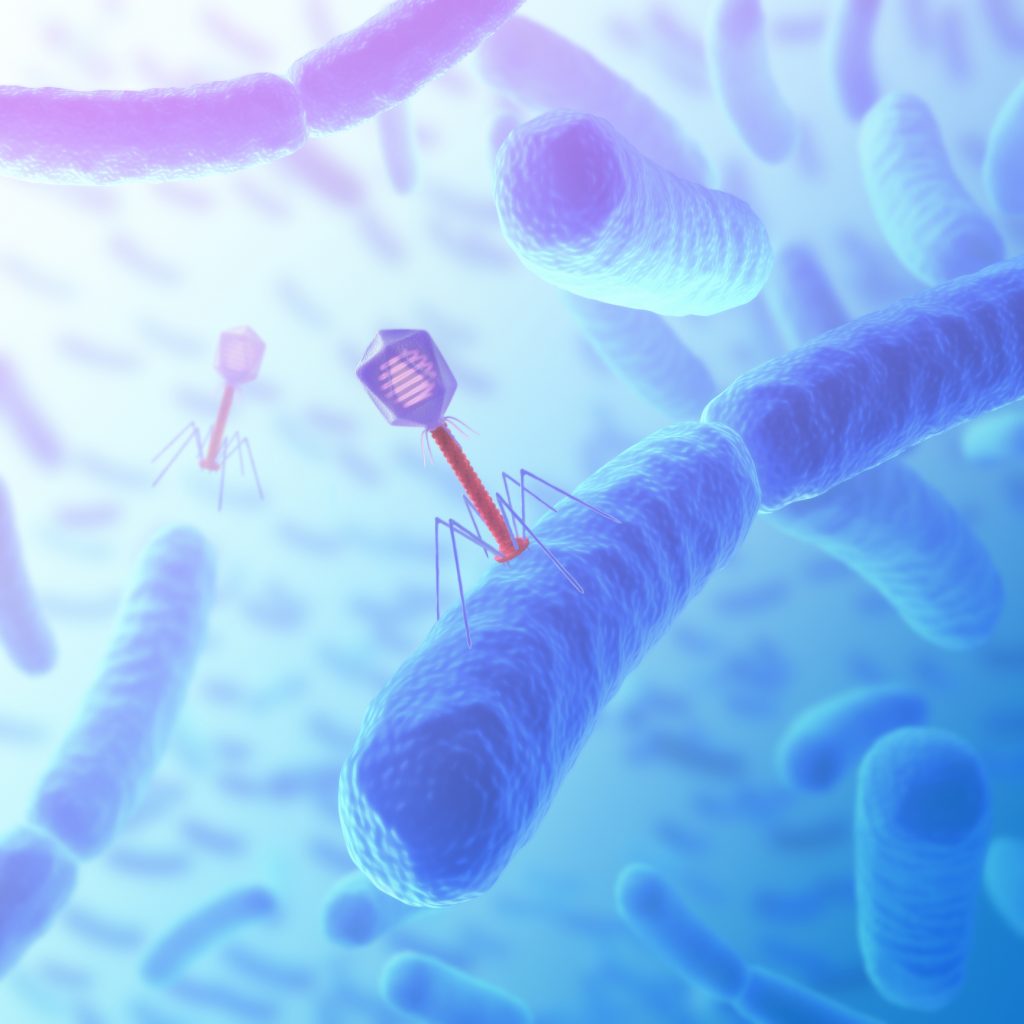 At last week’s Nutrition 2018 conference in Boston, scientists from the Department of Nutrition and Food Studies at George Mason University in Fairfax, VA released an exciting new study showing the  therapeutic potential of bacteriophages.

It’s ironic that bacteriophages were used up until the 1930’s, prior to the advent of commercial antibiotics. Now that the gut microbiome is at the forefront of health and antibiotic resistance is such a problem, bacteriophages may prove a worthy replacement.

They are remarkable because unlike antibiotics that kill all bacteria indiscriminately, often leaving the gut in a state of disrepair, bacteriophage are viruses that only attack the harmful bacteria not the human cells. And better yet, they don’t negatively impact the microbiome and may even improve gut health.

The new clinical study confirmed the safety and tolerability of using these bacteria-specific viruses to eliminate disease-causing bacteria in the gut. The new treatment could be used in place of antibiotics to rid the gut of harmful bacteria and promote the growth of beneficial bacteria that are known to enhance gastrointestinal health, immune function and anti-inflammatory processes.

“People taking antibiotics can develop resistance and experience gastrointestinal distress since antibiotics kill both bad and good bacteria in the gut,” said study co-investigator, Taylor C. Wallace, Ph.D., principal and CEO of the Think Healthy Group Inc. and an adjunct professor in the Department of Nutrition and Food Studies at George Mason University.

Using viruses that infect only specific types of bacteria spares the many good bacteria in the gut, which are linked to numerous long-term beneficial health outcomes. We have shown for the first time that bacteriophage treatment has no apparent side effects, at least with short-term use,” said Wallace.

Bacteriophages can be used to selectively combat specific microorganisms in people without causing any type of infection or disrupting the body’s microbiome as a whole. In addition to treating bacteria-related gastrointestinal illnesses, Wallace and study co-investigator Tiffany Weir, Ph.D., of Colorado State University are interested in using bacteriophages as dietary supplements to help restore balance to the bacteria that live in the gut of people with metabolic syndrome, which is known to shift gut bacteria to a more pathogenic and inflammatory state.

The PHAGE study included 31 people who reported significant gastrointestinal distress at the beginning of the study, but who were not diagnosed with any specific gastrointestinal disorder. Study participants were assigned to either a placebo or treatment group for the first four weeks of the study, followed by a two-week washout period and an additional four weeks on the opposite treatment. The treatment group received four bacteriophage strains that specifically eliminate E. coli, a pathogen that can contribute to gastrointestinal irregularities and stomach upset.

The researchers report that study participants tolerated the bacteriophage treatment extremely well, with no adverse events reported during the four weeks of treatment.

The researchers say that bacteriophages might also be useful for eliminating nutritional deficiencies due to chronic diarrhea in developing countries and are seeking larger-scale support to test which strains might be best for this application. Chronic diarrhea and associated malnutrition are the second most common causes of childhood death worldwide.

Conclusion / The treatment was well tolerated with no adverse events or differences in metabolic safety markers detected.  Bacteriophage treatment resulted in significant decreases in IL-4, often associated with allergic response, but no other inflammatory markers.  There was also a trend towards decreased total and LDL cholesterol with bacteriophage consumption; however, this significance would need to be determined in a larger more clinically relevant population.

There were no major perturbations to the microbiota as indicated by alpha and beta diversity measures, suggesting that bacteriophage consumption is selective and does not globally disrupt the microbiota.  Changes in differential abundance of several key bacterial species, including reductions OTU’s most closely mapping to the pathogen Clostridium perfringens, were observed.

Source: Taylor C. Wallace presented this research during the Medical Nutrition: Interventions for the Treatment and Prevention of Nutrition-Related Diseases Session at Nutrition 2018 conference, hosted by the American Society of Nutrition (abstract).