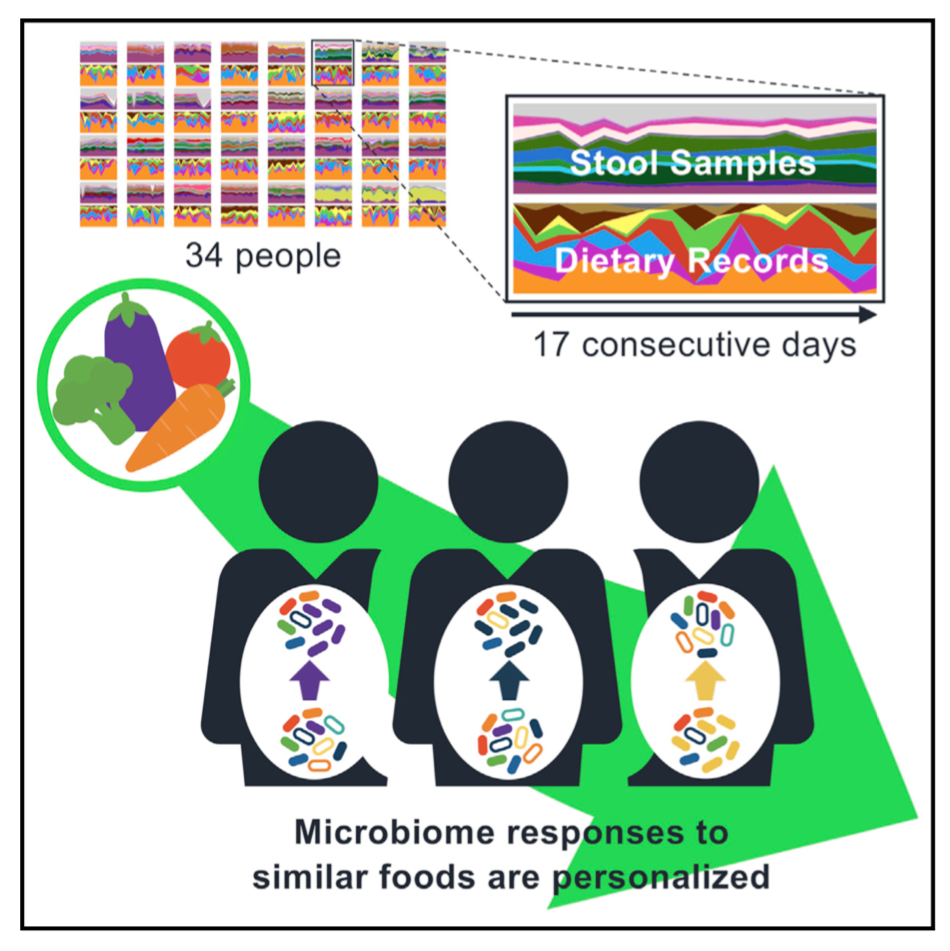 Foods that look the same on nutrition labels can have vastly different effects on our microbiomes, report researchers in a paper published in the journal Cell Host & Microbe. The researchers’ observations of participants’ diets and stool samples over the course of 17 days suggested that the correlation between what we eat and what’s happening with our gut microbes might not be as straightforward as we thought. This adds an increased level of complexity to research focused on improving health by manipulating the microbiome.

“Nutrition labels are human-centric,” says senior author Dan Knights (@KnightsDan), of the Department of Computer Science and Engineering and the BioTechnology Institute at the University of Minnesota. “They don’t provide much information about how the microbiome is going to change from day to day or person to person.”

The study was designed to identify the relationship between habitual dietary intake and daily microbiome variation using dense, longitudinal diet-microbiome data. In the study, the investigators enrolled 34 participants to record everything they ate for 17 days. Stool samples were collected daily, and shotgun metagenomic sequencing was performed. This allowed the researchers to see at very high resolution how different people’s microbiomes, as well as the enzymes and metabolic functions that they influence, were changing from day to day in response to what they ate. It provided a resource for analyzing the relationships between dietary changes and how the microbiome changes over time.

“We expected that by doing this dense sampling–where you could see what people were eating every single day and what’s happening to their microbiome–we would be able to correlate dietary nutrients with specific strains of microbes, as well as account for the differences in microbiomes between people,” Knights says. “But what we found were not the strong associations we expected. We had to scratch our heads and come up with a new approach for measuring and comparing the different foods.”

What the researchers observed was a much closer correspondence between changes in the diet and the microbiome when they considered how foods were related to each other rather than only their nutritional content. For example, two different types of leafy greens like spinach and kale may have a similar influence on the microbiome, whereas another type of vegetable like carrots or tomatoes may have a very different impact, even if the conventional nutrient profiles are similar.

Two people in the study consumed nothing but Soylent, a meal replacement drink that is popular with people who work in technology. Although it was a very small sample, data from these participants showed variation in the microbiome from day to day, suggesting that a monotonous diet doesn’t necessarily lead to a stable microbiome.

As can be seen below in the representative dietary intake of subject 10 below, dietary intake in most subjects varied by day. For example, subject 10 reported consumption of eggs on weekend days. Weekend diets were more variable (less stable) than weekday diets.Analysis of the shake drinkers’ data further supports the hypothesis that dietary monotony alone is not sufficient to stabilize the microbiome. The two shake drinkers were outliers in dietary stability (i.e., high stability, eating the same foods consistently from day to day; see below), but they had microbiome stability profiles that were not outliers when compared with other subjects. Researchers found that the day-to-day changes in microbiome composition of these subjects appeared similar to those of other subjects.

Here are the general findings:

“The microbiome has been linked to a broad range of human conditions, including metabolic disorders, autoimmune diseases, and infections, so there is strong motivation to manipulate the microbiome with diet as a way to influence health,” Knights concludes. “This study suggests that it’s more complicated than just looking at dietary components like fiber and sugar. Much more research is needed before we can understand how the full range of nutrients in food affects how the microbiome responds to what we eat.”

Conclusion/ “Overall, the study contributes to furthering our under- standing of personalized diet-microbiome interrelationships. While conventional nutrient-based analysis of diet alone is inadequate for studying diet-microbiome interaction, we show that statistical information can be shared across related foods to overcome the lack of overlap between the foods eaten by different people. This approach, in combination with longitudinal sampling and multi-day dietary records, revealed personalized diet-microbiome interactions and may be useful in future population-wide studies that aim to determine the exact role of dietary foods in shaping the gut microbiome.”

Information was excerpted and edited from copy provided by Eureka Alert and Cell Host & Microbe.