How Does Eating Organically Grown Food Affect The Gut-Microbiome? 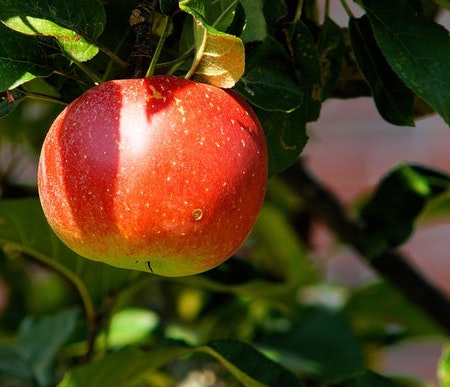 As medical professionals, you well understand the importance of the gut 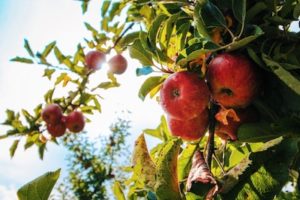 microbiome. This study bring a new discussion into the mix – the plant-gut microbiome axis. The connection and the exchange between microbiomes within raw-eaten plants could be of special importance for reducing allergies and food-borne illness exposure, as well as being an important source of microbes.

“The plant-gut microbiome axis could be of special importance for human health, and raw-eaten plants seem an important source for microbes. Recently it was shown that plant-associated microbiota including bacteria, fungi and viruses transiently colonized the gut thus, forming our transient microbiome.”

Study Goals/ The objective of this study are basic insights into the apple fruit microbiome. In detail, the researchers aimed to identify the differences between tissues of apple fruits and the impact of organic and conventional management practices – which represent diverse defined abiotic treatments pre- and post-harvest – on abundance and composition of apple fruit-associated bacteria.

The researchers “hypothesized that each apple provides different niches 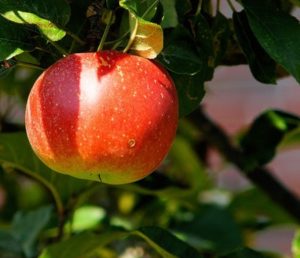 for bacterial communities and that the management practice has substantial impact on the apple microbiome, which is crucial for plant (post-harvest) and human health issues.” Apples, from the cultivar Arlet  were chosen both from organically and conventionally managed apple orchards in Styria, Austria. Scientists extracted the microorganisms from the stem end, peel, fruit pulp and calyx (star-shaped end). 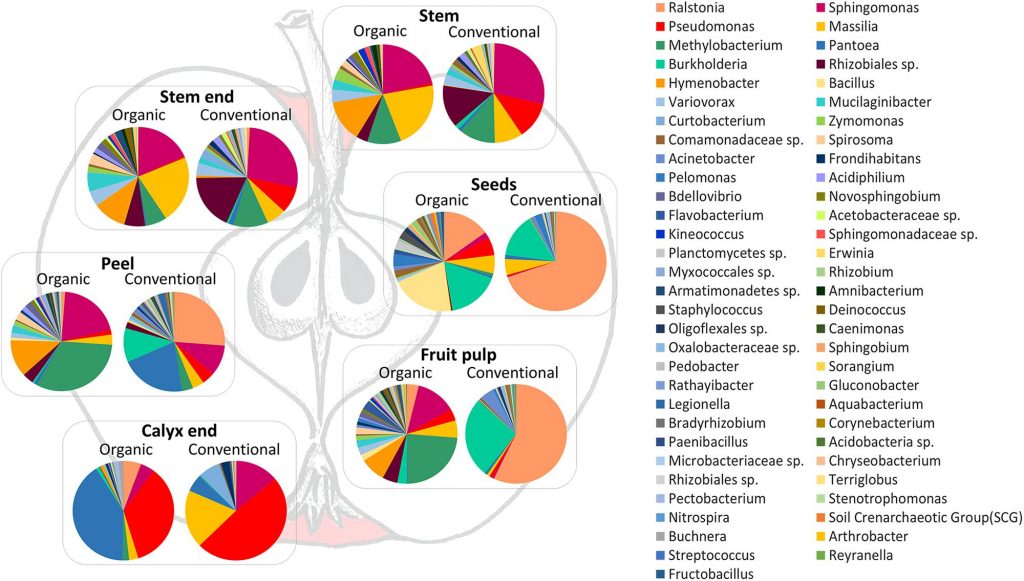 This study found a number of factors that have both food safety and allergy implications for human consumption. For instance the researchers noted that Escherichia-Shigella were found in the tissues of conventional apples (although low abundance), but not in organically managed apples. Escherichia-Shigella evolves from Escherichia coli and is the etiologic agent of bacillary dysentery and diarrhea.

The conventional apples contained Ralstonia and Erwinia, which can lead to plant disease and leaf wilt, but has also been recently studied for their pathogenic potential in mammalian cells.

The study results found a surprisingly greater abundance of a particularly useful probiotic. The core taxa of organic apples is the type of beneficial bacteria that leads to Lactobacillus, frequently used in probiotics and probiotic foods.

The researchers also found specific microbial signatures that could reduce the incidence of food allergies. For instance, Methylobacterium, which is known to enhance the biosynthesis of strawberry flavor compounds, was significantly higher abundant in the organic apple peels and fruit pulp samples.

Above all, they surmise that the “highly diverse microbiome of organically managed apples might limit or hamper the abundance of human pathogens, simply by out competing them.”

Conclusion/ “Investigating the apple fruit microbiota resulted in profound differences between the tissues, applicable for microbiota diversity, composition and abundance. A significant management effect on the microbiota was furthermore apparent for all tissues, even for seeds. Organic and conventional apples are occupied by a similar quantity of microbiota; consuming the whole apple includes an approximate uptake of 100 million bacterial gene copy numbers.”

“However, freshly harvested, organically managed apples harbor a significantly more diverse, more even and distinct microbiota, compared to conventional ones; the abundance of almost 40% of bacterial genera and orders differed significantly between organically and conventionally managed apples. Moreover, organic apples conceivably feature favorable health effects for the consumer, the host plant and the environment in contrast to conventional apples, which were found to harbor potential food-borne pathogens.”