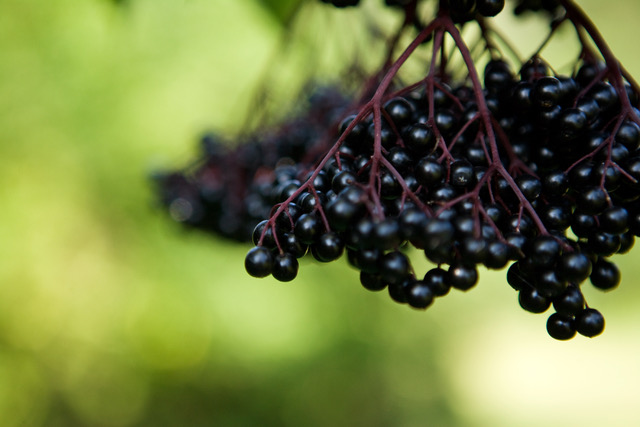 By Jessie Hawkins, PhD/ Elderberries–dark purple berries from the Sambucus nigra plant–have become a universal natural remedy for respiratory complaints such as the common cold and seasonal influenza (Roxas, 2007; Blumenthal, 2003). Native to northern Europe, the elderberry has a centuries-long history of medicinal use. Since the onset of the COVID-19 pandemic, this in-demand supplement has practically dominated the supplement spotlight as consumers hope it may offer some protection from the novel respiratory virus.

The increased emphasis on elderberry as a respiratory supportive supplement has been accompanied by an onslaught of misinformation and clickbait. Misinformation is harmful to public health whether it features grandiose claims the berry can cure COVID-19 or attention-grabbing headlines attacking the berry by carefully omitting substantial portions of the scientific literature. Both overplaying the benefits of the botanical and falsely downplaying the benefits of the botanical leave the public without factual information.

As a result, patients and practitioners alike are left with the frustrating task of sifting through the chaos to find what the totality of science really says about this much-loved nutraceutical. The purpose of this article is to simplify that task by summarizing the entirety of the science–from bench to bedside–allowing readers to draw evidence-based conclusions about this supplement.

These dark fruits have extensive substantiation in the lab, where researchers have shown that elderberries exhibit antiviral activity against routine winter viruses (Porter, 2017; Knudsen, 2013; Vlachojannis, 2010). This includes rhinovirus, the virus most often associated with the common cold, as well as many strains of the influenza virus responsible for the seasonal flu (Kinoshita, 2012; Roschek, 2009; Zakay-Rones, 1995). Anthocyanins, specifically cyanidin 3-glucoside and cyanidin 3- sambubioside, may be responsible for these antiviral effects and may even play a protective role against resistant strains of influenza (Kannan, 2018).

In addition to the antiviral activity demonstrated in laboratory research, anthocyanins from elderberries are known to support immune health (Knoo, 2017). These agents also play a role in inhibiting a virus’ ability to penetrate and replicate within human cells by blocking the viral surface proteins required for attachment and entry (Golnoosh, 2019). Oral ingestion of elderberry extracts is sufficient to achieve these effects, as studies have confirmed that oral ingestion of the supplement is associated with increased levels of anthocyanins in blood plasma (Han, 2021; Cao, 1999).

Clinical Trials on Elderberry as a Supplement

As the research transitions from petri dishes to a clinical environment, elderberry substantiation remains strong. The scientific literature contains a respectable amount of clinical evidence confirming its benefit for both the common cold and seasonal influenza. Randomized controlled trials have confirmed that the supplement successfully reduces incidence of respiratory viruses as well as the total duration and severity of upper respiratory infections.

Five randomized controlled trials (RCTs), spanning three continents, have tested these actions in varying populations. The earliest published elderberry supplementation RCT is Zakay-Rones (1995). This manuscript describes two research studies: in-vitro analysis of the berry’s ability to inhibit the virus and an RCT of the berry’s ability to reduce symptoms of influenza B. This trial was small (n=27) but produced a substantial effect size (d=1.36). This was followed by a larger trial by the same researchers published in 2004 (Zakay-Rones, 2004). The follow-up trial evaluates the effects of elderberry in a sample of patients with flu types A and B.

The largest effect size identified (d=2.78) in the literature was found in a 2009 RCT conducted by Kong et al. In this trial 28% of participants in the treatment group reported complete recovery from upper respiratory symptoms only 48 hours after the onset of elderberry supplementation.

Elderberry is effective as a preventive as well. In a 2016 trial, elderberry supplementation was evaluated as a supplement for international air travelers. Tiralongo et al found that it reduces incidence of upper respiratory illnesses among travelers and significantly shortens the duration and severity of symptoms (2016).

To quantitatively summarize the effects of elderberry and evaluate for potential moderators to these effects, an independent meta-analysis of RCTs on elderberry was conducted in late 2018. This analysis found that “elderberry supplementation at the onset of upper respiratory symptoms substantially reduces overall symptom duration as compared to a control group.”

The effect size identified in the meta analysis far exceeded Cohen’s “large” classification for the outcome of influenza (Hawkins, 2019; Sullivan, 2012). Over 98% of those who took elderberry experienced faster recovery and on average, those taking elderberry recovered from the flu over twice as fast as the average person. The effect size for the common cold was slightly smaller but still well within the range of a “large” statistical effect size. This meta-analysis also evaluated the potential that flu vaccination status may impact the effects of elderberry, making it stronger or less effective. The supplement was found to produce similar effects among both populations.

Elderberry’s impressive outcomes have inspired some clinicians to investigate the potential for the development of a pharmaceutical which utilizes its benefits. Through an FDA investigational new drug (IND) application, researchers at the Cleveland Clinic evaluated the potential for elderberry to treat patients with serious cases of influenza (Macknin, 2020). Unlike previous trials, which utilized elderberry as a preventive or early treatment for routine respiratory viruses, this trial focused on severely ill patients in the emergency room who were days into the course of illness.

The difference in timing of administration and severity of disease among the trial’s population were not the only hurdles this trial faced. Despite changing its inclusion criteria midway, the trial was unable to recruit enough patients for the analyses performed. This sample in the final analysis was underpowered which, unsurprisingly, resulted in no statistically significant associations between the use of elderberry and improved outcomes among these seriously ill patients. The purpose of power in a clinical trial is to reduce the risk of false negatives (type 2 errors), so an underpowered trial that fails to find statistical significance may result in more questions than answers (Fogel, 2018; Halpern, 2002).

The departure from administration norms, combined with the lack of statistical power make it difficult to scientifically draw firm conclusions related to this study’s findings. Without conducting additional trials that are sufficiently powered for the identified statistical analysis, it is not clear whether the lack of significance in this trial occurred because elderberry is unable to function as a drug product among seriously ill patients or simply because the trial was too small to detect the effect of elderberry with the selected methodology and statistical analysis. It is possible that elderberry is only effective at the onset of a respiratory infection; it is also possible that the supplement has drug potential that this trial simply failed to identify. To answer this question, more research is needed.

Totality of the Literature

Despite the unanswered questions about elderberry’s drug potential, the scientific literature is overwhelmingly in support of elderberry’s ability to reduce the incidence of routine upper respiratory infections when used as a preventive tool and to reduce the severity and duration of these infections, when administered at the onset of symptoms. The question of whether or not the popular dietary supplement is effective at treating the flu when administered days into an illness and/or when administered to severely ill patients has yet to be answered through sufficiently powered studies.

Additionally, despite an onslaught of claims to the contrary, studies have yet to be conducted on the potential for elderberry supplementation to play a role in the prevention or treatment of the SARS-CoV-2 virus. Until such research is conducted and replicated, claims that the berry has benefits related to the pandemic are highly speculative. However, given the endemic potential of the virus, research evaluating tools, such as elderberry, that may protect against infections, is an urgent research priority for global and public health (Phillips, 2021).

When it comes to routine seasonal viruses, however, the strength of evidence is strong and warrants progression into the next phase of clinical research. The advancement of elderberry research beyond simple efficacy studies (i.e. “does it work?”) is long overdue. The science has answered the question of efficacy and trials have confirmed and replicated these effects.

Confirming efficacy, however, does not mean that no gaps in knowledge remain. Larger, more targeted RCTs should begin answering questions related to moderating effects, optimal dose and delivery forms for both prevention and treatment, variations in effects between men and women, effectiveness (i.e. in real-world settings), identification of rare side effects, pediatric applications, and much more.

When it comes to the use of elderberry as a dietary supplement, there is still much to learn. Given the widespread intake of the supplement, answers to these advanced questions are urgently needed. As with any drug or supplement, gaps in knowledge will never be non-existent and each high quality trial identifies multiple areas to study further. Despite the limitless potential for further inquiry, one thing is certain from the existing body of knowledge: elderberry remains one of our most effective and most studied botanical supplements for the common cold and seasonal influenza. And that knowledge has the potential to change countless lives for the better.

Jessie Hawkins, PhD, brings over 20 years of experience in the integrative health field to her role as Executive Director of the Franklin Health Research & Education Center and its associated 501(c)(3) nonprofit research organization. She established FHR in 2005 as an independent educational center and has overseen its growth and transition to an academically focused contract research organization for the natural products and medical devices industries. Dr. Hawkins holds a Bachelor’s Degree in Environmental Health, a Master’s Degree in Health Promotion, and a PhD in Health Research, and has received post-graduate education from London School of Hygiene and Tropical Medicine (epidemiology) and Harvard Medical School (clinical research). She is widely published in the integrative health field, and during non-pandemic times frequently travels to present FHR’s research findings at professional conferences worldwide.

Fogel, D. B. (2018). Factors associated with clinical trials that fail and opportunities for improving the likelihood of success: a review. Contemporary clinical trials communications, 11, 156-164.

Zakay-Rones, Z., Thom, E., Wollan, T., & Wadstein, J. (2004). Randomized study of the efficacy and safety of oral elderberry extract in the treatment of influenza A and B virus infections. Journal of International Medical Research, 32(2), 132-140.