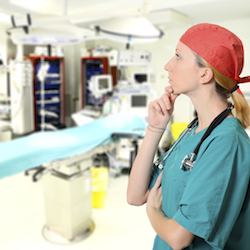 Researchers at the University of Chicago have shown that after a long stay in the Intensive Care Unit (ICU) only a handful of pathogenic microbe species remain behind in patients’ intestines. The team tested these remaining pathogens and discovered that some can become deadly when provoked by conditions that mimic the body’s stress response to illness.  “They’ve got a lot of bad guys in there, but the presence of bad guys alone doesn’t tell you who’s going to live or die,” says John Alverdy, a gastrointestinal surgeon and one of two senior authors on the study. “It’s not only which microbes are there, but how they behave when provoked by the harsh and hostile conditions of critical illness.” 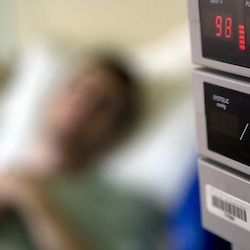 The findings, published in mBio®, the online open-access journal of the American Society for Microbiology, may lead to better monitoring and treatment of ICU patients who can develop a life-threatening systemic infection known as sepsis.

“I have watched patients die from sepsis—it isn’t their injuries or mechanical problems that are the problem,” says Alverdy,  “Our hypothesis has always been that the gut microflora in these patients are very abnormal, and these could be the culprits that lead to sepsis,” he says.

This study supports research for the use of probiotics for post operative liver transplant patients. An unrelated study in Italy confirmed that fiber and probiotics could lower the incidence of bacterial infections and shorten the duration of antibiotic therapy following liver transplantation in comparison to conventional nutrition. The study authors noted, “in contrast to antibiotics, it is relatively cheap and does not cause resistant strains or serious side effects.”

The current study supports this idea. Alverdy and Olga Zaborina, a microbiologist, wanted to know what happens to the gut microbes of ICU patients, who receive repeated courses of multiple antibiotics to ward off infections.

They found that patients with stays longer than a month had only one to four types of microbes in their gut, as measured from fecal samples—compared to about 40 different types found in healthy volunteers.

To check that behavior, the team cultured microbe communities from ICU patients and tested their ability to cause harm in a laboratory model of virulence. The tiny Caenorhabditis elegans worm normally feeds on soil microbes, but when fed pathogenic microbes in the lab, the worms act as a canary-in-the-coalmine indicator of virulence. The more virulent a microbe, the more worms it kills.

Feeding the worms the yeast-plus-bacteria communities did not kill many worms, but when the bacteria were removed, the yeast alone became deadly. In some cases, simply changing the bacterial partner caused virulence. This suggests that even though the two microbes in these communities are both pathogens, they exist in a communal balance in the gut that does not always lead to virulence.

“During host stress, these two microbes suppress the virulence of each other,” says Zaborina. “But if you do something to one of them, then that can change their behavior.”

For example, the team found that adding an opioid drug to the mix—which mimics stress signals released by sick patients—could also switch behavior from a peaceful coexistence called commensalism to virulence for some microbe pairs. The team could prevent this switch to virulence by feeding the worms a molecule that created high phosphate levels in their gut.

Although the study was too small for statistical significance, there was a correlation between microbe behavior and whether a patient lived or died: two patients who were discharged had microbes that coexisted peacefully, but the three who died of sepsis had at least one sample that displayed pathogenic behavior.

The work suggests that doctors should try to find ways to minimize the excessive use of antibiotics and stabilize the microbes that do remain in ICU patients’ guts.   This might be achieved by delivering phosphate or reducing the stress signals in the gut. Such efforts could keep microbes calm and non-virulent, leading to better patient outcomes.

This research was supported by the U.S. National Institutes of Health and the U.S. Department of Energy.