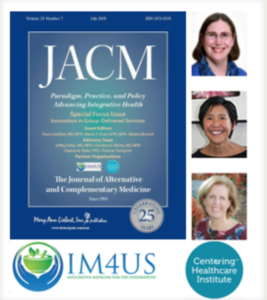 what do you get? Guest editor Maria Chao, DrPh, MPA summed up the nearly 40 submissions this way: “Our editorial team was struck by the heterogeneity of integrative group visits for a range of health conditions, serving diverse patients across the life course and implemented in varied healthcare settings. A unifying theme is the potential for integrative group visits to address unmet needs of underserved and vulnerable patients. In many ways, group visits serve as a critical model towards integrative health equity.” 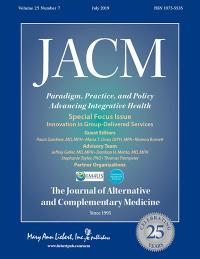 The commentaries and research articles in the JACM Special Focus Issue on Innovation in Group Delivered Services make a potent case for an expanded role for groups not just for those who can pay cash but for all populations in a transformed healthcare system. All the articles are in open access until August 25, 2019 (click on the open access link or image to the left).

Consider the environments represented in the 8 papers, 4 commentaries and 2 editorials of the special issue:

The portrait that emerges is of a delivery method that is just now breaking out of larval stage in US health and medicine. Chao’s fellow guest editor Paula Gardiner, MD, MPH provides context for the movement via a systematic scoping review. I make the case in an editorial for Reversing the Fields: Do Group-Delivered Services Belong Closer to the Center of a Transformed Health Care System? While some may not be willing to go that far, the content of the special issue strongly suggests that any such system concerned with health equity will move rapidly to establish group programs.

Chao, a UCSF associate professor and Gardiner, associate professor at U Massachusetts, are each national leaders in researching and implementing group programs in diverse environments. They were joined by Marena Burnett, a director at Centering Healthcare Institute (CHI), the not-for-profit whose Centering Pregnancy program is forging new territory for inclusion and payment for group-delivered services in community medicine nationwide. CHI joined Integrative Medicine for the Underserved (IM4US) as a Partner Organizaton for the initiative. A short commentary from IM4US leaders describes the organization’s view that groups are “paths to health equity” while one from CHI echoes the theme in sharing their own commitment to the model.

In an editorial, Improving Access, Integration, and Sustainability: A Reflective Overview of the Special Issue on Innovation in Group-Delivered Services, the guest editor team first lays out 7 characteristics that group delivered services – with the exception of group acupuncture – have in common. They conclude with suggestions for next steps for the field and its researchers. They note: “We venture to add that the research that led to this special issue, and the articles included in it, makes the case that increased attention to optimal utilization of integrative group visits will advance the quality of care for a broad range of populations and conditions.”

In his commentary, Jeff Geller, MD, MPH – a pioneer in developing group visits in the FQHC environment – speaks to what he calls the “group-inclusion effect”.

What is known and has been known for a long time is that social networking is important for health and longevity. Simply by being in a group of people with a sense of shared purpose creates community, and having a community improves health outcomes.

Geller then contrasts his “empowerment model” with such group 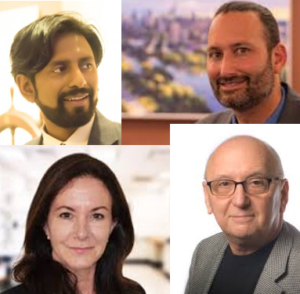 environments as drop in group medical appointments and shared medical appointments that are more practitioner centered: “The empowerment GMV was designed specifically as treatment for lonely people. When the loneliness was treated, medical markers for health and pain improved.” Geller’s rich experience was featured recently in the extraordinary podcast series on group visits hosted by James Maskell of Evolution of Medicine/Functional Forum.

Geller was part of a 4-person advisory team on the special issue that included Stephanie Taylor, PhD, MPH from the VA, Darshan Mehta, MD, MPH from the Benson-Henry Institute and Thomas Trompeter, MPA, the CEO of the Healthpoint multi-clinic FQHC. Trompeter has for decades been a leader in both the community health movement and in providing integrative services to the underserved.

The timeliness of Geller’s essay is underscored by recent field-reversing comments of Stanford pain specialist and US National Pain Strategy leader Sean Mackey, MD, PhD. Where conventional thought was that pain levels drive loneliness and isolation, recent data suggest that loneliness is driving perception of pain and pain scores.  Mackey urged that the “S” for “social” in the biopsychosocial model needs to be elevated in treatment. It is in group delivery.

For integrative health and medicine, group services were – as I share in my commentary — the beginning of legitimacy in the scientific community. The well-researched, ground-breaking and cost-beneficial work of Dean Ornish, MD in reversing atherosclerosis, of Herbert Benson, MD and his team in applying the “relaxation response” to diverse conditions and in Jon Kabat-Zinn, PhD’s Mindfulness Based Stress Reduction were are each multi-week, multimodal programs delivered via groups. Yet they were also typically provided to higher-income, cash-paying clientele. The special issue led by the Gardiner-Chao-Burnett team is replete with evidence of the value of integrative group-delivered services for those less economically fortunate. The message is that the whole population can benefit.

treatment for tonsillar cancer. Gazing around the room at the 2 or 5 or 8 racially mixed and typically lower-income people who quietly cohabited the converted classroom in a community center space with me on a given day, I often mused on what their pains might be while I was under the needles. Some of them must have reflected on the nature of my own pains. Though passively accomplished, it was still healing via the “group inclusion effect” Geller explores.

One cannot help but wonder, in a nation in which the social fabric seems to be coming apart every which way, whether the vastly expanded prescription and experience of group services might have a significant role in not just healing individuals, and communities, but the planet itself. The message in group that we are all in this together is a good one.

Additional notes: Geller and Gardiner will offer a training on group services September 14-15, 2019 in Boston. And Chao, Burnett and I will deliver a 90 minute session on the state of group visits via the lens of the JACM Special Issue at the IM4US conference on August 23, 2019 in Santa Clara.