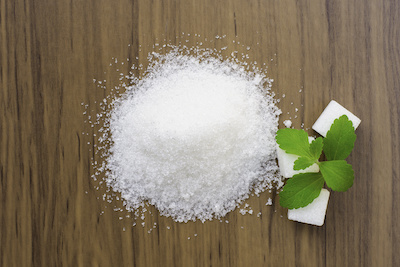 There is clear evidence that high sugar consumption leads to obesity and fatty liver disease. And while synthetic and natural alternatives to sugar are available, there are concerns about how some sweeteners may damage the liver. A new study led by Rohit Kohli, MBBS, MS, shows that stevia extract may actually reduce markers of fatty liver disease. The results of the pre-clinical research, published in the journal Scientific Reports led to a clinical trial, now in progress. I

Using a preclinical model, he tested two non-caloric sweeteners, sucralose and stevia extract. Both are widely available and appear in many sweetened foods and drinks. “We were interested in those two compounds because they are the newest and least studied in the context of liver disease and obesity,” says Dr. Kohli.

The results were striking. “We compared these sweeteners head to head with sugar,” says Dr Kohli.

“Stevia extract lowers glucose levels and improves markers of fatty liver disease.” These markers include fibrosis and fat levels in the liver. The study also uncovered some potential mechanisms that could be responsible for reversing these markers of fatty liver disease. “We saw a decrease in signs of cellular stress and some changes in the gut microbiome,” says Dr. Kohli, “but there is more work to do in order for us to understand the clinical relevance.”

To investigate the effects of non-caloric sweeteners (NCS) on obesity, researchers characterized the phenotype of the WT type mice that received high fat diet but different drinking water containing fructose and sucrose, or Rebaudioside A or sucralose.

The researchers investigated the effects of non-caloric sweeteners on NASH by measuring liver enzymes and examining hepatic histology.

Conclusion/ “Rebaudioside A usage is associated with improved glucose tolerance, less liver fibrosis and inflammation mediated via decreased ER stress. These findings suggest that Rebaudioside A maybe a potential “metabolically healthy” NCS agent and present an opportunity to study the underlying mechanisms of this metabolic-protection afforded by Rebaudioside A consumption.”

“Rebaudioside A, as a type of NCS, appears to down regulate fasting glucose levels and upregulate insulin sensitivity. These effects were achieved possibly through restoring both autonomic nerve innervation and the cell mass of pancreatic islets. Our data suggest that Rebaudioside A- induced hepatoprotection on NASH is at least associated with, or even mediated by, improved pancreatic endocrine function and insulin sensitivity.”