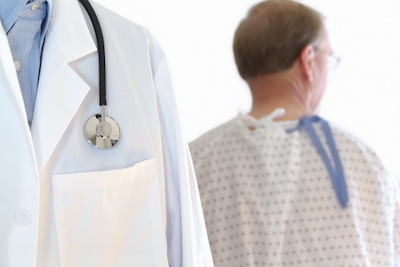 Risk factors for BPH include age, diabetes, cardiovascular disease, hypertension, and metabolic syndrome. The etiology of the disease is not completely known, but inflammatory damage is the most likely cause. Inflammation triggers fibrosis and lack of oxygen to affected tissue, resulting in structural changes in the prostate. This creates a cycle of inflammation-fibrosis-hypoxia-inflammation, which in turn causes glandular remodeling and tissue growth (Berger, et al., 2003; Mishra, et al., 2007).

Traditional treatment options for BPH include medications such as alpha-blockers and 5α-reductase inhibitors or surgical interventions. Side effects of treatments may include the inability to ejaculate, retrograde ejaculation (semen flows backwards into the bladder), erectile dysfunction, and even loss of bladder control. Some men affected have reported that taking saw palmetto, an herbal supplement, gives them relief but clinical evidence for its effectiveness is not conclusive. Clearly, effective and less invasive treatments for this common disease are needed.

PEMF consists of low frequency pulsed energy waves and has been used for a variety of ailments such as various orthopedic conditions. For example, PEMF has been shown to reduce pain and improve function for those afflicted with osteoarthritis. The electromagnetic field is produced by a device that reduces inflammation by promoting growth of new blood vessels, dilation of blood vessels, and tissue remodeling. The overall effect is reduction in tissue hypoxia. These aspects of PEMF make it an ideal noninvasive option to treat BPH (Frey, 1974; Hug and Roosli, 2012).

In this regard, only a few studies have used PEMF to treat enlarged prostate. Two published studies used a desktop PEMF device to treat BPH in men with positive, but variable, results (Elgohary and Tantawy, 2017; Giannakopoulos, et al., 2011). A more recent study in 20 dogs, which also suffer from enlarged prostate as they age, found an average of 57% reduction in prostatic volume following three weeks of treatment with a portable PEMF device, without any interference in semen quality, testosterone levels, or libido (Leoci, et al., 2014).

The current study used a similar PEMF device and treatment program as the dog study. Twenty-seven naive patients with BPH and lower urinary tract symptoms were enrolled. They received a battery of tests including transrectal ultrasound and standardized questionnaires at baseline. They then used a handheld PEMF device (Magcell® Microcirc, Physiomed Elektromedizin) for five minutes twice daily for 28 consecutive days. The tests were then repeated. Nine patients elected to continue therapy for three more months while others discontinued. A final health evaluation was completed at four months for all patients.

“The patients were happy with this simple treatment plan, and we were very pleased that their symptoms significantly improved after only one month of treatment, without any sort of side effects,” noted corresponding author Prof. Andrea Isidori.

The pilot study provided promising evidence for the usefulness of PEMF to treat BPH. The decrease in prostate size was less than that attained in dogs, however. This may be due to differences between dogs and humans in the architecture of prostate tissue and growth characteristics due to BPH. Additional research with a larger number of men and a control group is needed to better understand the optimal schedule and duration of treatment, the impact of treatment on prostate tissue, and the potential use of PEMF in conjunction with traditional BPH therapies.