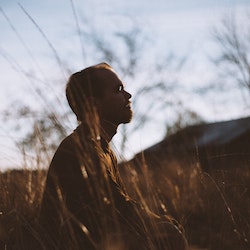 As one ages, our attention span is often met with challenges of fatigue, attention lapses and fluctuations during prolonged sessions of concentration. Regular and intensive meditation, 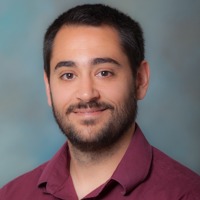 over the course of a lifetime, could help a person remain attentive and focused well into old age. “This study is the first to offer evidence that intensive and continued meditation practice is associated with enduring improvements in sustained attention and response inhibition, with the potential to alter longitudinal trajectories of cognitive change across a person’s life,” says lead author Anthony Zanesco, PhD, postdoctoral researcher at the University of Miami, who began work on the project before starting his Ph.D. program in psychology at UC Davis.

This is according to the most extensive longitudinal study to date examining a group of meditation practitioners. Published in Springer’s Journal of Cognitive Enhancement, the research evaluates the benefits that people gained after three months of full-time meditation training and whether these benefits are maintained seven years later. Zanesco cautions that further research is needed before meditation can be advocated as a sure-fire method for countering the effects of aging on the brain.

The primary study aims were to investigate the maintenance of training-related changes in response inhibition, reaction time variability, and vigilance over a 7-year period, and to assess the moderating influences of aging-related declines in performance and individual differences in continued meditation practice. 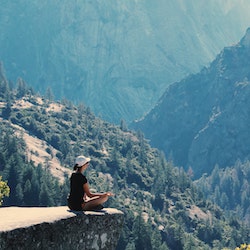 This study follows up on previous work by the same group of researchers at the University of California, Davis in 2011, which assessed the cognitive abilities of 30 people who regularly meditated before and after they went on a three-month-long retreat at the Shambhala Mountain meditation center in the US. At the center, they meditated daily using techniques designed to foster calm sustained attention on a chosen object and to generate aspirations such as compassion, loving-kindness, emphatic joy and equanimity among participants, for others and themselves.

During this time, another group of 30 people who regularly meditated were also monitored. Other than traveling to the meditation center for a week-long assessment period, they carried on with their lives as normal.  After the first group’s initial retreat was over, the second group received similar intensive training at the Shambhala Mountain Center.

1. Meditation training occurred under guidance of B. Alan Wallace, a Buddhist teacher and contemplative scholar.

2. Training included shamatha techniques designed to foster calm sustained attention on a chosen object, and complementary techniques, known as the Four Immeasurables (compassion, loving-kindness, empathetic joy, and equanimity), aimed at generating benevolent aspirations for the well-being of oneself and others (Wallace 2006, 2011).

3. Primary practice involved mindfulness of breathing, in which attention is drawn to the tactile sensations of the breath. Participants also practiced attending to the arising of mental content (e.g., thoughts, perceptions, sensations), a technique known as settling the mind into its natural state, and focusing attention on the sense of awareness itself, known as shamatha without a sign (Wallace 2006, 2011).

4. Participants met twice daily for group practice and discussion, devoted about 6 h of their remaining day to solitary shamatha meditation, and about 45 min to Four Immeasurables meditation. In addition to these formal practice sessions, participants were encouraged to maintain mindful, present-centered awareness throughout their day, and met with Dr. Wallace privately once a week for guidance and advice.

As part of this study, follow-up assessments were conducted six months, eighteen months and seven years after completion of the retreats. During the last appraisal, participants were asked to estimate how much time over the course of seven years they had spent meditating outside of formal retreat settings, such as through daily or non-intensive practice. The forty participants who had remained in the study all reported some form of continued meditation practice: 85 per cent attended at least one meditation retreat, and they practiced amounts on average that were comparable to an hour a day for seven years.

The participants again completed assessments designed to measure their reaction time and ability to pay attention to a task. Although these did not improve, the cognitive gains accrued after the 2011 training and assessment were partially maintained many years later. This was especially true for older participants who practiced a lot of meditation over the seven years. Compared to those who practiced less, they maintained cognitive gains and did not show typical patterns of age-related decline in sustained attention.

We observed robust improvements in perceptual discrimination, response inhibition, vigilance, and RTCV across meditation retreat assessments, and extended our prior investigation (Sahdra et al. 2011) to examine the long-term maintenance of training-related improvements. We observed no significant changes in response inhibition accuracy across the 7-year follow-up interval, and improvements were maintained above half the level of overall training gains for several years following the end of retreat. Furthermore, aging-related performance deficits were moderated by continued meditation practice: older participants who reported engaging in more meditation practice following formal training demonstrated attenuated aging-related performance deficits.

Significant increases in accuracy were observed across retreat 1 training assessments, which were then definitively maintained for at least 4 years following retreat. Improvements (i.e., reductions) in reaction time variability were also observed across retreat, but were lost over the course of follow-up. Interestingly, within-task decrements in performance accuracy and RTCV were attenuated across years of follow-up, but not during retreat, suggesting possible benefits of long-term continued practice. No significant effects of aging were observed. See FIGURE 4. 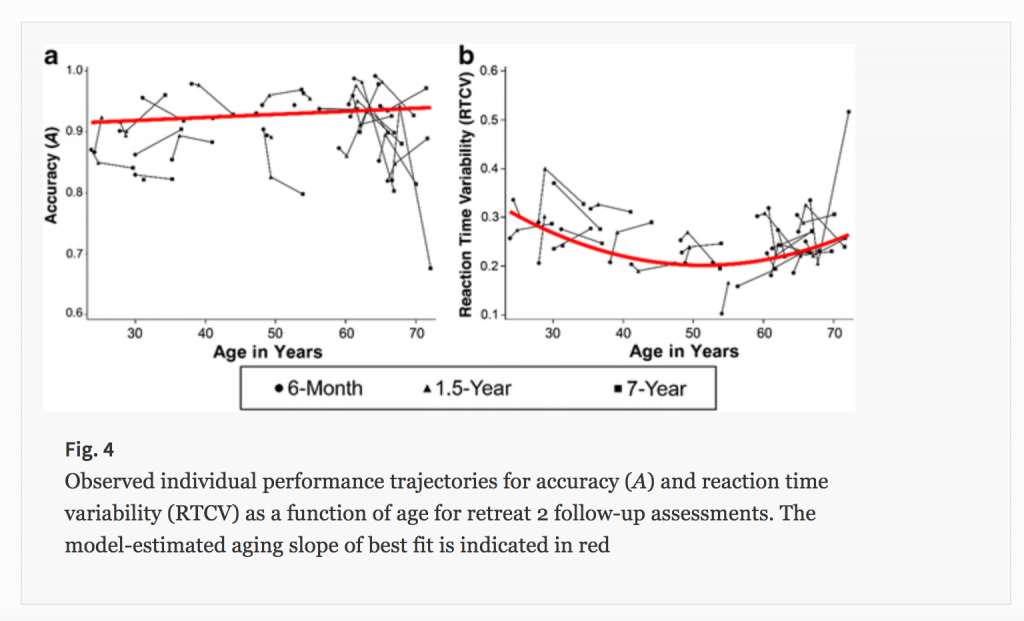 Zanesco is aware that participants’ lifestyle or personality might have contributed to the observations, and therefore calls for further research into meditation as an intervention to improve brain functioning among older people.

He says the current findings also provide a sobering appraisal of whether short-term or non-intensive mindfulness interventions are helpful to improve sustained attention in a lasting manner. Participants practiced far more meditation than is feasible for shorter-term programs that might aim to help with cognitive aging, and despite practicing that much meditation, participants did not generally improve over years; these benefits instead plateaued. Zanesco believes this has broad implications for meditation and mindfulness-based approaches to cognitive training and raises important questions regarding how much meditation can, in fact, influence human cognition and the workings of the brain.