News Round Up: Pros and Cons of Milk Alternative Beverages 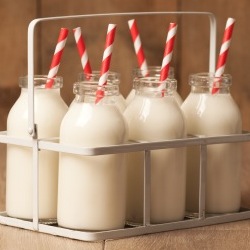 Take a stroll down the dairy or alternative dairy aisle, and you’ll see every imaginable non-milk beverage, including hemp, cashew, oat, pea protein and the ever popular coconut and almond. These milk alternative beverages, also nicknamed ‘mylks,” are increasingly popular even among people who do not have to avoid dairy for medical reasons. As the popularity of these beverages grows, sp have new insights  about whether people may not be getting all the nutrients they need when primarily consuming these milk alternatives. In this story, we review recent studies you should be aware of when your patients tell you they don’t drink dairy milk.

A new study shows that government regulators may also need to consider whether iodine should be added to milk alternative products. A University of Surrey study, published this month in the British Journal of Nutrition, examined the iodine content of 47 milk-alternative drinks (including soy, almond, coconut, oat, rice, hazelnut and hemp, but excluding those marketed specifically at infants and children) and compared it with that of cows’ milk.

This same concern was raised in 2015 from Boston University School of Medicine when four patients were diagnosed with iodine deficiency–induced goiter during a 4-year period in an endocrine clinic in central New Jersey. At the time, researchers considered whether the under use of iodized salts and the overuse of non-iodized kosher and “designer” sea salts might be to blame.

Researchers from Surrey and Boston agree that most adults, children and adolescents are not at risk for a deficiency as they are able to consume the recommended 150mcg per day. However when the recommendations rise to 200mcg, such as during pregnancy, that is when the risk for deficiency becomes very real. A glass of a milk-alternative drink only provides around 2 mcg of iodine

Margaret Rayman, Professor of Nutritional Medicine at the University of Surrey, said: “Many people are unaware of the need for this vital dietary mineral and it is important that people who consume milk-alternative drinks realize that they will not be replacing the iodine from cows’ milk which is the main UK source of iodine.

Boston University researchers recommend that U.S. clinicians manage patients at risk for iodine deficiency with preventive measures. The American Association of Clinical Endocrinologists and other societies currently recommend that U.S. women who are pregnant, lactating, or planning a pregnancy should ingest a daily supplement containing 150 μg of iodine. Patients need to actively seek out such supplements because half of prenatal multivitamin preparations marketed in this country contain no iodine, according to a New England J of Medicine study. Although increasing sodium intake cannot be recommended, patients who already add table salt to their food are best advised to make sure they are using iodized salt.

An American Journal of Clinical Nutrition study published in August 2017 gained a great deal of attention among milk and non-milk drinking parents. The study, took a cross sectional look at 5034 healthy Canadian children, ages 24–72 months, who were enrolled in the Applied Research Group for Kids cohort. They measured  the  volume of non-cow’s milk consumption (number of 250-mL cups per day) and found a dose-dependent association between higher non-cow milk consumption and lower height (P < 0.0001).