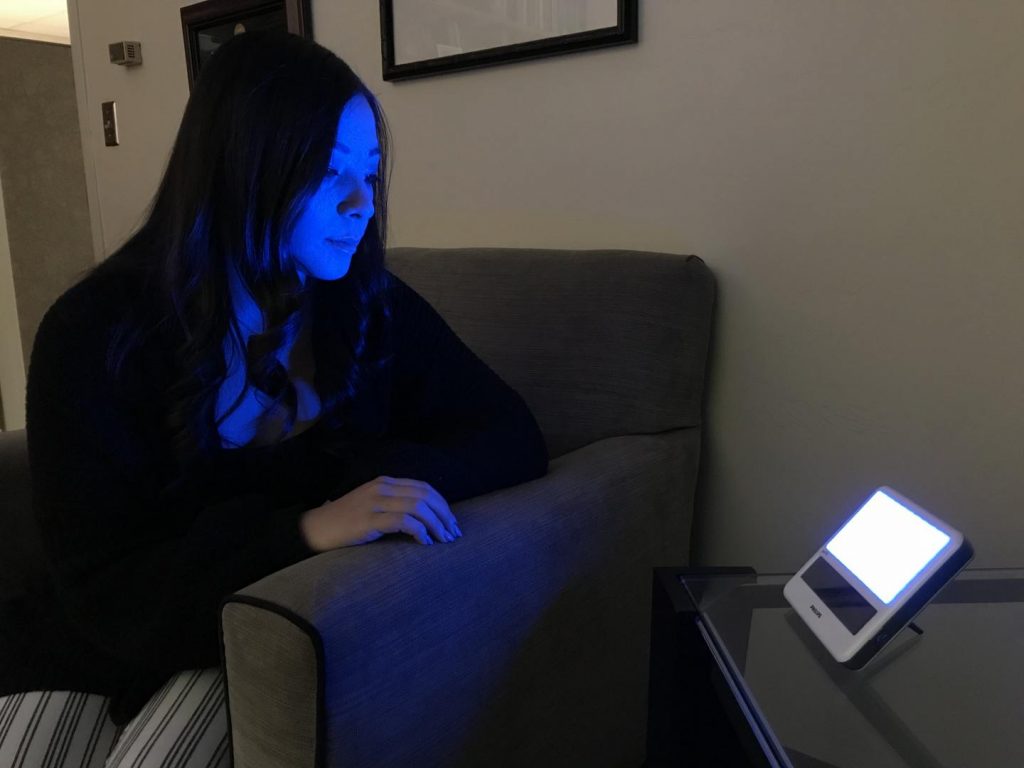 Though exposure to blue light gets bad press, new research shows that the timing of the exposure can be beneficial. Early morning blue light exposure therapy can aid the healing process of people impact by mild traumatic brain injury, according to new research from the University of Arizona.

“Daily exposure to blue wavelength light each morning helps to re-entrain the circadian rhythm so that people get better, more regular sleep. This is likely true for everybody, but we recently demonstrated it in people recovering from mild traumatic brain injury, or mTBI. That improvement in sleep was translated into improvements in cognitive function, reduced daytime sleepiness and actual brain repair,” said William D. “Scott” Killgore, psychiatry professor in the College of Medicine – Tucson and lead author on a new study published in the journal Neurobiology of Disease.

Mild traumatic brain injuries, or concussions, are often the result of falls, fights, car accidents and sports participation. Among other threats, military personnel can also experience mTBI from exposure to explosive blasts: Shockwaves strike the soft tissue of the gut and push a burst of pressure into the brain, causing microscopic damage to blood vessels and brain tissue, Killgore said.

“Your brain is about the consistency of thick Jell-O,” he said. “Imagine a bowl of Jell-O getting hit from a punch or slamming against the steering wheel in a car accident. What’s it doing? It’s absorbing that shock and bouncing around. During that impact, microscopic brain cells thinner than a strand of hair can easily stretch and tear and rip from the force.”

Those with a concussion or mTBI can momentarily see stars, become disoriented, or even briefly lose consciousness following the injury; however, loss of consciousness doesn’t always happen and many people who sustain a concussion are able to walk it off without realizing they have a mild brain injury, according to Killgore. Headaches, attention problems and mental fogginess are commonly reported after head injuries and can persist for weeks or months for some people.

Few, if any, effective treatments for mTBI exist. The U.S. Army Medical Research and Development Command funded the research to find alternatives to medicinal methods of mTBI recovery. “About 50% of people with mTBI also complain that they have sleep problems after an injury,” Killgore said.

Recent research has shown that the brain repairs itself during sleep, so Killgore and his co-authors – John Vanuk, Bradley Shane, Mareen Weber and Sahil Bajaj, all from the Department of Psychiatry – sought to determine if improved sleep led to a faster recovery.

In a randomized clinical trial, adults with mTBI used a cube-like device that shines bright blue light (with a peak wavelength of 469 nm) at participants from their desk or tables for 30 minutes early each morning for six weeks. Control groups were exposed to bright amber light.

“Blue light suppresses brain production of a chemical called melatonin,” Killgore said. “You don’t want melatonin in the morning because it makes you drowsy and prepares the brain to sleep. When you are exposed to blue light in the morning, it shifts your brain’s biological clock so that in the evening, your melatonin will kick in earlier and help you to fall asleep and stay asleep.”

People get the most restorative sleep when it aligns with their natural circadian rhythm of melatonin – the body’s sleep-wake cycle associated with night and day.

“The circadian rhythm is one of the most powerful influences on human behavior,” Killgore said. “Humans evolved on a planet for millions of years with a 24-hour light/dark cycle, and that’s deeply engrained in all our cells. If we can get you sleeping regularly, at the same time each day, that’s much better because the body and the brain can more effectively coordinate all these repair processes.”

As a result of the blue light treatment, participants fell asleep and woke an average of one hour earlier than before the trial and were less sleepy during the daytime. Participants improved their speed and efficiency in brain processing and showed an increase in volume in the pulvinar nucleus, an area of the brain responsible for visual attention. Neural connections and communication flow between the pulvinar nucleus and other parts of the brain that drive alertness and cognition were also strengthened.

Researchers set out to test the effect of blue-wavelength light to shift the sleep patterns of adult patients (aged 18–48 years) recovering from mild traumatic brain injury (mTBI), with the aim of facilitating recovery of brain structure, connectivity, and cognitive performance.

“We think we’re facilitating brain healing by promoting better sleep and circadian alignment, and as these systems heal, these brain areas are communicating with each other more effectively. That could be what’s translating into improvements in cognition and less daytime sleepiness,” Killgore said.

Blue light from computers, smartphones and TV screens often gives blue light a bad rap. But according to Killgore, “when it comes to light, timing is critical. Light is not necessarily good or bad in-and-of-itself. Like caffeine, it all comes down to when you use it. It can be terrible for your sleep if you’re consuming coffee at 10 o’clock at night, but it may be great for your alertness if you have it in the morning.”

He and his team plan to continue their research to see if blue light improves sleep quality and how light therapy might affect emotional and psychiatric disorders. Killgore believes that most people, whether injured or healthy, could benefit from correctly timed morning blue light exposure, a theory he hopes to prove for certain in future studies.