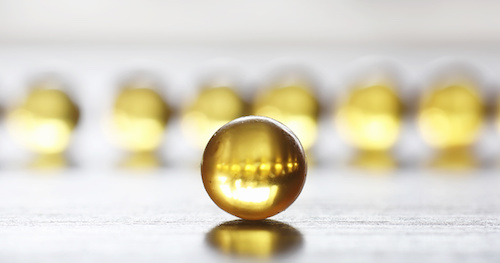 The results could potentially lead to recommendations for higher vitamin D intake as an inexpensive complement to screening tests as a colorectal cancer prevention strategy for adults younger than age 50.

While the overall incidence of colorectal cancer has been declining, cases have been increasing in younger adults — a worrisome trend that has yet to be explained. The authors of the study, including senior co-authors Kimmie Ng, MD, MPH, of Dana-Farber, and Edward Giovannucci, MD, DSc., of the T.H. Chan School, noted that vitamin D intake from food sources such as fish, mushrooms, eggs, and milk has decreased in the past several decades. There is growing evidence of an association between vitamin D and risk of colorectal cancer mortality. However, prior to the current study, no research has examined whether total vitamin D intake is associated with the risk of young-onset colorectal cancer.

“Vitamin D has known activity against colorectal cancer in laboratory studies. Because vitamin D deficiency has been steadily increasing over the past few years, we wondered whether this could be contributing to the rising rates of colorectal cancer in young individuals,” said Ng, director of the Young-Onset Colorectal Cancer Center at Dana-Farber. “We found that total vitamin D intake of 300 IU per day or more — roughly equivalent to three 8-oz. glasses of milk — was associated with an approximately 50% lower risk of developing young-onset colorectal cancer.”

The results of the study were obtained by calculating the total vitamin D intake — both from dietary sources and supplements — of 94,205 women participating in the Nurses’ Health Study II (NHS II). This study is a prospective cohort study of nurses aged 25 to 42 years that began in 1989. The women are followed every two years by questionnaires on demographics, diet and lifestyle factors, and medical and other health-related information. The researchers focused on a primary endpoint — young-onset colorectal cancer, diagnosed before 50 years of age. They also asked on a follow-up questionnaire whether they had had a colonoscopy or sigmoidoscopy where colorectal polyps (which may be precursors to colorectal cancer) were found.

The association was stronger for dietary vitamin D — principally from dairy products — than from vitamin D supplements. The study authors said that finding could be due to chance or to unknown factors that are not yet understood.

Interestingly, the researchers didn’t find a significant association between total vitamin D intake and risk of colorectal cancer diagnosed after age 50. The findings were not able to explain this inconsistency, and the scientists said further research in a larger sample is necessary to determine if the protective effect of vitamin D is actually stronger in young-onset colorectal cancer.

In any case, the investigators concluded that higher total vitamin D intake is associated with decreased risks of young-onset colorectal cancer and precursors (polyps). “Our results further support that vitamin D may be important in younger adults for health and possibly colorectal cancer prevention,” said Ng. “It is critical to understand the risk factors that are associated with young-onset colorectal cancer so that we can make informed recommendations about diet and lifestyle, as well as identify high risk individuals to target for earlier screening.