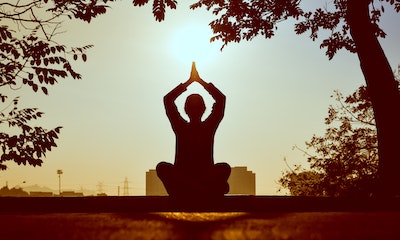 Women with premenstrual syndrome (PMS) commonly complain of sleep disturbances, specifically in the luteal phase of the menstrual cycle. This study looked at the effects of yoga on quality of sleep of women experiencing PMS, as published in Alternative Therapies in Health and Medicine.

adrenal axis in association with the sympathetic nervous system. It also regulates the secretion of cortisol, glucose, and plasma’s renin, epinephrine, and nor-epinephrine in the bloodstream,affecting vagal nerves, which are responsible for body functions. Yoga also reduces negative effects of stress on the immune system by positively regulating the levels of immunoglobulin A.

In this study, women (aged 20-45 yrs) monitored for PMS, were referred to the private obstetrics and gynecology clinics in Tabriz, Iran. Afterward, 62 women, were selected and divided into 2 groups, randomly: 31 subjects in the yoga group and 31 in the control group. Subjects in yoga performed for 10 weeks in three sessions, with each session lasting 60 min. Subjects in the control group did not perform any yoga. Subjects completed a demographic questionnaire and the Pittsburgh sleep quality index (PSQI) questionnaire before and after yoga.

Data from the PSQI questionnaire showed that the following items in the yoga group after exercise significantly improved (P<.05):

Conclusion / Yoga reduced the disturbances of sleep in subjects with PMS. The findings indicate that yoga would have beneficial effects in treating sleep disturbances in women with PMS, but medical treatment will probably be needed in severe situations. To read about each of the week’s yoga movements for each of the instruction weeks, download the study below.