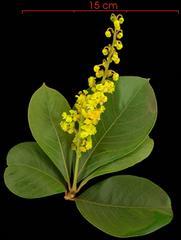 Context • Byrsonima crassifolia is a tropical tree, commonly known as nance and distributed widely in Mexico and Central and South America. Since pre- Hispanic times, the seeds of the fruits have been used in folklore medicine as an anti-inflammatory; however, currently no researchers have examined its potential pharmacological properties in scientific studies.

Objective • This study investigated the anti-inflammatory activity of extracts obtained with the solvents n-hexane, chloroform, and methanol from seeds of B crassifolia.

Design • The research team induced edemas in Wistar rats with 12-O-tetradecanoylphorbol (TPA), formaldehyde, carrageenan, and histamine to study the anti-inflammatory activity of the three organic extracts of seeds from B crassifolia. The team also used the cotton-pellet granuloma method to induce edemas in Wistar rats and study the inhibitory effect of the three extracts from B crassifolia. Finally, the team examined the participation of the nitric oxide (NO) system in the anti-inflammatory activity of the hexane extract of nance seeds (NS), diclorofenac, and L-NAME as well as the effects of L-arginine and D-arginine on the anti- inflammatory actions of the compounds.

Setting • This research was conducted in the Laboratory of Research of Natural Products, School of Chemical Engineering, National Polytechnic Institute (IPN- ESIQIE) and Department of Biotechnology and Bioengineering, Cinvestav-IPN, Av. IPN 2508, Col. San Pedro Zacatenco, Mexico D.F., CP 07360, Mexico. Outcome Measures • The research team measured the edema that the solvents caused, either in the ears of rats for tetradecanoylphorbol or in the paws for formalde- hyde, carrageenan, and histamine. To study the antipro- liferative effects of the extracts after implantation of the cotton-pellet granuloma, the team determined the wet and dry weights of the pellets, after drying at 70°C for 1 hour in the second case. To study the participation of the NO system in the anti-inflammatory activity of the hexane extract of NS, diclofenac, and L-NAME, the research team measured paw edema.

Conclusions • The hexane extract from seeds of B cras- sifolia exhibited significant anti-inflammatory activity in both acute and chronic inflammatory models with a partial contribution of inhibitory actions on some cel- lular inflammatory responses. The anti-inflammatory mechanism of NS may be related to the other isoform (iNOS). (Altern Ther Health Med. 2013;19(1):26-36.)