Frequent intake of aspirin may cut cervical cancer risk by half, according to a study led by researchers at Roswell Park Cancer Institute (RPCI). Frequent intake was defined by five or more years of use of 7 or more tablets per week.  According to the American Cancer Society, 12,900 new cases of cervical cancer will be diagnosed and 4,100 women will die from the disease in 2015. Published in Journal Lower Genital Tract Disease, April 8, 2015. 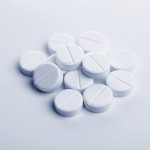 Aspirin use was associated with a 47% reduced risk of cervical cancer among frequent users — those who used aspirin seven or more times a week, regardless of duration — and 41% reduced risk among long-term frequent users — those with five or more years of frequent use. Researchers did not specifically track dosage, but they report the majority intake was 325mg, over baby aspirin. Acetaminophen use was not associated with decreased risk of cervical cancer.

A research team led by Kirsten Moysich, PhD, Professor of Oncology in the Department of Cancer Prevention and Control at Roswell Park, reported the results from the first U.S.-based study to examine the association between regular use of aspirin or acetaminophen.

“Aspirin use remains an attractive cancer-prevention option, due to the fact that most people will be more likely to take a pill rather than make major lifestyle modifications such as quitting smoking, eating a healthy diet and engaging in physical activity. However, people need to talk to their doctor before starting an aspirin regimen,” says Dr. Moysich.

The study examined 328 patients with cervical cancer and 1,312 controls, matched on age and decade, who enrolled in a hospital-based case-control study drawn from 26,831 patients who received treatment at Roswell Park Cancer Institute and completed the Patient Epidemiology Data System questionnaire between 1982 and 1998. Participants provided self-reported information on the frequency and duration of aspirin and/or acetaminophen use.

“Further research is needed,” adds Dr. Moysich, “on the role of daily, long-term use of aspirin and acetaminophen as both cervical cancer chemopreventive agents and enhancement to standard treatment strategies post-diagnosis.”

This information was accessed from Roswell Park Cancer Institute