A new breed of dog, which is loyal and highly trainable with a keen sense of smell, may be the next tool for early cancer detection. The Russian airline Aeroflot and an R&D group have patented the Sulimov dog breed for airport security purposes but realize this particular breed could also assist in cancer detection with far greater accuracy than currently available diagnostic tools. 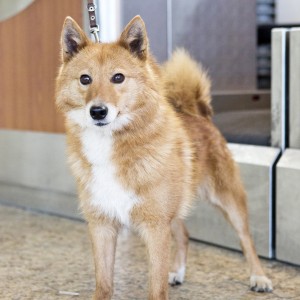 The Sumilov breed, which has been in development for more than thirty years by Klim Sulimov Aeroflot’s chief dog breeder, is a cross of Arctic Herding Laika and the Subtropical Jackal. The new breed is reported to be hardy, friendly, smart and possesses a highly sensitive nose. In subzero temperatures, cold suppresses smells. However this particular dog can still smell effectively in temperatures as low as -70C or as high as 40C.

Dog’s superior sniffers have been tested for decades for early cancer detection. However, most tests used existing breeds rather than dogs bred for specific olfactory superiority. Aeroflot has breed all the best qualities into one dog. But even their lowly cousin canines show remarkable success. The most recent study released in Journal of Urology April, 2015, showed that two female German shepherds were correct in detecting prostate cancer in most than 90% of the cases, as compared to PSA screenings with a mere 20% success rate.

Two German shepherds, Dog One and Dog Two, sniffed urine samples from 900 men, 360 prostate cancer and 540 without cancer with the following results:

However, researchers reviewing the success rate of similar tests, published in Journal of Breath Science (May 2015) said,

“The canine method has some advantages as a potential cancer-screening method, due to its non-invasiveness, simplicity of odour sampling and storage, ease of testing and interpretation of results and relatively low costs. Disadvantages and limitations of this method are related to the fact that it is still not known exactly to which chemical compounds and/or their combinations the dogs react.”

Current prostate cancer testing methods are so poor that perhaps this is an easier and much more pleasant way to detect early signs of cancer. And since men are reluctant to get screened for prostate cancer or undergo invasive biopsies, the dogs may well be man’s best friend for more than one reason.

This article is from materials from the Journal of Urology, click here for abstract.