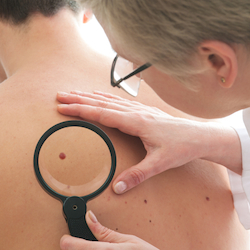 Showing men a video on skin self-examination and skin awareness may help to increase the number of patients who receive whole-body clinical skin examinations (CSEs) from their physicians, which could increase skin cancer diagnosis in older men, according to a study by Monika Janda, Ph.D., of the Queensland University of Technology, Brisbane, Australia, and colleagues. Links: Patient Video posted on YouTube  and from the digital library at the the Queensland University of Techology. DVDs are available on request from the study authors, link here to contact the author.

In the United States, death rates from melanoma have decreased in women but have increased in men. Early detection is an important strategy and can be done with clinical or skin self-examination, according to the study background.

The researchers randomized 930 men (age 50 and older) to receive either a skin awareness video-based intervention and brochures or brochures only (control group). Outcome measures were those patients who reported a CSE, what type (skin spot, partial body or whole body), who initiated it, whether the physician noted any suspicious lesions and how the lesions were managed.

“We acknowledge that routine use of CSE as a screening tool will place a burden on the health care system and could lead to the detection of skin cancers that are relatively indolent and may never cause death or significant morbidity,” the authors conclude. “However, with increasing evidence from observational studies supporting the effects of CSE in reducing the incidence of thick melanomas and melanoma-associated mortality rates and with evidence of potential reductions in the cost-benefit ratio, our results support implementing behavioral interventions to encourage skin awareness among men aged at least 50 years.”