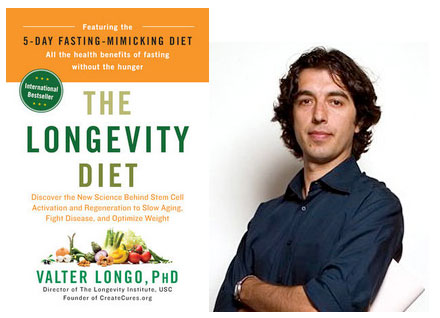 The following is a two-part excerpt of an interview with Valter Longo, PhD. for Integrative 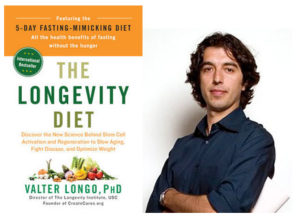 IMCJ: Your lab had developed expertise in cellular protection. How does fasting contribute to that?

Dr Longo: Cellular protection is negatively regulated largely by glucose and protein amino acids. We had discovered these two key paths in yeast and then, eventually, we moved our work to higher eukaryotes.

The two key pathways are activated by proteins, amino acids, and sugars. When activated these pathways-these genes-make cells much more sensitive to all kinds of toxins. So if you fast-for a yeast, a worm, a mouse, or now, we think, a human being-these pathways are shut down. But there is one exception, which is the cancer cell, because the same genes that control protection are also the ones that are always on in cancer cells. That genetic expression provided the foundation for what I call differential stress resistance.

IMCJ: You are saying that not only does fasting protect healthy cells, but it makes the cancerous cells more sensitive to chemotherapy.

Dr Longo: Yes, starvation shuts down these pathways in normal cells and the normal cells go into a shielded mode. The cancer cells cannot-regardless of the type of cancer. Then it gets better, because it turns out there is another problem that the cancer cells have: the inability to adapt to extreme environments. The reason for that is simply a fundamental property of damaged DNA. So if you take a cell and randomly damage its DNA, it becomes progressively dumber, right? Meaning that it can do pretty well in standard conditions, but as you change the environment, it might be unable to do certain things that it used to do. The beauty of fasting is that it makes the environment so extreme, that now cancer cells-not only are they nonprotected, but they have become sensitized. This is what we refer to as differential stress sensitization.

IMCJ: You conducted a trial on mice that offered strong evidence for fasting in cancer treatment. What did you observe in that study?

Dr Longo: The first study was the proof of principle. We used different types of cells in the mice and just wanted to show, in fact, that this worked. We hoped to document that we could starve the system-starve the mice-and they would become protected against multiple types of chemotherapy, but the cancer would not become protected. In some cases the protection was remarkable, so with several different drugs, we kept 100% of the mice alive if they were fasted before the chemo, and 100% of the mice died if they were on the normal diet before the chemo.

IMCJ: This was your first animal study. Have there been more?

Dr Longo: We have done many now; at least 6 or 7 have been published. All have confirmed our results. And, of course, the follow-ups were not just observing the health of the normal cells but also the cancer cells. Last year, we showed that if you combine multiple cycles of fasting and chemotherapy-depending on the tumor and its stage of development, which are all metastatic tumor models in mouse trials-we could get anywhere from 20% to 60% cancer-free survivors. So basically, these mice were cured by the combination, but they did not become cancer-free at all if given either fasting or chemotherapy alone. So fasting alone makes it a little bit better, chemotherapy alone also makes it a little bit better-fasting had about the same effect as chemotherapy actually. But combined, you get 20% to 60% of the mice that become free of cancer.

IMCJ: How was fasting employed in the cancer therapy? And to what degree did you have to go to achieve the result?

Dr Longo: This was 3 days of fasting, which is pretty extreme for a mouse. Either before chemo, or better: Do 2 days before and 1 after. And we knew that this was pushing the mice to the limit, but we were interested in achieving certain markers to feel that the fasting was effective. We monitored several growth factors and other molecules in the blood, and once we got there we felt that it was the right amount of fasting.

IMCJ: For mice, it sounds like 3 days of fasting is about optimal. What are you projecting that it might be for humans?

Dr Longo: We are now doing a number of human clinical trials, and the standard now is 3 before chemo plus 1 after, so it is 4 days. Now, it is not necessarily complete fasting. Because of concerns about safety, we had to keep complete fasting to 2 days before and 1 after. And then we moved to what we call fasting-mimicking diets, used 3 days before and 1 after. They include a few calories so the patients can have food, although it is not very much. They are very calorie-restricted-less than 300 calories per day on some days but over 800 calories on one of the days-but it is much easier on patients, and oncologists, than just telling them to drink water. These are also high-nourishment diets, to prevent and even reverse the micronutrient malnourishment of cancer patients.

IMCJ: Do you feel that it would still be effective for cancers accompanied by cachexia? How would that impact treating a cancer with fasting?

Dr Longo: First of all, cachexia is not very common, meaning that it is common for people at very advanced stages, but not very common for the great majority of patients who are getting treatment. Now we have followed more than 500 people outside of clinical trials who have done fasting together with chemotherapy while being monitored by their oncologists. So far, I do not remember very many cases, if any, of people reporting that they had to stop fasting because they were becoming cachectic and were advised to stop. At the same time, in the clinical trials, we excluded people who had lost more than 10% of their body weight. The reason, of course, is that there is a major concern for someone who has lost a lot of weight. At that point, an oncologist should step in and ask whether fasting is appropriate or not.

IMCJ: What more will attendees at the OncANP conference learn about how fasting impacts cancer by attending your lecture there?

Dr Longo: I will show some data from the clinical trial, so that attendees will be able to see that, and I will talk a little bit about these fasting-mimicking diets that eventually are going be available for them to recommend to patients.

Dr. Longo is the Edna M. Jones Professor of Gerontology and Biological Sciences and Director of the Longevity Institute at the University of Southern California, Davis School of Gerontology in Los Angeles. The Longo laboratory has identified several genetic pathways that regulate aging in simple organisms and reduce the incidence of multiple diseases in mice and humans.

The Longevity Institute in Los Angeles, directed by Dr Longo, includes over 40 faculty members focused on topics ranging from regeneration to dietary interventions to engineering all aimed at improving health and lifespan in the near future. Among the accolades received by Dr Longo are the 2010 Nathan Shock Lecture Award from the National Institute on Aging (NIA/NIH) and the 2013 Vincent Cristofalo “Rising Star” Award in Aging Research from the American Federation for Aging Research (AFAR).