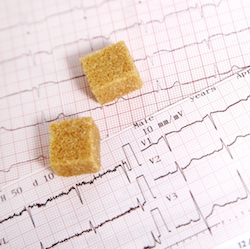 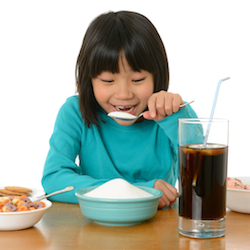 This week a major study in JAMA Internal Medicine closed the lid on America’s sugar bowl with a study that showed a significant relationship between sugar consumption and increased risk of cardiovascular disease (CVD) mortality. See the slideshow for the specific results (JAMA Intern Med., February 03, 2014). The study found an increased risk of dying from CVD in direct correlation to consuming a minimum of seven servings per week (12 oz/day) of sugar-sweetened beverages.

In recent years, sugar has no doubt been a cause-and-effect poster child for diabetes and obesity. However, to say that the connection between sugar and heart disease has been ignored would be a gross understatement.  It wasn’t that long ago that America’s most prestigious association to prevent heart disease – the American Heart Association – not only refused to take a stand on the issue, but the organization also endorsed consumption of sugary foods as heart healthy with their branded logo. The AHA Heart-Check logo was a virtual permission slip to eat sugar.

In 1995, the AHA Heart-Check food certification program endorsed foods as heart healthy if they were low in cholesterol and saturated fat. Companies paid $7,500 to place the heart check symbol on their products. One only had to look down the cereal aisle to see that many sugary and processed grain cereals marketed were endorsed as heart healthy. Many of these brands were popular children’s cereals. Their parents were misled to believe that highly processed grains with added sugars were heart healthy foods because they were low in saturated fat and cholesterol.

This was never more evident when in 2006, while researching a book (Eating Between the Lines, St, Martins Press), the AHA presented the following statement when I requested an opinion on the role of sugar, heart disease and their endorsement of highly processed sugared cereals marketed to children. Here is an excerpt of the AHA statement from the book:

“There simply isn’t enough scientific data that proves sugar plays a role in heart disease. The federal government regulations for coronary heart disease claims identify two criteria for determining whether a coronary heart disease claim may be made for a food product: dietary saturated fat and cholesterol. To be eligible for the Food Certification Program (sic, AHA Heart Check symbol), a food product must meet the American Heart Association’s criteria for being “low” in saturated fat and cholesterol. … Sugar is not a criterion or disqualifier because there is not sufficient evidence to show that sugar is a risk factor for coronary heart disease. The FDA and the American Heart Association are in agreement on the sugar issue. Although sugar has not been directly linked to heart disease the American Heart Association recommends a diet moderate in added sugar as part of an overall eating plan for healthy individuals over the age of two.” Eating Between the Lines, statement in 2006.

Since 1995, those children are now adults and are so attracted to sugar in all its forms that it is both difficult to resist and difficult to recognize. Its presence, in the form of added sugars and simply carbohydrates in processed foods, is so prevalent it is nearly impossible to avoid without eating a diet solely of whole foods.

The over emphasis on low fat and a de-emphasis on sugar and simple carbohydrates created a decision-making quandary for consumers. The fact that this was supported by numerous agencies whose opinions are highly valued by the American public further cemented public opinion that fats were dangerous foods for heart health. With public opinion comes commerce. Naturally, food companies replaced fats with added sugars and simple carbohydrates.

This most recent new study cements the need for a complete shift in public health recommendations. “We are in the midst of a paradigm shift in research on the health effects of sugar, one fueled by extremely high rates of added sugar overconsumption in the American public,” said Laura A. Schmidt, Ph.D., M.S.W., M.P.H., of the University of California, San Francisco, in the study commentary.

If we are to truly see a paradigm shift as Schmidt suggests, it is going to mean removing mixed messaging associated with food marketing and aligning recommendations more closely with medical advice. As pointed out in numerous scientific reviews (Lawrence GD 2013), sound data shows that dietary saturated fatty acids are not associated with cardiovascular disease. “The replacement of saturated fats in the diet with carbohydrates, especially sugars, has resulted in increased obesity and its associated health complications,” says Lawrence.  Yet, low fat is still a highly sought after food label.

That will be painful as these messages are literally ingrained in the minds of the American public. It will take a great deal of education to erase commonly believed perceptions that labels such as low-fat have little to do with heart health, and that sugar and simple carbohydrates are just as damaging to one’s heart health as trans fats.

How can one erase years of duplicitous messaging? Schmidt believes federal guidelines are necessary to facilitate change. “Yang et al underscore the need for federal guidelines that help consumers set safe limits on their intake as well evidence-based regulatory strategies that discourage excess sugar consumption at the population level,” she says.

What would a federal guideline look like? Recommendations for sugar consumption are vague at best. For example, in 2002 the Institute of Medicine recommended sugar make up less than 25 percent of total calories. This new study charts this well into CVD-risk category. Before the study, the American Heart Association recommends limiting added sugars to less than 100 calories daily for women and 150 calories daily for men. This too would place people at risk for CVD.

Can your patients define and stick to moderate consumption on their own? It’s doubtful because cumulative

consumption of highly refined sugars is difficult to track. Consumption of soft drinks is down to levels from 1996. But in all honesty, the small decline of 1.9% makes a bigger impact on company stock values than America’s health. The same year, Americans consumed 9.17 billion 192-ounce cases of sugared soft drinks. That is still approximately 57 billion grams of sugar, which doesn’t account for sweeteners and refined carbohydrates in breads, cereals, snacks, grain-based desserts, fruit drinks, dairy desserts, candy and even children’s vitamins. See the chart for mean percentage of kilocalories from added sugars among adults aged 20 and over, by age group and sex in United States.

Federal guidelines will help, but overall, it will take concentrated messaging from the people consumers trust the most – their doctors. Why? … Physicians and healthcare providers are not politically influenced by food manufactures. The FDA and AHA lost that claim years ago. It’s time for health-care providers to speak up about what they know to be true – healthy fats are essential to human health, and simple carbohydrates are as damaging as pure sugar to the human heart.

Kimberly Lord Stewart is the Director of Content for Today’s Practitioner and author of the book, Eating Between the Lines (St. Martins Press, 2007). She can be reached at editor@stage.todayspractitioner.com