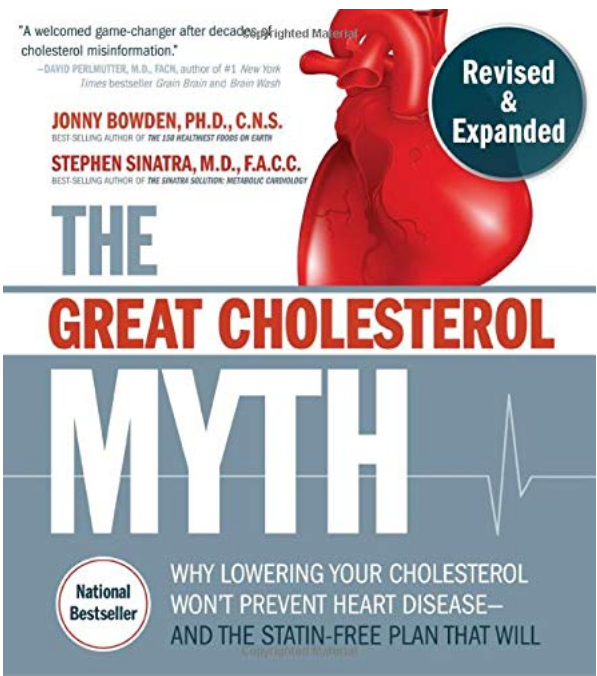 What is the cholesterol myth? Our content partners at WholeFoods magazine shared two articles with us that deserve more attention about why the medical establishments’ reliance on cholesterol numbers may not be telling patient and practitioner what they need to know about cardiovascular disease risk. We’ve collected excerpts of the two articles by Johnny Bowden, PhD, CNS here for you, as well as information on the newly updated book mentioned in the article.

About a decade ago, cardiologist Steven Sinatra, M.D., and I [Jonny Bowden, PhD, CNS) came together to write a book to expose what we believed were two of the biggest—and most destructive—medical myths in the world: One, that heart disease is caused by eating too much fat and cholesterol, and two, that statin drugs are the answer.

The millions of marketing dollars spent on perpetuating this myth have successfully kept us focused on a relatively minor character in the heart disease story—and created a market for cholesterol-lowering drugs worth more than $30 billion a year. The real tragedy is that by putting all of our attention on “LDL cholesterol,” we’ve virtually ignored the real promoters of heart disease: inflammation, oxidation, sugar, and stress.

In the new, updated edition of the book ( The Great Cholesterol Myth, Revised and Expanded) —out in October 2020—we show that cholesterol numbers as they are now tested—i.e. HDL (“good” cholesterol) and LDL (“bad” cholesterol)—are pretty poor predictors of heart disease. Up to 70% of people hospitalized with heart attacks have perfectly normal cholesterol levels, and about half the people with elevated cholesterol levels have perfectly normal, healthy tickers. (Those numbers might change if doctors used the much more modernized version of cholesterol tests, which we discuss throughout the book—but doctors continue to use the old-fashioned “good” and “bad” test, which predicts about as accurately as flipping a coin.) READ MORE.

Why You Should Be Skeptical of Cholesterol Tests: Part 2

In October of this year, cardiologist Steven Sinatra, M.D., and I published the new and revised edition of our book, The Great Cholesterol Myth.

As my co-author, Dr. Sinatra, says in the book:

I’ve come to believe that cholesterol is a minor player in the development of heart disease and that whatever good statin drugs accomplish has very little to do with their cholesterol-lowering ability.

Yes, folks. For  the better part of 40 years we’ve been focused on the wrong molecule in an attempt to prevent cardiovascular and cardiometabolic diseases.

Still skeptical? Take a look at the Nurses’ Health Study, one of the longest-running studies of diet and disease ever undertaken. Conducted by Harvard University, the study has followed more than 120,000 females since the mid-1970s to determine risk factors for cancer and heart disease. In an exhaustive analysis of 84,129 of these women, published in the New England Journal of Medicine, five factors were identified that significantly lowered the risk for heart disease. In fact, wrote the authors, “Eighty-two percent of coronary events in the study…could be attributed to lack of adherence to (these five factors).” READ MORE.

Heart disease is the #1 killer. However, traditional heart disease protocols—with their emphasis on lowering cholesterol—have it all wrong. Emerging science is showing that cholesterol levels are a poor predictor of heart disease and that standard prescriptions for lowering it, such as ineffective low-fat/high-carb diets and serious, side-effect-causing statin drugs, obscure the real causes of heart disease. Even doctors at leading institutions have been misled for years based on creative reporting of research results from pharmaceutical companies intent on supporting the $31-billion-a-year cholesterol-lowering drug industry.

Best-selling health authors Jonny Bowden, PhD, and Stephen Sinatra, MD, give readers a four-part strategy based on the latest studies and clinical findings for effectively preventing, managing, and reversing heart disease, focusing on diet, exercise, supplements, and stress and anger management. LEARN MORE ABOUT THE BOOK.