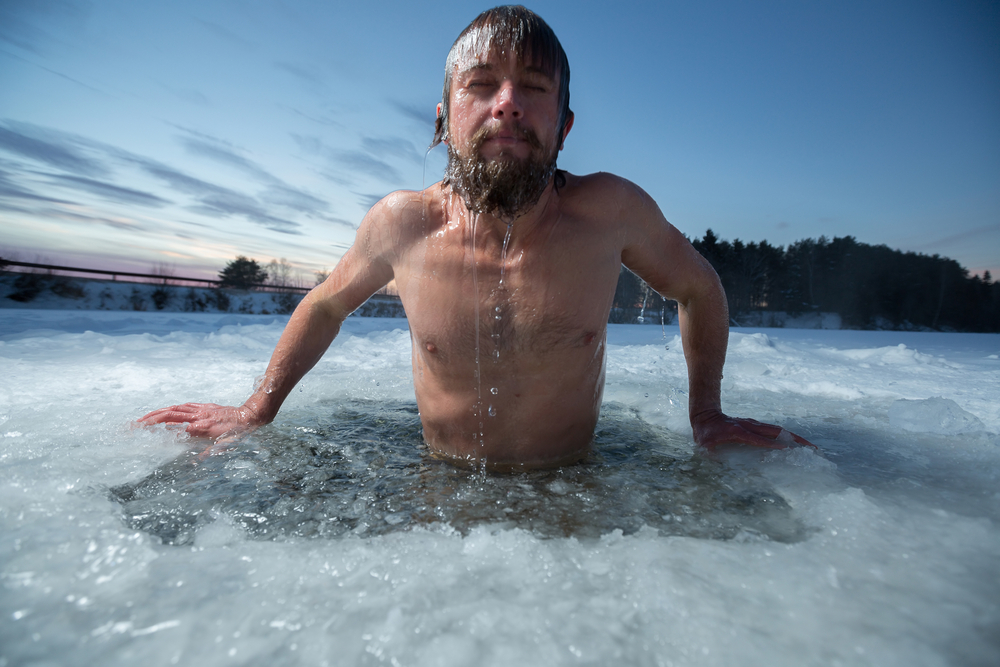 Taking a cold-water swim may reduce “bad” body fat in men and lower the odds developing diabetes, according to a major scientific review published in the peer-reviewed International Journal of Circumpolar Health. The analysis included 104 studies and was conducted at the UiT The Arctic University of Norway and the University Hospital of North Norway.

According to the authors, many of the trials revealed significant effects from cold-water swimming — for example, dips in icy water had a positive impact on “good” fat, which helps burn calories. This may help guard against obesity and heart disease, they add.

The researchers were not able to substantiate the other health benefits of cold-water bathing, an increasingly popular activity. That’s because most of the available research involved small numbers of subjects, just one gender, and with differences in water temperature and salt composition.

“From this review, it is clear that there is increasing scientific support that voluntary exposure to cold water may have some beneficial health effects,” states lead author James Mercer, from UiT. “Many of the studies demonstrated significant effects of cold-water immersion on various physiological and biochemical parameters. But the question as to whether these are beneficial or not for health is difficult to assess.

The authors were also not able to determine whether winter swimmers are naturally healthier.It is difficult to say if the health benefits of cold-water swims come from regular cold exposure or from other factors such as an active lifestyle, stress resilience, social interactions, and a positive mindset.

For the review, scientists wanted to know if voluntary exposure to icy water offers health benefits. Studies where people wore wet suits, had accidental cold-water immersion, or swam in water temperatures greater than 20º C were all excluded from the analysis.

Immersion in cold water has a major impact on the body and triggers a shock response such as elevated heart rate.

Some studies provided evidence that cardiovascular risk factors are actually improved in swimmers who have adapted to the cold. However, other studies suggest the workload on the heart is still increasing.

Cold exposure in water – or air – seems to also increase the production of adiponectin by adipose tissue. This protein plays a key role in guarding against insulin resistance, diabetes, and other diseases.

Regular cold-water swims during the winter significantly boosted insulin sensitivity and decreased insulin concentrations in both inexperienced and experienced swimmers, according to the authors.

However, the authors point out that the profile of swimmers participating in the studies did vary. They ranged from elite swimmers or established winter bathers to those with no previous winter swimming experience. Others were not strictly ice bathers but used cold-water immersion as a treatment post exercise.

Cold-water bathing is not without health risks, say the authors. These include the consequences of hypothermia, and of heart and lung issues that stem from the shock from the cold.

From this review, it is clear that there is increasing scientific support that voluntary exposure to cold water may have some beneficial health effects. However, it is also clear that there is a need for new controlled research studies that are specifically focused on the topic. There are several specific areas regarding the potential preventive health effect of CWI that need further investigation. For example, its effect on the immune system (e.g., tolerance to stress and respiratory infections), potential prophylactic effects on the cardiovascular system and prophylaxis against insulin resistance and improved insulin sensitivity and mental health, are areas that are promising and warrant further investigation. In addition, the educational aspects in respect to both carrying out this activity in a responsible way and learning more about specific beneficial effects also need addressing. In conclusion, it would seem that the question proposed in the introduction to this review concerning the health effects of CWI, based on the published scientific literature described above, has only been partly answered. Until we have more concrete scientific evidence the topic will continue to be a subject of debate.