It’s widely accepted that the delivery mode, whether vaginally or C-section, shapes the manner in which an infant’s healthy microbiota are established. Vaginal deliveries are preferred to help colonize an infant’s healthy bacteria. A new study, published in Cell Host & Microbe, confirmed this understanding and found the cessation of breastfeeding is a significant catalyst for the development of adult-like microbiota.1

This study of 98 Swedish infants identified the origins of the infant’s healthy microbiota and determined when the system was “knocked out of balance.” 2 Fecal samples taken during the infant’s first year of life found a direct link from the birthing method to the infant’s microbiome. The authors noted, “Babies born via C-section had gut bacteria that showed significantly less resemblance to their mothers compared to those that were delivered vaginally.” However, the decision to breast feed or bottle feed was a primary driver of how the infant’s gut microbiome developed.

“Our findings surprisingly demonstrated that cessation of breastfeeding, rather than introduction of solid foods, is the major driver in the development of an adult-like microbiota,” says lead study author Fredrik Bäckhed of The University of Gothenburg, Sweden. “However, the effect of an altered microbiome early in life on health and disease in adolescence and adulthood remains to be demonstrated.”

Recent science shows that gut bacteria are themselves a source of nutrients and vitamins. Their adaptive nature and interaction with other cellular processes plays a significant role in the infant’s metabolism, immunity and even cognitive health.3

This new study supports previous observations that most early bacterial colonizers of the gut are derived from the mother.4,5 The investigators noted that while C-section babies receive less of their mother’s microbes, they are still passed on through the skin and mouth. 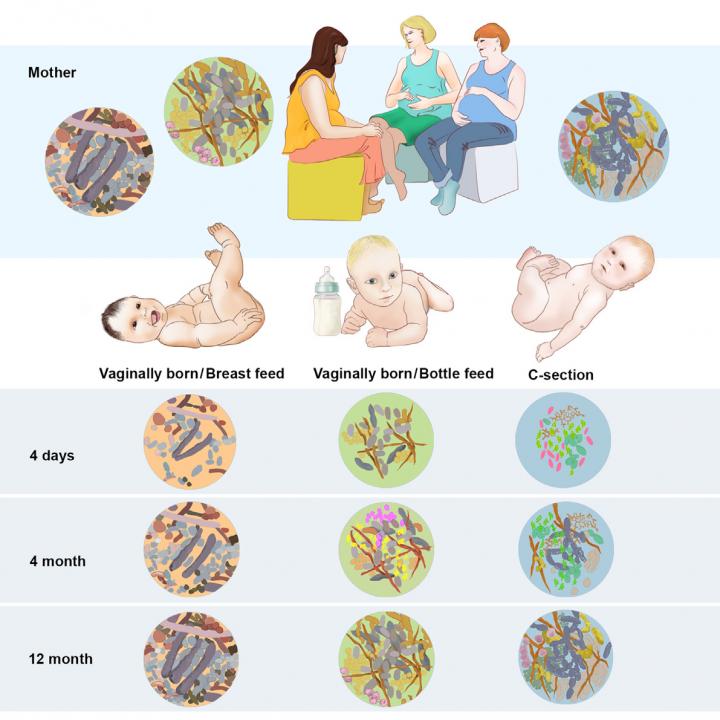 The unique nature of this study tracked the infant’s bacteria development and how respective populations shifted depending on what the child eats. The catalyst for the most dramatic change was the cessation of breast-feeding. This confirms earlier research showing that certain types of bacteria thrive on the nutrients breast milk provides.6 “Once these nutrients are no longer available, other bacteria emerge that are more commonly seen in adults,” the researchers noted in a press statement.7

“Our results underscore the role of breast-feeding in the shaping and succession of gut microbial communities during the first year of life,” the authors write. “The gut microbiota of children no longer breast-fed was enriched in species belonging to Clostridia that are prevalent in adults, such as Roseburia, Clostrium, and Anaerostipes. In contrast, Bifidobacterium and Lactobacillus still dominated the gut microbiota of breast-fed infants at 12 months.”

For more research in how an infant’s gut microbiata develops up to age three, click here to read: Breastfeeding and Intestinal Microbiota.

2.  The infant gut microbiome: New studies on its origins and how it’s knocked out of balance. Press Statement, Eureka Alert, May 13, 2015.