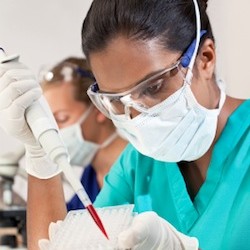 A new mice experimental study shows that at the kick off of the immune response, the molecule sphingosine 1 phosphate (S1P) mobilizes immune cells into the bloodstream to target infection sites and then rapidly shifts position. Researchers say this indirectly amplifies the attack on foreign microbes or the body’s own tissues. This new research provides greater insight into autoimmune inflammation related to inflammatory bowel disease, psoriasis, and multiple sclerosis.

Previous studies had shown that the immune system regulates the concentration of the molecule S1P, in order to draw cells to the right locations. The targeted cells have surface proteins that are sensitive to levels of this molecule, which enables them to follow the molecule’s “trail,” researchers say. And S1P-concentration gradients, for instance, can guide immune T cells to either stay in lymph nodes, connected glands in which these cells mature, or move into blood vessels.

For the first time, researchers at NYU Grossman School of Medicine showed in mice experiments that S1P levels in lymph nodes increase as the immune response mounts. Such activation of immune cells can cause inflammation, swelling, and/or death of targeted cells.

While past work had shown that S1P is produced by cells attached to lymph nodes, the new study found that monocytes, circulating immune cells, also produced it when mice were infected with a virus. This in turn may influence the migration of T cells, a set of white blood cells that expands rapidly in response to infection, say the study authors.

Publishing in the journal Nature online results showed that T cells left mouse lymph nodes less than half as fast when S1P levels rose, while mostly immature cells escaped when S1P levels were not spiking.

“Our research shows a larger role for sphingosine 1 phosphate in coordinating immune defenses in response to infection and inflammation,” says study lead investigator Audrey Baeyens, PhD, a postdoctoral fellow at NYU Langone and its Skirball Institute of Biomolecular Medicine. “While further testing is needed, our findings raise the prospect of controlling levels of S1P to either boost or diminish the body’s immune response, as needed.”

Moreover, the researchers found that when lymph node levels of S1P went up, it signaled T cells to remain in lymph nodes. Such “trapped” T cells, with longer time to mature and become fully armed in the node, increase in their toxicity. These mature T cells can attack cells infected by viruses, or healthy cells as part of autoimmune diseases.

Indeed, medications that block S1P, preventing immune cells from leaving the lymph nodes, are used to curb unwanted and autoimmune inflammation related to inflammatory bowel disease, psoriasis, and multiple sclerosis, a disease for which fingolimod (Gilenya) is one of the few approved treatments. Recent research also supports active vitamin D to control the S1P system in bone metabolism.

Researchers say their findings could also explain why multiple sclerosis patients can experience severe disease relapse immediately after ceasing fingolimod treatment, as T cells held long in lymph nodes are then freed to attack the body’s nerves, a key trait of the disease.

“Now that we have a better understanding of sphingosine 1 phosphate inhibition, we can work on finding new uses for this class of medications, perhaps by manipulating the time T cells spend in the lymph nodes,” says study senior investigator Susan Schwab, PhD. Schwab is an associate professor in the Department of Pathology at NYU Langone and Skirball.

For the study, S1P levels were measured in mice bred to develop symptoms of multiple sclerosis, a disease involving severe inflammation of the brain and spine. They also measured S1P levels in mice exposed to viral genetic material to mimic the inflammation that occurs in infection.

Schwab says the team next plans to study how different S1P levels affect T cell maturation, and how these different maturation times strengthen or weaken the overall immune response to infection.