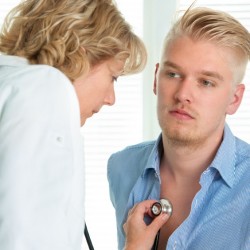 Melatonin has been shown to improve various markers of lung function and/or reduce pulmonary inflammation in numerous settings not having a primary infectious etiology.

Inhibition of the NLRP3 inflammasome is one mechanism by which melatonin has been shown in animals to reduce airway inflammation associated with allergies, COPD, radiation, and LPS-induced acute lung injury.[1],[2],[3],[4] Animal models of pleurisy,[5] allergen-induced asthma,[6],[7] COPD,[8] pulmonary fibrosis,[9] and pulmonary hypertension[10] show improvements in oxidative stress, inflammatory markers, histological abnormalities, function, and/or prevention of disease-related pathology with melatonin as a therapy. An interesting study also looked at the impact of melatonin on leukocyte infiltration and levels of inflammatory mediators associated with sleep deprivation, finding that melatonin helped reduce the pro-inflammatory state in the lungs and altered levels of white blood cells associated with a loss of sleep.[11]

Several human studies have demonstrated that endogenously higher melatonin levels or melatonin as a therapy is associated with positive outcomes in non-infectious respiratory illness as well. In patients with COPD and bronchial asthma, lower levels of melatonin and increased oxidative stress have been shown during periods of disease exacerbation (severe enough to require hospitalization).[12] In preterm newborns with respiratory distress syndrome (RDS), treatment with melatonin has been shown to improve levels of numerous pro-inflammatory cytokines, pulmonary function, clinical outcomes, amount of medical complications such as sepsis or necrotizing enterocolitis (NEC), and even survival rate.[13],[14],[15]

In one such study of newborns with grade III or IV RDS, fairly high doses of melatonin (10 mg/kg) were given at gradually increasing intervals (four doses at 2-hour intervals, two doses at 4-hour intervals, two doses at 8-hour intervals, and two doses at 12-hour intervals) for a total of 10 doses (100 mg/kg over 56 hrs).[16] Blood samples, collected at baseline, 24 hours, 72 hours, and 7 days, showed that, compared to placebo, the newborns receiving melatonin had significantly lower levels of IL-6, IL-8, and TNF-α at most of the timepoints. In a population of 110 infants, with equal amounts receiving placebo and melatonin, there were no cases of NEC or premature retinopathy in the melatonin group while there were two and three cases, respectively, in the placebo group.[17] Additionally, in the melatonin group there was only six cases of sepsis while there was 13 in the placebo group.

A 1995 review, published in the Lancet, discussed two case reports of chronic sarcoidosis treated with 20 mg of melatonin daily.[18] In both of these individuals, there was dramatic improvements not only in dyspnea but also the high-resolution computed tomography (CT) images of the chest and lymphadenopathy. In one of these cases, after ceasing therapy for several months, the dyspnea and skin lesions returned, and were resolved by resuming the 20 mg of melatonin daily.

In a follow-up study of 18 patients with chronic sarcoidosis who were unresponsive to treatment with corticosteroids, melatonin was given at a dose of 20 mg a day for the first year and 10 mg daily the subsequent year.[19] By six months, all patients experienced resolution of cough and dyspnea which did not return during the study. Skin lesions were resolved in the three individuals having this symptom and angiotensin converting enzyme levels were normalized in those who had elevated levels at baseline. Again, there was improvement of pulmonary function, and radiographic images (CT and chest x-ray) showed resolution or dramatic improvement of hylar adenopathy and/or parenchymal involvement in patients where these abnormalities existed.

The antioxidant and immunomodulatory properties of melatonin provide a reasonable explanation for the resolution of the disease activity leading to the development of sarcoidosis, as inflammation and oxidative stress are hallmarks of the disease.[20],[21] Often, in early disease, much like conditions of autoimmunity, there may be spontaneous remission, as the various triggers contributing to these imbalances may cease to exist. In these individuals, it is noteworthy that the condition was responsive to melatonin, while it was not to corticosteroids, a far stronger anti-inflammatory, pointing to the fact that many other factors are at play.

More intriguing, however, is the dramatic improvement of the lung involvement evident by the radiographic images in many of these patients. Eight of the 18 patients had bilateral hylar adenopathy and parenchymal involvement (reticulo-nodular lesions and ground glass appearance) and ten of 18 had parenchymal involvement only. At the 24-month follow up, there was complete resolution of the hilar adenopathy and parenchymal lesions were markedly improved. Additional explanations proposed for these macroscopic improvements are melatonin’s demonstrated actions as an inhibitor of fibroblast proliferation,[22] which thus prevents fibrosis, and inhibitor of excess collagen accumulation.[23],[24] Increased fibroblast activity and collagen accumulation play a role in other fibrotic lung conditions, including those of a post-infectious nature,[25] and is often addressed by medications which intersect with these pathways.[26],[27]

Cellular and animal studies suggest that antiviral activities attributed to melatonin are primarily due to its immunomodulatory and antioxidant effects.[28]

Treatment with melatonin has been shown to reduce viral load and/or virus-related pathology and death in several animal disease models.[29],[30],[31] Melatonin has been shown to have synergistic effects with the antiviral medication ribavirin in the treatment of influenza in animals, significantly increasing animal survival rate.[32] However, in a cell study associated with this, melatonin was not shown to specifically have antiviral effects.

To the knowledge of this author, no studies have been done investigating melatonin as a monotherapy in humans for the treatment or prevention of viral infections, however in combination with a mixture of substances extracted from Aspergillus sp., antiviral properties have been demonstrated in humans.[33] A detailed 2020 review by authors including Russel Reiter, PhD, one of the leading U.S. experts on the topic of melatonin who has authored or co-authored more than 1,000 PubMed-indexed articles on the topic, elucidates the mechanisms by which melatonin may help protect against and reduce the severity of Ebola infection,[34] concluding with a suggested daily dose of 40 mg to reduce the risk of viral infections.

Low levels of antibacterial action have also been demonstrated against gram negative and positive bacteria at concentrations ranging from 0.13 to 0.53 mM.[35] This should be taken in context with physiological melatonin levels which, in plasma, are typically less than 2 x 10-7mM at their peak.[36] It has been suggested that direct antibacterial mechanisms are different than typical antibiotics and melatonin affects bacterial viability by altering levels of intracellular substrates, permeability of cellular membranes, or by acting as a pro-oxidant and forming stable radicals.[37] Much like the setting of viral infections, melatonin’s actions as an antioxidant and immunomodulatory substance have been put forth as mechanisms by which it impacts bacterial infections.[38] Melatonin also has been proposed to have antibacterial activity by increasing levels of interferon (IFN)-γ.

Melatonin’s anti-inflammatory, immunomodulatory, and antioxidant properties also contribute to the improvements that have been seen with melatonin as a treatment for sepsis,[39] where infection-triggered inflammation and oxidative stress can lead to organ damage and failure systemically. The inflammation cascade associated with sepsis not only acutely depletes the body’s protective antioxidants including vitamin C,[40],[41] the cytokines associated with it such as TNF-α and IL-1β also have an effect of suppressing pineal melatonin production.[42],[43],[44] Because melatonin is an important trigger for the synthesis of other antioxidants, including glutathione, and numerous antioxidant enzymes, further problems ensue.[45],[46]

Clinically, a systemic review and meta-analysis of three studies using melatonin as an adjunctive therapy for treatment of neonatal sepsis found significantly greater improvements in C-reactive protein levels and clinical measures of sepsis at 24 hours and three days, respectively, in the infants receiving melatonin in addition to indicated treatment.[47] In one such study of neonatal sepsis, three of 10 children that did not receive melatonin died within 72 hours after diagnosis while none of the 10 children treated with two 10 mg oral doses of melatonin were lost.[48]

In a small study of the impact of melatonin on simulated nocturnal endotoxemia, 12 healthy adult subjects were given an 8 hour infusion containing 100 mg of melatonin or placebo prior to intravenous injection with LPS at midnight.[49] Compared to placebo, melatonin failed to influence any of the inflammatory or oxidative markers assessed over the next eight hours. However, in this study, there are many factors that may have led to the lack of significant differences in those receiving melatonin.

Considering dosage, the 100 mg given to the adults in this study was far less, by weight, than the dose shown to be effective in neonates.[50] Although severe infection and inflammation may suppress endogenous melatonin secretion,[51] studies have shown that melatonin levels are nearly at half of their peak by midnight.[52] Because melatonin levels were already on the rise in all subjects when the inflammatory insult was applied, one might expect that the effects of LPS on melatonin, and melatonin as a therapy, may be seen in subsequent days or with a slightly longer intervention. Additionally, as participants were healthy, without sleep difficulties, not taking any medications, and ranging in age from 18 to 40 years, there were no factors at play to suggest melatonin secretion was less than optimal for normal physiological function.

Currently, a clinical trial is underway evaluating melatonin (50 mg once daily) versus vitamin C (1 g every 6 hours), vitamin E (400 IU every 8 hours), N-acetylcysteine (1200 mg every 12 hours), and placebo given as oral therapies over a period of five days as an adjunctive to conventional treatments in critically ill patients with septic shock.[53]

Clearly, melatonin has a high safety profile which includes settings such as neonatal sepsis, the elderly, and intensive-care and surgical settings.[54],[55]Adverse effects such as sleepiness, dizziness, headache, and nausea are typically mild and transient. Surprising to some, despite the effects melatonin has on sleep latency and total sleep time,[56] studies show melatonin’s sedative effects to be quite mild and transient, and in several clinical studies it has even been given as a morning intervention with little to no untoward effects.[57],[58],[59]

For More , See Part 1 on Melatonin and Respiratory Health