On September 26, 2018, Harvard Medical School announced to its faculty that it is “reassessing” the 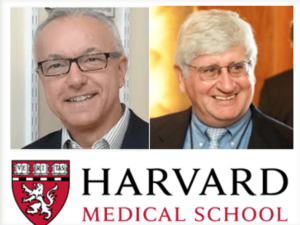 School’s mission statement. An invitation to comment and provide feedback on a draft of a new mission was sent by microbiology and immunology professor Peter Howley, MD. Howley leads a committee for Medical School Dean George Daley, MD, PhD that is wrestling with a transformational theme that most unifies the diverse parties in the movement for integrative health and medicine. Harvard is bellying up toward reckoning with the need to shift the medical industry toward a system for creating health.

The current HMS mission statement lands wholly on a disease focus and the corollary concern with suppressing symptoms. There is not a whiff of a direct interest in engaging the causes of disease, or in health, per se:

To create and nurture a diverse community of the best people committed to leadership in alleviating human suffering caused by disease.”

Howley lauds the institution’s mission. Yet he adds that it “fails to reference fundamental aspects of what we do as a community and why we do it.” Howley’s committee on behalf of the Dean has determined that the present mission doesn’t appropriately “capture what HMS stands for as a school, as a research institution and as an organization committed to improving the human condition.” The memo asks HMS recipients to provide input on the following proposed new statement of mission:

To create and nurture a diverse community dedicated to teaching and learning, discovery and scholarship, service and leadership to improve health and wellness for everyone.”

The framing in Howley’s note diminishes the momentousness of such a change, if it is adopted. The electronic memo reads as though the medical school has had a significant focus on health and wellness all along, that they’d merely forgotten to include something that was squarely in their sights the whole time. Never mind, for instance, that HMS has been famously dismissive until recent years toward a specialty as critical to health and wellness as primary care. Never mind HMS’ leadership, and the leadership of its graduates in hundreds of medical organization throughout the country, in stoking the engines of the sub-specialty favoritism of the $3.3-trillion industry. HMS’s research priorities are principally committed to the pharmacologic, laboratory and high tech industries that thrive as ill-health soars.

Harvard’s move augurs well for the School, and for the nation, given the institution’s power. Yet to present this merely a rewording that owns a long-time, under-appreciated, widespread, shadow, institutional commitment to health and wellness minimizes the challenges in this re-frame. These words are in fact revolutionary.

The context of this shift is best seen as part of an ongoing reckoning for the ship of US medicine as costs and medical deaths continue to soar.  In the April 2013 issue of the American Hospital Association’s (AHA) Hospitals and Health Networks, Douglas Wood, MD, the director of strategy and policy at the Mayo Center for Innovation put it this way, as he mused on what a truly patient-centered approach would ask:

We will realize fairly quickly that we need to change the focus of the health care industry to creating health, not just producing health care.”

Later that year, the American Hospital Association’s chair elect Jonathan Perlin, MD, PhD spoke to the same theme. In a December 2, 2013 subsection called “From Sick Care to Health Care” in article entitled “Toward a Healthier Tomorrow” in the same AHA publication, Perlin shares how hospitals:

… have been honed to focus on sick care. It is a tough transition, but we have to learn how to move from sick care to health care … I’m not sure that any of us – big system; small, rural hospital; academic health center; government; or private sector – fully understands or knows the recipe.”

That same month in a keynote for the Institute for Healthcare Improvement, the organization’s co-founder Don Berwick, MD referenced how the effort to distinguish a health focus from a disease management focus – such as HMS is now considering – had become a regular exercise in those first years of the Affordable Care Act:

It’s fortunately commonplace now to say that we would be better off to re-direct some of our health care enterprise from fighting illness to pursuing health, going from health care to health creation … The more commonplace claim that we don’t now have systems to create health is also correct. Here is the rub: the new way, the way to health, may be vastly further from the current design of care than we may at first wish it to be, or believe it to be.“

Both Berwick and Perlin underscore that an honest swap of mission language drops one quickly into the engine room of the ship of medicine. We need utterly new designs. New recipes. More change than they might have known they were wishing on themselves.

Harvard’s engagement of this paradigm shift recalls a concept futurist Clement Bezold, PhD of the Institute for Alternative Futures uses when he works with clients.  As one thinks of all the possible futures for any organization, institution, nation, globe, or individual, one method is to consider what measures would form an “aspirational” or “preferred” future.  There is without doubt aspirational excitement in the shift Harvard is considering. One’s eyes lift from alleviating suffering,valuable as that is, toward the excitement of devotion “to improve health and wellness for everyone.” 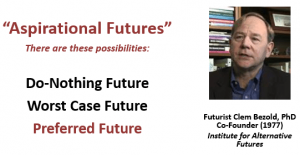 Some of the tools are already present in additional new language in the proposed change for the HMS mission.  “Scholarship” and “discovery” – certainly traits currently in abundance at Harvard – are explicitly highlighted. Yet to take on the systemic challenges Perlin and Berwick call out, such attributes must necessarily be re-purposed. Perhaps more important, in place of accenting the patrician, uni-dimensional focus on Harvard as leader, the proposed mission explicitly calls the institution to be in “service” – a necessarily collaborative engagement.

In the lead up to recent National Academy of Medicine workshop, committee members began with a focus on the systemic issues related to stress, burnout and suicide among health professionals. In the course of the committee’s work, co-led by Mary Jo Kreitzer, RN, PhD and on which I had a chance to serve, the Committee reframed the workshop away from eradicating the “disease” of burnout toward a positive intention. The title of the workshop became “A Systems Approach to Alleviating Work-induced Stress and Improving Health, Well-being and Resilience of Health Professionals.” It was a choice to be guided, illuminated and inspired by the light. Presenters shared emerging models for creating health.

I contacted Kreitzer, the founding and current director of the Center for Spirituality and Healing at the University of Minnesota, for her views on the HMS mission exploration. Via email, she noted her preference the language be of “well-being” rather than “health and wellness,” and also be explicit that “everyone” has a global reach. Then she spoke to the initiative itself:

It is bold and visionary and not unlike the direction of many other health systems and universities today. It will require significant transformation in both learning and clinical environments.”

Credit Harvard’s Dean Daley for opening this critically important dialogue at Harvard Medical School. This is a terrific step. Now let it drive an institutional change process that will, of necessity, require wrestling with the myriad ways that the medical industry’s perverse love of the disease model is presently floating the HMS boat.