In recent years, every major news outlet, and even medical journals, reported that the health risks of sitting at a desk 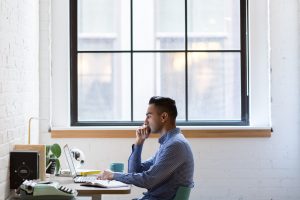 for 8 hours were equal to smoking. It was a bold statement. The news spread faster than office gossip, prompting office workers to switch to adjustable desks that allow standing, or even treadmill walking. Is it true? A group of researchers from the United States, Canada and Australia looked at the finding more closely. While another set of researchers examined how much exercise is needed to overcome the negative effects of prolonged sitting. Today’s Practitioner reviews both studies.

Let’s get the health risks of sitting and smoking study covered first. Research, published in the American Journal of Public Health, says no, sitting does not pose the same health risks as smoking. Despite the widespread media coverage, it’s a myth, says University of South Australia epidemiologist Dr. Terry Boyle, one of nine researchers involved in the evaluation.

The simple fact is, smoking is one of the greatest public health disasters of the past century. Sitting is not, and you can’t really compare the two.” ~ Dr. Terry Boyle

First, the risks of chronic disease and premature death associated with smoking are substantially higher than for sitting. While people who sit a lot have around a 10-20 per cent increased risk of some cancers and cardiovascular disease, smokers have more than double the risk of dying from cancer and cardiovascular disease, and a more than 1000 per cent increased risk of lung cancer.

Finally, unlike smoking, sitting is neither an addiction nor a danger to others. “Equating the risk of sitting with smoking is clearly unwarranted and misleading, and only serves to trivialize the risks associated with smoking.” ~ Dr Boyle

Since many jobs require prolonged sitting, what can you suggest to patients to overcome these risks? A 2016 Lancet study suggests that 60 minutes of exercise per day can overcome the negative health effects of sitting for 8 hours. Fitting in an hour a day of exercise can be difficult to maintain. However, new research, published in Frontiers in Physiology, says that shorter bursts of exercise may be a healthy alternative when it’s not possible to get an hour of exercise into one’s day.

Researchers recruited students to either sit for 180 minutes or sit for the same period with high intensity, 6-minute 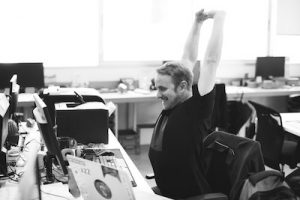 Each subject performed a 6-min protocol (2-min warm-up, 4-min HIIT) using callisthenic exercises, including eight forms of movement, including squats, skipping, and jumping jacks, in 10–20-second sessions at maximal intensity. During the last 4-min of the protocol, all were instructed to “do as many repetitions as you can in 20 seconds.”

Researchers measured cardio-respiratory, blood sugar, blood lactate, body temperature, tissue oxygenation, saliva and blood samples, as well as cognitive function, mood and perceived level of exertion. They found that participants in the HIIT group as compared to the control group:

Overall, interruption of prolonged sitting with a 6-min session of HIIT induced more pronounced circulatory and metabolic responses and improved certain aspects of perception, without affecting the hormonal, thermoregulatory or cognitive functions examined.”

Conclusion / The overall energy expenditure during the 3 hours of sitting and 6-min HIIT was approximately 347 ± 47 kcal, whereas the corresponding value for the 186 min of sitting was 238 ± 43 kcal. From a practical perspective, such a difference, if attained daily, would lead to usage of an additional 765 kcal of energy expenditure per week. Thus, when performed more than once each day (e.g., every other hour), this type of active break could assist in body mass management, as well as reduce the time spent being sedentary.