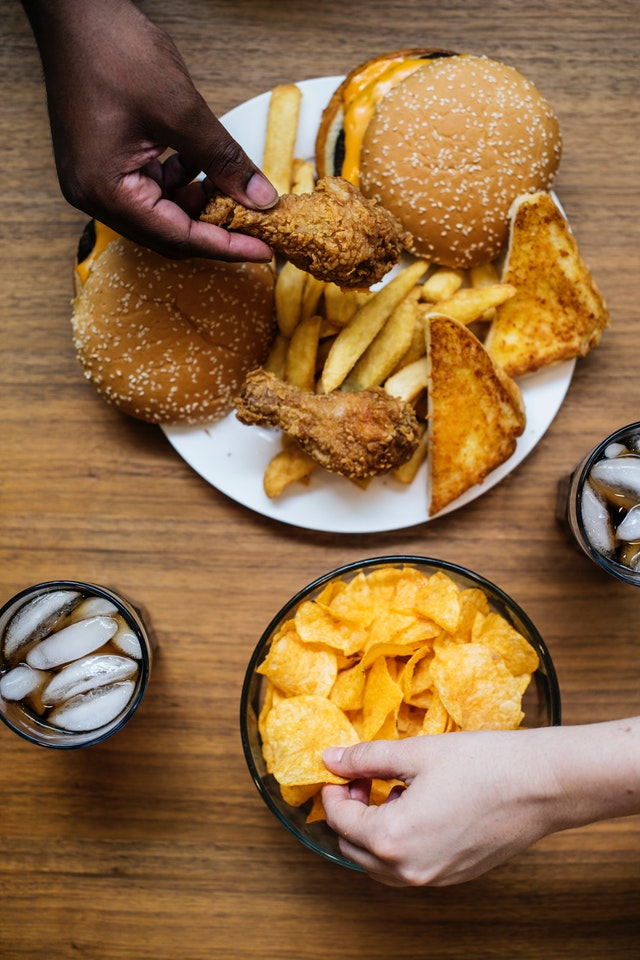 People in almost every region of the world could benefit from rebalancing their diets to eat optimal amounts of various foods and nutrients, according to the Global Burden of Disease (GBD) study tracking trends in consumption of 15 dietary factors from 1990 to 2017 in 195 countries, published in The Lancet.

The study estimates that one in five deaths globally – equivalent to 11 million deaths – are associated with poor diet, and diet contributes to a range of chronic diseases in people around the world. In 2017, more deaths were caused by diets with too low amounts of foods such as whole grains, fruit, nuts and seeds than by diets with high levels of foods like trans fats, sugary drinks, and high levels of red and processed meats (see the graphic below).

Globally, one in five deaths are associated with poor diet

The authors say that their findings highlight the urgent need for coordinated global efforts to improve diet, through collaboration with various sections of the food system and policies that drive balanced diets.

“This study affirms what many have thought for several years – that poor diet is responsible for more deaths than any other risk factor in the world,” says study author Dr Christopher Murray, Director of the Institute for Health Metrics and Evaluation, University of Washington, USA.

“While sodium, sugar, and fat have been the focus of policy debates over the past two decades, our assessment suggests the leading dietary risk factors are high intake of sodium, or low intake of healthy foods, such as whole grains, fruit, nuts and seeds, and vegetables. The paper also highlights the need for comprehensive interventions to promote the production, distribution, and consumption of healthy foods across all nations,” he says.

“Limitations notwithstanding, the current GBD findings provide evidence to shift the focus, as the authors argue, from an emphasis on dietary restriction to promoting healthy food components in a global context. This evidence largely endorses a case for moving from nutrient-based to food based guidelines…, wrote Professor Nita G Forouhi, Medical Research Council Epidemiology Unit, University of Cambridge School of Clinical Medicine, UK.

Impact of diet on non-communicable diseases and mortality

The study evaluated the consumption of major foods and nutrients across 195 countries and quantified the impact of poor diets on death and disease from non-communicable diseases (specifically cancers, cardiovascular diseases, and diabetes). It tracked trends between 1990 and 2017.

Previously, population level assessment of the health effects of suboptimal diet has not been possible because of the complexities of characterising dietary consumption across different nations. The new study combines and analyses data from epidemiological studies – in the absence of long-term randomised trials which are not always feasible in nutrition – to identify associations between dietary factors and non-communicable diseases.

The study looked at 15 dietary elements – diets low in fruits, vegetables, legumes, whole grains, nuts and seeds, milk, fibre, calcium, seafood omega-3 fatty acids, polyunsaturated fats, and diets high in red meat, processed meat, sugar-sweetened beverages, trans fatty acids, and sodium [3]. The authors note that there were varying levels of data available for each dietary factor, which increases the statistical uncertainty of these estimates – for example, while data on how many people ate most dietary factors was available for almost all countries (95%), data for the sodium estimates was only available for around one in four countries.

Overall in 2017, an estimated 11 million deaths were attributable to poor diet. Diets high in sodium, low in whole grains, and low in fruit together accounted for more than half of all diet-related deaths globally in 2017.

The causes of these deaths included 10 million deaths from cardiovascular disease, 913,000 cancer deaths, and almost 339,000 deaths from type 2 diabetes. Deaths related to diet have increased from 8 million in 1990, largely due to increases in the population and population ageing.

The largest shortfalls in optimal intake were seen for nuts and seeds, milk, whole grains, and the largest excesses were seen for sugar sweetened beverages, processed meat and sodium. On average, the world only ate 12% of the recommended amount of nuts and seeds (around 3g average intake per day, compared with 21g recommended per day), and drank around ten times the recommended amount of sugar sweetened beverages (49g average intake, compared with 3g recommended). 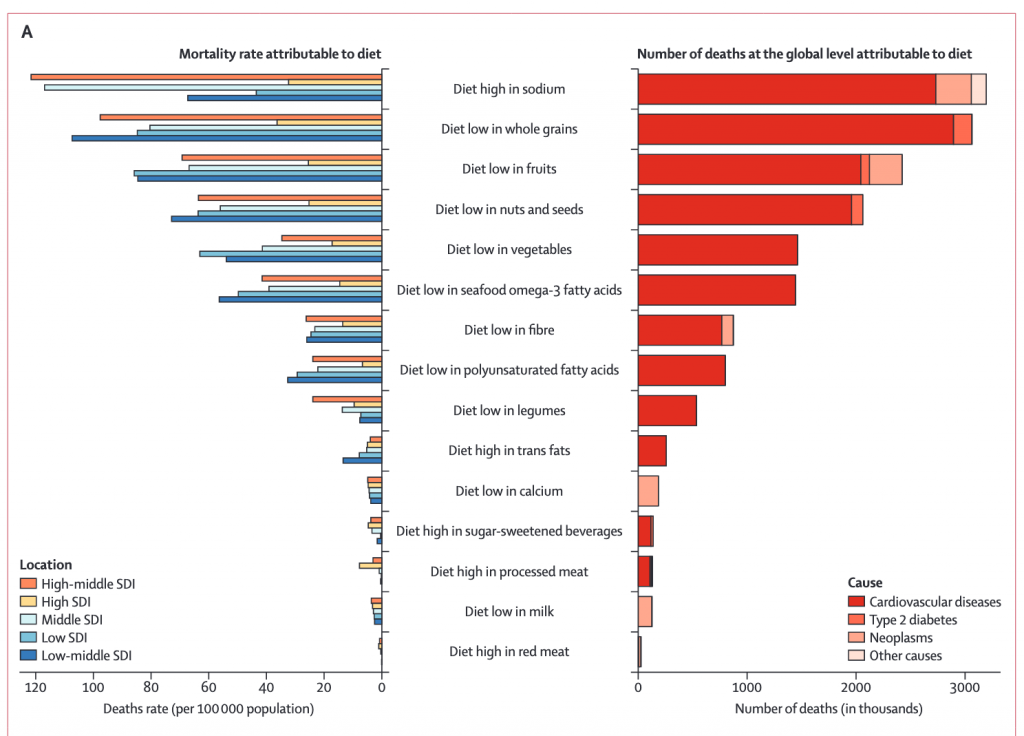 The magnitude of diet-related disease highlights that many existing campaigns have not been effective and the authors call for new food system interventions to rebalance diets around the world. Importantly, they note that changes must be sensitive to the environmental effects of the global food system to avoid adverse effects on climate change, biodiversity loss, land degradation, depleting freshwater, and soil degradation.

In January 2019, The Lancet published the EAT-Lancet Commission, which provides the first scientific targets for a healthy diet from a sustainable food production system that operates within planetary boundaries for food. This report used 2016 data from the Global Burden of Disease study to estimate how far the world is from the healthy diet proposed.

The authors note some limitations of the current study, including that while it uses the best available data, there are gaps in nationally representative individual-level data for intake of key foods and nutrients around the world. Therefore, generalising the results may not be appropriate as most of the studies of diet and disease outcomes are largely based on populations of European descent, and additional research in other populations is desirable. The strength of epidemiological evidence linking dietary factors and death and disease is mostly from observational studies and is not as strong as the evidence linking other major risk factors (such as tobacco and high blood pressure) to ill health. However, most of the diet and health associations are supported by short term randomized studies with risk factors for disease as the outcomes.

For sodium, estimates were based on 24-hour urinary sodium measurements, rather than spot urine samples, which was only available for around a quarter of the countries in the study [3]. Accurate estimation of some nutrients (such as fibre, calcium, and polyunsaturated fatty acids) is complex. As a result, the authors call for increased national surveillance and monitoring systems for key dietary risk factors, and for collaborative efforts to collect and harmonise dietary data from cohort studies.

In addition, the authors only looked at food and nutrient intake and did not evaluate whether people were over- or underweight. Lastly, some deaths could have been attributed to more than one dietary factor, which may have resulted in an overestimation of the burden of diseases attributable to diet.

This study was funded by Bill & Melinda Gates Foundation. It was conducted by researchers from the GBD 2017 Diet Collaborators (full list available at the end of the paper).