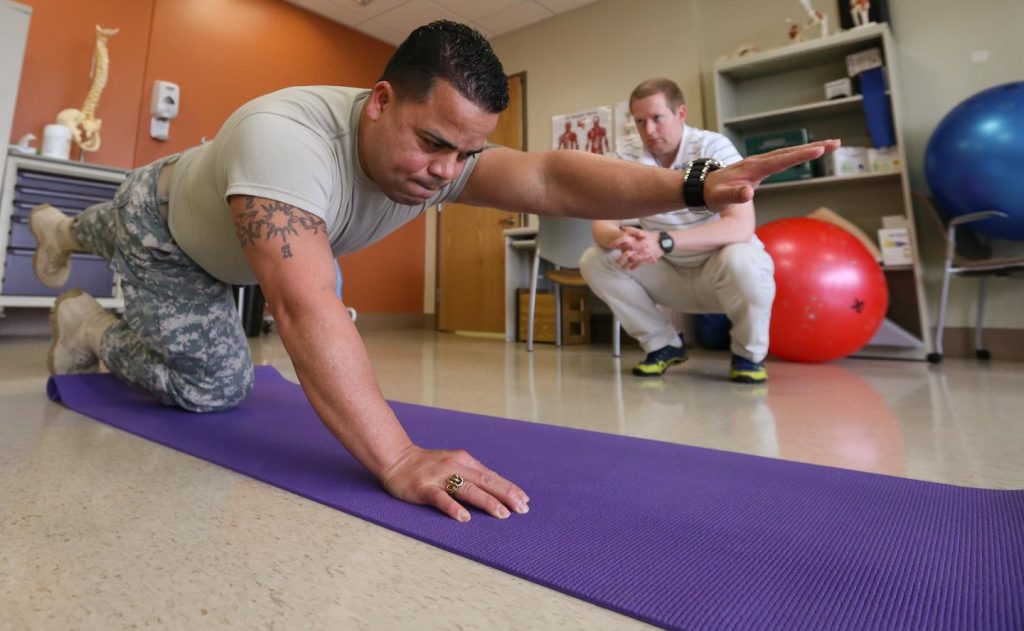 A new study based on Veterans Affairs health records finds that non-drug treatments for chronic pain given to military service members may reduce the risk of long-term adverse outcomes, such as alcohol and drug disorder and self-induced injuries, including suicide attempts. The findings were published in the Journal of General Internal Medicine.

The researchers concluded that service members with chronic pain who received non-drug therapies while in the military, such as massage or acupuncture, had a “significantly lower” risk in VA of new onset alcohol or drug disorder; poisoning with opioids and related narcotics, barbiturates, or sedatives; and suicidal thoughts and attempts. The research team did not study death by suicide.

Dr. Esther Meerwijk, a statistician and suicide researcher at the VA Palo Alto Health Care System in California, was the lead author. Her team reviewed the VA health records of more than 140,000 Army soldiers who reported chronic pain following their deployment to Iraq or Afghanistan from 2008 to 2014. The most common types of chronic pain were joint discomfort, back and neck issues, and other problems involving muscles or bones.

“Chronic pain is associated with adverse outcomes, such as substance use and suicidal thoughts and behavior,” Meerwijk says. “It made sense that if non-drug treatments are good at managing pain, their effect would go beyond only pain relief. However, I was surprised that the results of our analyses held, despite our attempts to prove them wrong. Often enough in research, significant results disappear once you start controlling for variables that can possibly affect the outcome of the study.”

The researchers controlled for length of a service member’s care in VA, whether the Veteran had been exposed to non-drug treatments for chronic pain in VA, and the number of days a VA patient received opioids. They also tested to see if service members who received non-drug therapies for chronic pain were healthier to begin with and if more Veterans who received non-drug therapies died before any of the adverse outcomes occurred.

It’s possible, Meerwijk explains, that soldiers who received non-drug treatments for chronic pain didn’t have to rely on opioids, and are therefore at lower risk for adverse outcomes. “We may also be seeing a genuine effect of non-drug therapies that occurs regardless of whether soldiers use opioids or not,” she says. “If non-drug treatments make chronic pain more bearable, people may be more likely to have positive experiences in life. That makes them less likely to have thoughts of suicide or to turn to drugs.”

Meerwijk’s research is part of the Substance Use and Psychological Injury Combat Study (SUPIC), the largest and longest observational study to date of pain management and behavioral health conditions in Army service members returning from Iraq and Afghanistan. VA has participated in the study, which is led by Dr. Mary Jo Larson of Brandeis University in Massachusetts. Meerwijk became part of the study in 2016.

“When I joined the team, one of the goals was to study long-term effects of non-drug treatments for chronic pain received in the military,” Meerwijk says. “Given my research interests in suicide and suicide prevention, it was suggested we look at suicidal thoughts and attempts as outcomes. Given SUPIC’s interest in substance use, specifically opioids, we broadened the analysis to serious adverse events related to opioid use and chronic pain.”

Chronic pain is often managed with prescription opioids. Especially at higher doses and longer length of use, opioids have been linked to a greater risk of substance use disorder and self-inflicted injuries, such as opioid overdose and suicide attempts.

In the study, the researchers compared service members with chronic pain who did or didn’t receive non-drug therapies and described the links between such treatments in the military and long-term adverse outcomes. They determined that soldiers who received non-drug therapies were at lower risk of being diagnosed with drug use disorders and self-inflicted injuries, such as accidental poisoning and suicidal ideation–which is the thought of taking one’s own life.

The results supported the researchers’ hypothesis that use of non-drug therapies in the military would be linked to fewer negative outcomes for patients in the VA system.

The median age of the cohort was 26, and the median length of deployment was a little more than a year. The researchers focused on outcomes that are tied to chronic pain and opioid use. Alcohol or drug use disorders were the most frequent adverse outcomes, followed by suicidal ideation and self-inflicted injuries including suicide attempts. Poisoning with opioids, related narcotics, barbiturates, or sedatives was least frequent.

Because the study was only observational, based on past treatment data, and didn’t include a randomized clinical trial, it doesn’t show cause and effect–only an association. The researchers did use a method called propensity matching, which allowed them to carefully analyze differences and similarities between those soldiers who received non-drug therapies for pain and those who did not, to try and tease out the effects of that variable.

“We aimed statistically to create groups that, with the exception of receiving non-drug therapies, were as similar as possible,” Meerwijk says. “But we were limited to the observational data we had. That means that the groups may have been different in ways that we didn’t measure and, as a consequence, we don’t know about. We cannot rule out that one of those ways explains why we found what we found.”

Another limitation of the study is that the researchers didn’t look at specific non-drug therapies to gauge the extent to which they may have contributed–or not–to the overall finding.

“Another thing to keep in mind is we didn’t look at effects of individual non-drug therapies. We treated them as one,” says Meerwijk. “Most likely, only some of the therapies that we included are responsible for the effect that we reported, whereas others may have had no effect at all, assuming there’s no other variable that explains our findings.”

Other researchers have found that service members who use non-drug therapies may be healthier to start with than those who do not and, as such, may be at lower risk for poor outcomes. Meerwijk’s team did not find that to be the case. They documented that service members who received non-drug treatments in the military were more often hospitalized and had longer inpatient stays, for example, than their peers who had not received such therapies. They were also more likely to be diagnosed with mental disorders, except alcohol use disorder.

The study was funded by VA, the National Institute on Drug Abuse, and the National Center for Complementary and Integrative Health. Information provided by the VA Palo Alto Healthcare System.