Should you consider seaweed-derived therapies for your patients? For millennia, humans have been consuming seaweeds as vegetables and using them as traditional medicines. In modern times, extracted fractions have been found to contain compounds with useful properties as additives to foods and other products and with beneficial bioactivities in a wide variety of disease states. Some of these extracted compounds—the fucose containing, sulfated polysaccharides known collectively as fucoidans—have demonstrated particularly potent activities in preclinical investigations. Reported bioactivities include antitumor, immunomodulatory, antiangiogenesis, antioxidant, antiviral, antithrombotic/ anticoagulant, and anti-inflammatory effects. This article reviews the most promising of these potentially medicinal bioactivities, providing citations to the original investigations.

Well-known in Asian cuisine but also reported in the anthropologic literature from other prehistoric cultures,

including Native American nations, seaweed has long been included in the human diet. With such a long ethnobotanical history, it is intuitively logical that seaweed is nutritious. In recent years, a growing body of scientific investigation points to many bioactivities potentially beneficial to human health. Of particular interest is the group of compounds derived from brown algae known as fucoidans. Clinical trials are needed to delineate specific uses within specific disease states fully.

However, it is safe to consider that consumption of brown algae as a food is generally 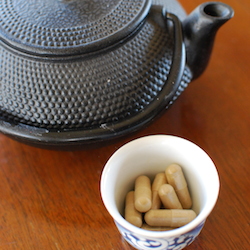 healthful; it is rich in minerals, protein, calcium, iron, iodine, and vitamins while low in calories and fat. Furthermore, it is likely that the use of extracts containing fucoidans can have an adjunctive role in preventing and/or treating certain medical conditions. Given the accelerating pace of fucoidan research in the past 5 to 10 years, the author hopes that definitive clinical trials will be completed that will help to identify and refine these potential uses of brown algae as medicine, from food.