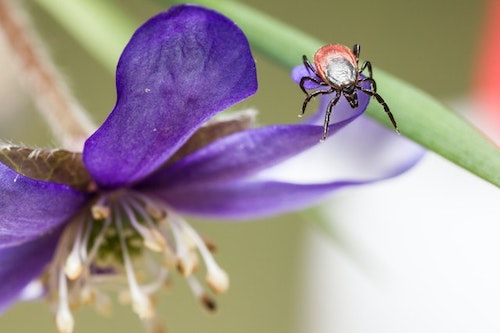 Could specific botanicals play a role in addressing the parasitic disease babesiosis? Early experimental research from the Bay Area Lyme Foundation in Portola Valley, California provides clues as to which herbal medicines have enough potent activity to be studied in the future. Of note: This was a test-tube study, so more research is needed to establish dosage and efficacy.

The researcher published in Frontiers in Cellular and Infection Microbiology, reported test tube comparisions of five herbal medicines with commonly-used antibiotics against Babesia duncani, a malaria-like parasite found on the West Coast of the U.S. that causes the disease babesiosis from a tick bite.

According to the Bay Area Lyme Foundation, current diagnostic tests for babesiosis are often inaccurate, and there is no reliable treatment. In addition to transmission by tick bite, Babesia can also be transmitted vertically from mother to a fetus, and through infected blood transfusions, which is why the US. Food and Drug Administration (FDA) recommends testing blood donations for Babesia.

Symptoms and pathogenesis may vary based on the strain of Babesia, but symptoms can be similar to those of Lyme disease. Babesiosis frequently presents with a high fever and chills, and progresses to include fatigue, headache, drenching sweats, muscle aches, chest pain, hip pain and shortness of breath, and in severe cases can lead to kidney failure.

“This research is particularly important as babesiosis is a significant emerging health risk. Due to limited therapeutics and a rise in treatment resistance, current treatment options for this disease are inadequate and many patients rely on herbal therapies for which there is only anecdotal evidence of efficacy,” said co-author Sunjya K. Schweig, MD, Founder and Director, California Center for Functional Medicine and Scientific Advisory Board Member, Bay Area Lyme Foundation, who has also studied herbal treatments for Lyme disease.

While current treatment protocols for babesiosis recommend use of antibiotics including atovaquone, azithromycin, clindamycin, quinine, and their combinations, these regimens are often associated with treatment failures and significant side effects, even in immunocompetent patients. In addition, epidemiologic studies have documented that up to 23% of patients with babesiosis experienced concurrent Lyme disease and its associated disabling effects.

According to this laboratory study, the five herbal medicines that demonstrated inhibitory activity against B. duncani are:

Scutellaria baicalensis showed good test tube activity against B. duncani, with the IC50 value for baicalein of practically the same as the antibiotic quinine, and up to three times more favorable than the antibiotic clindamycin.

Artemisinin and artemisinin derivatives (artesunate and artemether) alone also had IC50 values that were more favorable than that of quinine and clindamycin. Overall, the study discovered that the bioactive compounds derived from Cryptolepis sanguinolenta, Artemisia annua, and Scutellaria baicalensis, had comparable or even better activity against B. duncani than the commonly used antimicrobial medications quinine and clindamycin.

This is the first study to report the antibabesial activity of Scutellaria baicalensis. However, the antimicrobial and anti-inflammatory activity of Alchornea cordifolia and Polygonum cuspidatum extracts have been previously documented, and other studies have found benefits of combining agents such as compounds derived from Cryptolepis sanguinolenta and an artemisinin-based therapy.

“Increasingly, Americans with chronic diseases are pursuing complementary and alternative medicine to improve general health or quality of life. We hope this data offers inspiration to other researchers to further explore similar options for people living with persistent tick-borne diseases that do not respond to current treatments,” added Dr. Schweig.

These data suggest that it may be advantageous to use these herbs to simultaneously target multiple different pathogens in complex Lyme disease with coinfections. The data also might provide a basis for the clinical improvement of patients who take herbal medicines, particularly those whose chronic symptoms may be due to persistent bacteria that are not killed by conventional Lyme antibiotic treatment. However, it is critical to note that additional studies are needed to further evaluate the five active botanical medicines identified in the study.

Patients should not attempt to self-treat with these herbal medicines due to potential side effects and lack of clinical trials with these products.

“Herbal medicines have been successfully used by various traditional medicine systems and ancient cultures,” said Linda Giampa, executive director, Bay Area Lyme Foundation. “Coinfected tick-borne disease patients frequently experience a greater number of symptoms for a longer duration than those with Lyme disease alone, pointing to the need for novel treatments for babesiosis, one of the most common tick-borne infections after Lyme disease. We hope that findings from this study are an important step towards developing new therapeutic options for doctors and their patients with persistent Lyme disease and other tick-borne infections.”

Conclusion/ These compounds still need to be tested both in vitro and in animal models as well as in clinical trials. While each of these botanical medicines are already in clinical use, it is important for future studies to evaluate them directly in patients using specific clinical treatment regimens, as each have the potential to produce side effects in patients, and should be taken only under the care of a clinician knowledgeable of their capabilities and toxicities.

About Babesiosis/ Babesiosis is a common tick-borne infection of red blood cells by malaria-like parasites called Babesia. Prevalent strains in North America include Babesia duncani, which was first discovered in Washington state and California in the early 1990’s, and Babesia microti, which is endemic to the Northeast and the upper Midwest of the United States. Current diagnostic tests for babesiosis are often inaccurate, and there is no reliable treatment. In addition to transmission by tick bite, Babesia can also be transmitted vertically from mother to a fetus, and through infected blood transfusions, which is why the US. Food and Drug Administration (FDA) recommends testing blood donations for Babesia. Symptoms and pathogenesis may vary based on the strain of Babesia, but symptoms can be similar to those of Lyme disease. Babesiosis frequently presents with a high fever and chills, and progresses to include fatigue, headache, drenching sweats, muscle aches, chest pain, hip pain and shortness of breath, and in severe cases can lead to kidney failure.

Bay Area Lyme Foundation, a national organization committed to making Lyme disease easy to diagnose and simple to cure, is a leading public charity sponsor of innovative Lyme disease research in the US. A 501c3 non-profit organization based in Silicon Valley, Bay Area Lyme Foundation collaborates with world-class scientists and institutions to accelerate medical breakthroughs for Lyme disease. It is also dedicated to providing reliable, fact-based information so that prevention and the importance of early treatment are common knowledge. A pivotal donation from The LaureL STEM Fund covers overhead costs and allows for 100% of all donor contributions to Bay Area Lyme Foundation to go directly to research and prevention programs. For more information about Lyme disease or to get involved, visit http://www.bayarealyme.org or call us at 650-530-2439.