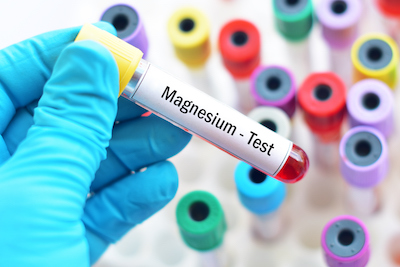 By Stephen Ashmead, MS, MBA / Magnesium, an essential mineral involved in many physiological processes, is a difficult mineral to test for deficiencies. Yet, many individuals are magnesium deficient and can benefit from magnesium supplementation. At issue is that magnesium deficiency does not have any easily recognizable clinical manifestations such as anemia in iron deficiency with its trademark microcytosis (small red blood cells) or osteomalacia  (softening of the bones) due to calcium deficiency.

Another approach for the assessment of magnesium status is urinary excretion level tests. This can be valuable in determining magnesium wasting by the kidneys. These tests provide some information about magnesium excretion and absorption, but again do indicate magnesium levels within the body, and must be collected for a 24-hour period to accurately assess total excretion.

While stable isotopes have been successfully used to measure bioavailability and distribution of other minerals, the problem with this method is the lack of low background stable magnesium isotopes. In order to get any signal at all, dual enrichment with isotopes other than 25Mg (ie 24Mg and 26Mg) becomes necessary. However, currently these tests can only be performed by a few laboratories.1

Does the Form of Magnesium Matter?

Science supports that the form of magnesium and its properties have a significant impact on its bioavailabilty and tolerability.  In a published review of the variety of magnesium compounds available in the United States, DiSilvestro pointed out that it is critical to understand what form of magnesium is being taken or used in clinical studies.1

Multiple studies have contributed to the general acceptance that “organic” minerals are better absorbed than “inorganic” minerals.3 There is no denying that the poor solubility of magnesium oxide plays a role in its absorption. However, this form also has a major alkalinizing effect on the duodenal, jejunal and ileal lumen, particularly in a large doses. This is supported by the Coudray study2 which demonstrated that across both organic and inorganic magnesium salts, there was a consistent decline in solubility from proximal small intestine to colon, matched by a steady rise in pH. This is likely also contributing to the reputation of magnesium oxide being poorly absorbed.

What are Magnesium Chelates?

This structure offers stability and protection, and this form of magnesium has been shown to be well tolerated, and to have demonstrable bioavailability advantages.

The chelation of the Mg2+ ion by two glycine molecules (bisglycinate) reduces the ability of the ion to get complexed with dietary antagonists such as phytates or polyphenols. It also may reduce hydration of the molecule, which could reduce the frequently encountered problem of laxation (typically encountered with magnesium salts). Furthermore, there is evidence to suggest that some of the mineral may be absorbed via the amino acid active transport pathway.4

In keeping with the maxim that nutrient studies of bioavailability need to be conducted in an index nutrient deficient population, Schuette, et al.,6 selected a cohort of ileal-resected subjects, who are well known to have significant magnesium deficiency and poor tolerability to typical magnesium salts. Magnesium in the form of an oxide or bisglycinate chelate were incorporated into stable isotope preparations and tested for bioavailability. The study showed that magnesium absorption in ileal resection patients was lower than healthy controls – as expected. It also demonstrated that both magnesium forms were similarly absorbed, but the chelate offered better bioavailability in the resection patients who had the greatest impairment. The chelate was also better tolerated, and was absorbed earlier (mean 3.2 hours earlier) supporting a more proximal absorption.

Magnesium is well known for gastrointestinal distress in large dosages.  In a tolerability study, subjects received in random order 0, 300, 450, or 600 mg of magnesium as magnesium bisglycinate per day for 4 days followed by a washout period of 3 days minimum.  Bowel habit and gastrointestinal tolerability scores were measured. It was found that there was no significant differences in the number of bowel movements and fecal consistency scores were improved compared to the placebo (0 mg).7  Good tolerability of recommended magnesium supplements is of consideration for practitioners to optimize patient compliance.

While there is still much to learn about magnesium and its many roles in the physiology of the body, it is becoming more evident that the form of magnesium and its properties have a significant impact on its bioavailabilty and tolerability.  Magnesium bisglycinate chelate has been shown to be very well tolerated and have demonstrable bioavailabilty advantages over other forms.  This is an important consideration for practitioners when recommending magnesium supplementation for patients.

Stephen Ashmead, MS, MBA, is a Senior Fellow for Balchem Corporation.  He received a BS degree in Biology, a MS degree in Nutrition Science from the University of Utah, and his MBA from Western Governors University. His area of specialty is in mineral amino acid chelates and their functions. Follow this link for a white paper on the topic.