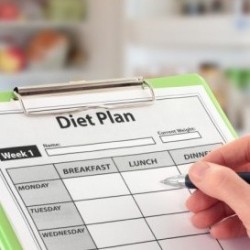 Can a weight loss of one pound a week be achieved with a 3500-kcal deficit? Commentary on a commonly accepted rule

For patients who need to lose weight, more often than not the advice is to drop 3,500 calories from their weekly diet. The general rule is 500 fewer calories per day, leads to one pound o weight loss per week. It’s a convenient number but does it work? One group of researchers says no, weight loss is much more complicated. A commentary in the Dec. 2013 Journal of Obesity says, “The 3500-kcal rule grossly overestimates actual weight loss.” Their study showed at least a 7.4 pound difference between the rule and actual weight loss.

The calculation is based on the formula W(t) = W0 – ΔEB t/3500. In the formula, t represents the day of negative energy balance, ΔEB is the change in energy balance in kcal per day (defined as the difference between the rate of energy intake and the rate of energy expenditure), W0 is baseline weight in pounds, and W(t) represents the expected weight (pounds) on day t. This standard for weight loss is so widely accepted that it is cited in as many as 3,500 weight loss web sits, in addition to textbooks, nutrition journals, scientific articles and even the Surgeon General’s guidelines.

To test the 3500-kcal rule, the researchers searched the literature for weight loss experiments where compliance to diet and exercise interventions were directly supervised in confined subjects or through multiple clinical measurements of changed body energy stores and total daily energy expenditures. Seven studies met the criteria.Five of the studies were performed under confinement conditions with subjects fully monitored at all times.A sixth study confirmed dietary compliance by conducting multiple simultaneous measurements of changes in body energy stores and energy expenditures.The final study was the classic Minnesota Semi-Starvation Experiment where subjects were housed in residence and carefully supervised at all meals and throughout the day.

So how well does the 3,500 k-cal rule predict weight loss? Not very well, say the researchers. The comparison of actual change in weight to predicted change in weight shows the majority of subjects exhibited substantially less weight loss than the amount predicted by the 3500-kcal rule. Subjects lost 20.1±11.3 lbs, 7.4±12.6 lbs less than the 27.6±16.0 lbs predicted by the 3500-kcal rule.

Is there a better weight loss mouse trap? According to the researchers, a better model exists, one that uses a thermodynamically based model. This suggested model is dependent on baseline body composition, age, height, gender, and degree of caloric restriction and result in a curvilinear pattern of weight loss over time rather than the linear pattern predicted by the 3500-kcal rule. In this model, the researchers say the  predicted model more closely represents actual weight loss, with a plus or minus variable of less than a pound.

Then there is the issue of convenience. The 3,500 rule is easy to calculate and provides a quick summary and projected outcome (though possibly incorrect) for the patient and the health professional. The team behind the quashing of the long-held 3,500k-cal rule has come up with three applications that simulate the dynamic model, single individual weight loss predictor:

Both can be saved to your computer and used offline for patient analysis. The programs allow users to view the validated dynamic model weight change predictions in response to changes in dietary intake or low doses of exercise. Weight graphs are automatically rescaled with print-ready capability.