A new University of Melbourne study has found that women who take iron supplements, experience a marked improvement in their exercise performance. Published in the Journal of Nutrition, researchers undertook a systematic review and analysis of the effect of iron supplementation to the exercise performance of women in child-bearing years. Lead researcher, Dr Sant-Rayn Pasricha from the Melbourne School of Population and Global Health found that iron supplementation improved women’s exercise performance, in terms of both the highest level they could achieve at 100% exertion (maximal capacity) and their exercise efficiency at a submaximal exertion. Women who were given iron were able to perform a given exercise using a lower heart rate and at a higher efficiency. 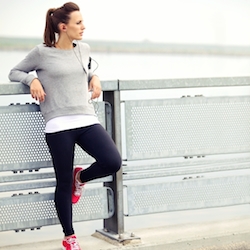 “This was mainly seen in women who had been iron deficient or anaemic at the beginning of the trial and in women who were specifically training, including in elite athletes,” Pasricha said. “The study collected data from many individual smaller studies which generally could not identify this beneficial effect on their own.  However, when we merged the data using meta-analysis, we found this impressive benefit from iron.”

Iron deficiency and anemia are especially common in women of reproductive age (WRA). Clear evidence of benefit from iron supplementation would inform clinical and public health guidelines. The researchers performed a systematic review and meta-analysis to determine the effect of iron supplementation compared with control on exercise performance in WRA. The researchers searched the Cochrane Central Register of Clinical Trials, MEDLINE, Scopus (comprising Embase and MEDLINE), WHO regional databases, and other sources in July 2013. Randomized controlled trials that measured exercise outcomes in WRA randomized to daily oral iron supplementation vs. control were eligible. Random-effects meta-analysis was used to calculate mean differences (MDs) and standardized MDs (SMDs).

It is the first time researchers have been able to confirm that iron supplementation has beneficial effects on exercise performance. Dr Pasricha said the findings could have implications for improved performance in athletes and health and general health and well-being in the rest of the population. “It may be worthwhile screening women, including women training as elite athletes, for iron deficiency, and ensuring they receive appropriate prevention and treatment strategies. Athletes, especially females, are at increased risk of iron deficiency potentially, due to their diets and inflammation caused by excessive exercise,” said Dr Pasricha.