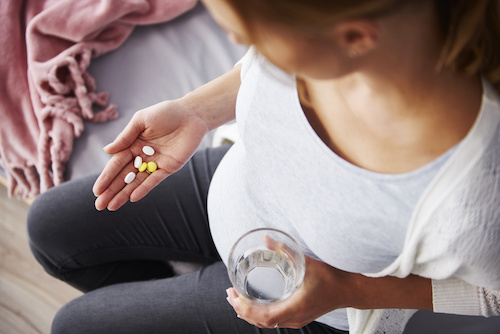 The research published 2019 in Pediatric and Perinatal Epidemiology examined whether acetaminophen in mid-pregnancy and the behavior of the offspring between the ages of 6 months and 11 years, with memory and IQ tested up until the age of 17. Acetaminophen is commonly used to relieve pain during pregnancy and is recommended as the treatment of choice by health agencies in most of the world.

Using questionnaires and school information from Bristol’s Children of the 90s study* in the United Kingdom researchers examined 14,000 children. When they were seven months pregnant 43 percent of their mothers said they had taken acetaminophen sometimes or more often during the previous three months. Researchers examined the results of the children’s memory, IQ and pre-school development tests, temperament and behavior measures.

Researchers found an association between acetaminophen in mid-pregnancy was linked to hyperactivity and attention problems as well as with other difficult behaviors with young children that were not accounted for by the reasons why the medication was taken or social factors. However, this was no longer the case by the time the children reached the end of primary school. Boys appeared to be more susceptible than girls to the possible behavioral effects of the drug.

Deeper look at the results

We then used multiple regression to assess the level of association between acetaminophen intake and each of the 56 outcomes after adjustment for the 15 potential confounders; after adjustment 12 of the 56 remained significantly associated. The 12 variables were almost entirely features of hyperactive or attentive behavior:

The study was led by Professor Jean Golding OBE who also founded the University of Bristol’s Children of the 90s study. She commented:

“Our findings add to a series of results concerning evidence of the possible adverse effects of taking paracetamol during pregnancy such as issues with asthma or behavior in the offspring. It reinforces the advice that women should be cautious when taking medication during pregnancy and to seek medical advice where necessary.”

“It is important that our findings are tested in other studies – we were not in a position to show a causal link, rather an association between two outcomes. It would also be useful now to assess whether older children and adults are free of difficult behavioral problems if their mother had taken paracetamol,” said Professor Golding.

Two other major European studies have used longitudinal cohorts the issue of taking paracetamol during pregnancy and child behavior. Both studies had controlled for a variety of potential confounders:

A study by Brandlistuen using the Norwegian mother and child cohort study, found adverse development and behavior of three-year-old children and increased risk of a diagnosis of ADHD in the offspring of women who had taken acetaminophen more often than eight days during pregnancy.

Another study by the University of California using the Danish National Birth Cohort also found an increased risk of ADHD and of ADHD-like behavior at seven-years old if the mothers had consumed acetaminophen during pregnancy.

Conclusion / Previous epidemiological studies concerning possible adverse effects of acetaminophen consumption in pregnancy have suggested associations with cognition, and childhood behavior, particularly involving hyperactivity and/or attention problems. The researchers conclude: “If acetaminophen use in mid‐to‐late pregnancy has an adverse effect on child neurocognitive outcome, it appears to mainly relate to the preschool period. It is important that these results be tested using other datasets or methodologies before assuming that they are causal.

*Based at the University of Bristol, Children of the 90s, also known as the Avon Longitudinal Study of Parents and Children (ALSPAC), is a long-term health research project that enrolled more than 14,000 pregnant women in 1991 and 1992. It has been following the health and development of the parents, their children and now their grandchildren in detail ever since. It receives core funding from the Medical Research Council, the Wellcome Trust and the University of Bristol.