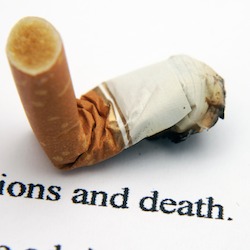 The biggest threat to global health and wellness can be narrowed down to six, preventable non-communicable diseases: respiratory illness from tobacco use, harmful alcohol use, salt intake, high blood pressure and blood sugar, and obesity. According to a May 2014 Lancet study, if nations could reduce target levels for these lifestyle related diseases in the next 25 years, 37 million early deaths would be prevented. But by not reaching these targets, an additional 10.5 million deaths would occur as compared to the 28.3 million who died in 2010. And while experts say this could be possible, critics say apathy from leadership is the biggest obstacle to achieving the desired target.

For background, from September 19-20, 2011 at the United Nations General Assembly, member states met in New York to address the growing problem of mortality from non-communicable diseases (NCD). The assembled countries approved a plan that acknowledged the global burden and threat of non-communicable disease as one of the “major challenges for development in the twenty-first century.”

From this meeting, a project called the 25X25 was adopted to begin to assess and address the primary NCDs that contribute to early mortality. A Lancet study released earlier in May 2014, was the first to analyze the impact that reducing globally targeted risk factors will have on the UN’s target to reduce premature deaths from NCDs by 25% relative to 2010 levels by 2025. 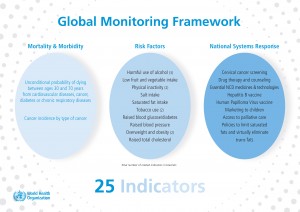 The report identified health equity disparities based on income, citing more than 80% of cardiovascular and diabetes deaths, and almost 90% of deaths from chronic obstructive pulmonary disease, occur in low- and middle-income countries.

Overall, the study suggests that meeting the targets for six modifiable risk factors would reduce the risk of dying prematurely from the four main NCDs by 22% in men and 19% for women in 2025 compared to what they were in 2010. Worldwide, this improvement is equivalent to delaying or preventing at least 16 million deaths in people aged 30 years and 21 million in those aged 70 years or older over 15 years.

The authors predict that the largest benefits will come from reducing high blood pressure and tobacco use. They calculate that a more ambitious 50% reduction in prevalence of smoking by 2025, rather than the current target of 30%, would reduce the risk of dying prematurely by more than 24% in men and by 20% in women.

“Our findings show that achieving risk factor targets will make an essential contribution to achieving the 25×25 mortality target by accelerating the decreasing trends in mortality from cardiovascular diseases and chronic respiratory diseases, lowering mortality from lung and stomach cancers, and reversing the rising trend in diabetes mortality. Most of the benefits will be seen in low-income and middle-income countries where as many as 31 million deaths could be prevented,” says Professor Majid Ezzati from Imperial College London, UK.

In a commentary, Professor Rifat Atun from Harvard School of Public Health, Harvard University, Boston, MA, USA said: “With political will and leadership, the 25×25 targets are well within reach. But despite robust evidence, well-proven cost-effective interventions, and a compelling case for action made by [this study] to address risk factors for NCDs to save millions of lives, political apathy prevails. Even with much discourse, meaningful and durable action against NCDs is scarce, with little accountability to achieve the promises made and the targets set at the General Assembly in 2011. Such apathy is shown in the unacceptably low levels of overseas assistance for health allocated for NCDs, which in 2011 was a paltry $377 million, out of a total of about $31 billion of development assistance for health in 2011, despite NCDs accounting for 50% of the disease burden in low-income and middle-income countries. None of the innovative financing, which has helped so much to tackle HIV, malaria, tuberculosis, vaccine preventable diseases in children, and more recently maternal health is targeted at NCDs.”