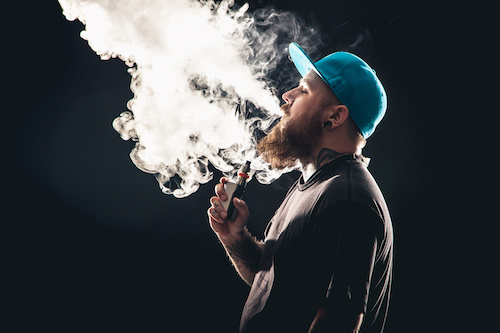 Study 1: E-Cigarette Use is Associated with Altered Lipid Profiles in the CITU Study (Oral Presentation Mo3106)

Researchers evaluated healthy adults (ages 21-45) without existing cardiovascular disease and taking no daily medications in the Cardiovascular Injury due to Tobacco Use (CITU) Study. The study’s 476 participants included 94 non-smokers; 45 e-cig smokers; 52 e-cig and t-cig smokers; and 285 t-cig smokers. The analysis was adjusted for age, race, sex, and non-smokers, sole e-cig or t-cig use, or combination e-cig and t-cig use.

Among the study’s findings:

Smoking e-cigarettes is associated with coronary vascular dysfunction, and the effect might be worse than from smoking traditional cigarettes, according to another study.

Researchers analyzed heart blood flow, a measure of coronary vascular function, of 19 young adult smokers (ages 24-32) immediately before and after smoking either e-cigarettes or traditional cigarettes. They examined coronary vascular function by myocardial contrast echocardiography while participants were at rest and after performing a handgrip exercise to simulate physiologic stress.

“In smokers who use traditional cigarettes, blood flow increased modestly after traditional cigarette inhalation and then decreased with subsequent stress. However, in smokers who use e-cigs, blood flow decreased after both inhalation at rest and after handgrip stress,” said study author Florian Rader, M.D., M.S., medical director of the Human Physiology Laboratory and assistant director of the Non-Invasive Laboratory, Smidt Heart Institute, Cedars-Sinai Medical Center, Los Angeles. “These results indicate that e-cig use is associated with persistent coronary vascular dysfunction at rest, even in the absence of physiologic stress.”

“We were surprised by our observation of the heart’s blood flow being reduced at rest, even in the absence of stress, following inhalation from the e-cigarette,” added study co-author Susan Cheng, M.D., M.M.Sc., M.P.H., director of Public Health Research, also at Cedars-Sinai Medical Center. “Providers counseling patients on the use of nicotine products will want to consider the possibility that e-cigs may confer as much and potentially even more harm to users and especially patients at risk for vascular disease.”

According to Rose Marie Robertson, M.D., FAHA, the American Heart Association’s deputy chief science and medical officer, “There is no long-term safety data on e-cigarettes. However, there are decades of data for the safety of other nicotine replacement therapies.” She advises that if your patients want to stop smoking that the best option is FDA-approved cessation methods. And if people choose to use e-cigarettes as means to stop smoking other tobacco products, they should also plan to subsequently stop using e-cigarettes, because of the lack of information on long-term safety and a growing body of data describing physiologic effects of the components of these devices and the chemical combinations used in them, Robertson said.